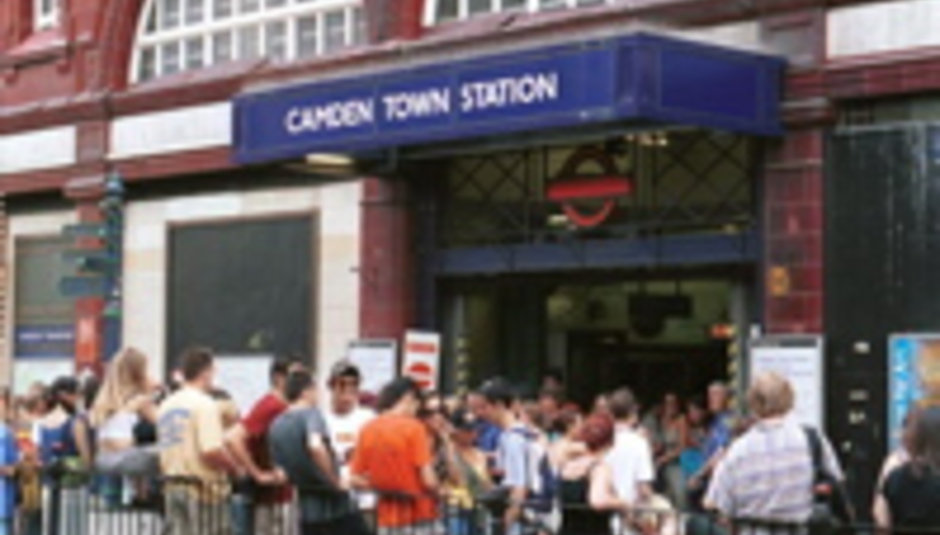 The Camden Crawl™ is an incessant pitch of desperate dreams and stained ale teeth; a rotter’s journey to the centre of the Dublin Castle [indie development hell] that celebrates punctuality and order over diminished responsibility and leather jackets. A playground for the sensible band warrior, offering Joe Punter the opportunity to see all his favourite junior artists in one long stretch, over a concrete path of Converse-tread doom.

As a result of such intense clock watching and substantial distances between bear savaged boozers, as well as the fact that it makes a really healthy tax write off, Drowned in Sound has hired us a helicopter. The one condition: Raz must not fly.

And such opportunities must be relished. Despite the quantity of broken glass, colonel chicken shreds and baying Bloc Party fans surrounding the streets of NW1, all performances, long and short, pretty and pathetic were covered. No band was left unjudged, no bar untouched, no scenester unloved. This was war, and this was won.

It’s getting on. Late. The darkness is closing in. As we perch over the Lock and head down the hill towards Dingwalls, the line looks long. The line looks ¡Forward, Russia! are playing long. Entering shall be a challenge. In. Cloak and dagger, stuff.

We, fearless, graze past a sulking Steve Lamacq. “I’m a victim of my own success,” shouts Steve. Yes. Yes, you are.

¡Forward, Russia! are the moment, a special sinking sense of success. With a toot and a horn here, a coconut lyric there, the Yorkshiremen graze solidly and gaze starwards past all preconceptions of their dischordant damage. Two years ago, this was a rabid demo mess of post-Fierce Panda promise and Q And Not U panics, but NOW this is a simple path of alt-skewed indie pop. This is their At The Drive-In goes terminal on Jools Holland moment; this is the disco ducking, punk rocking, focus of the evening, complete with Paintbox drum solo (read: former editor of DiS hits things harder than girls) and Russell Bloc Party guitar licks:

With new Shoreditch haircuts Larrikin Love look perched ready to careen into Nathan Barley's back garden but not on some space-scooter, oh no they're riding on some kind of 1940's ramshackle scooter they've borrowed off Razorlight who got it off eBay from some band called Cast who had it handed down from Madness. The crowd looks bewildered and a little disinterested but hang around just in case this lot really are the enemy's new Libertine.

Macabre? Not ruddy likely… The Maccabees are just about the most fun you can have whilst still warningly poking your beer bottle at old people. There's none of this dark side flashing in Camden tonight because this is a game of spot the band member as 'Latchmere' changes the room into the stage. Kids (by that we don't mean the old Melody Maker kind of urchins, we mean Streets fans with hoodies!) rub shoulders with the band and dance whilst taking their phone photos and videos as they sing along to indie anthem of the year so far...

Earlier, Les Incompetents stumble past the window. Like the Californian Raisins on a day out in the park. It’s a glorious shambles, their Color Bar crack, just off the beaten track, raucous and rabid. The view’s restricted, but the mess is audible: pop batterings and junior Beefhearts-isms on a sunny day. This is what the Libertines would sound like if they weren’t such grotty, dirrty stop out, powder pests.

Lethal Bizzle...in...da...house. Sort of. With a big indie DiSclaimer: This Is Not As Rap As It Looks. Plenty of finger pressing, turntable tricks and boys dancing around in their pyjamas with the hippity hop yelling included. But it’s got Crawl™ all over it as soon as the Bizzle bashes out The Rakes ‘22 Grand Job’. Taking the big dang catchy chorus and replacing all the unnecessary indie verses with wry threats, clever mathematics and urban mutter, makes all the flaming posturing and post-Kriss Kross mannerisms worth the hassle.

Talking of houses, there's a full one at the Underworld. 65daysofstatic's glitch-filled, electronic post-rock has the room, the bar and street packed out. We stand outside and listen to drunk Irish men telling jokes...

65dos tinkling piano tugs on these heartstrings more than a shift in key and a bunch of tacked-on violins ever could. Along with The Bizzle and Sway, they are probably the least likely band on the average and unsurprising 'bill' but there are no cries for vocals.

"Three Irish men arrive at the gates of Heaven and St. Peter checks his books and says, 'My God, the book says you're all in the IRA. You cant come in to heaven.' The men say, 'We don’t want to come in. You’ve got 10 minutes to get out.'"

But it soon becomes tiresome. As does seeing shit bands. While Rumble Strips were "brilliant, and everyone loved them", The Mitchell Brothers apparently pulled "the smallest ever crowd" and the best thing anyone could think to say about Switches was that they couldn't think of anything to say.

While Gaz and his travelling Supergrass circus occupy the majority of Crawlers, we stand and wait. We stand and wait for Boy Kill Boy... but...they take forever to sing nothing...