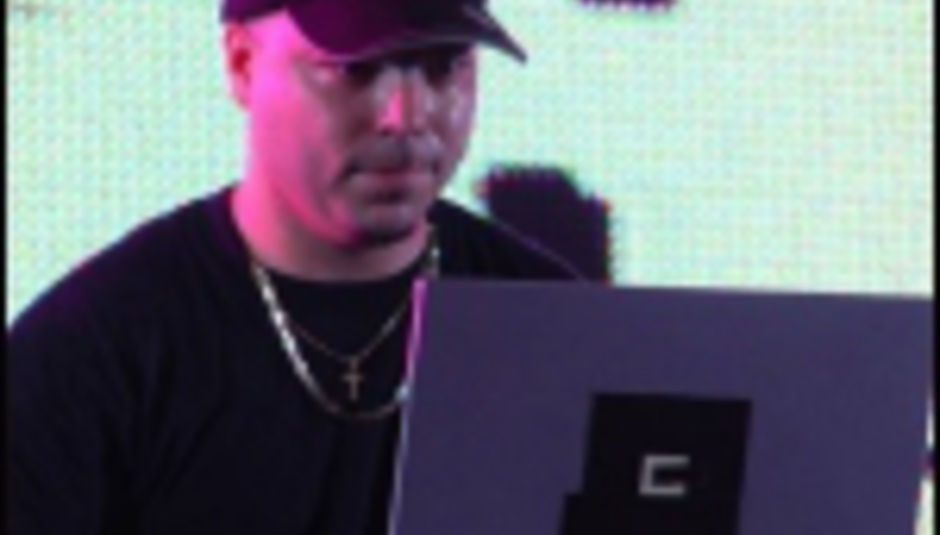 Grooving their slippery butts off in a vacuum sealed bleeping sweatshop of doom heaven in pill-fuelled excess were:

DEATH IN VEGAS:
It's the end of the summer, and you're in the dance tent, and it's hot as fuck, and at least 60% of the people in here are pissed/stoned/floating on a magical pink cloud in happyhighland and clutching glowsticks, and there are big globulous glowing blue cubes dangling in mid-air, and Death In Vegas are waging war upon your senses and giving it their creepy sexy hypnotic freak-you-the-fuck-out all. So why is no-one dancing? They're all standing around like bored middle-aged morons. Fucking spoilsports - Gen
Too tired to pass judgement. Sorry. JS
BLACKALICOUS:
Were there really polythene sheets hanging down the entrances preventing ANY ventilation or was I just seeing things? - RaZ
DM & JEMINI:
Ah, yeah! RaZ
AMON TOBIN:
Although I'd been looking forward to this for a while his fractured beats and dizzying drum 'n' bass anomalies just seemed wrong in the middle of the afternoon - Mat
BUCK 65:
Marred by inadequate sound and unfortunately placed before the Smirnoff dance picture-show screen, those honky-tonk blues just couldn’t stir the already distracted crowd. Ho hum, you win some, you lose some. JS
MY COMPUTER:
Not a single DiS writer frequented the Carling Stage at the time of My Porn Reservoir's set. Tells a story in itself.

2 MANY DJS:
So I left Blur positively bored out of my mind and contemplating bed when, allofasudden, I stumbled across a rave. Not just any rave, the best rave imaginable with bits of Beyonce, Dolly Parton, House of Pain, Guns 'n' Roses... everything. And so I raved and it got me in the right frame of mind for the rest of the night. All hail 2 MANY DJS! - KP
AUDIO BULLYS:
I went, I saw, I danced and I left; impressed. KP
GOLD CHAINS: Lots of shouting. Time for a delicious Carling I believe. GT
Best band of the tent. Ok, the only guys I saw all weekend, and even tho GC didn't play some of his killer tracks, instead going more 80s and dropping in a few too many slow numbers, him and his polio dancing petite partner in crime made the best of a slightly ill advised tracklisting. Face it, the dance tent's a joke, do you get an indie tent at a dance festival? No, the crowd response says why. Ollie

LAMB
Overheard 'Angels' during a break in Metallica's set and it sounded lusciously spellbinding - Mat
SQUAREPUSHER:
Put it this way - complicated quadratics at 10pm on the Sunday of a drunken festival weekend would be hard to get your head round. Squarepusher sounds like 4n/6fx(2(n-7)) ..with more swearing... and so many more drugs. Ed
JUST JACK:
Imagine my delight when, stumbling in half asleep, slightly hungover and blinded by the mid-afternoon sun, I sank to the ground only to be soothed and mesmerised by Just Jack's laidback hip-hop grooves. Just what the doctor ordered - Gen
BLAK TWANG:
It was too damn sweaty to watch anything in here - RaZ