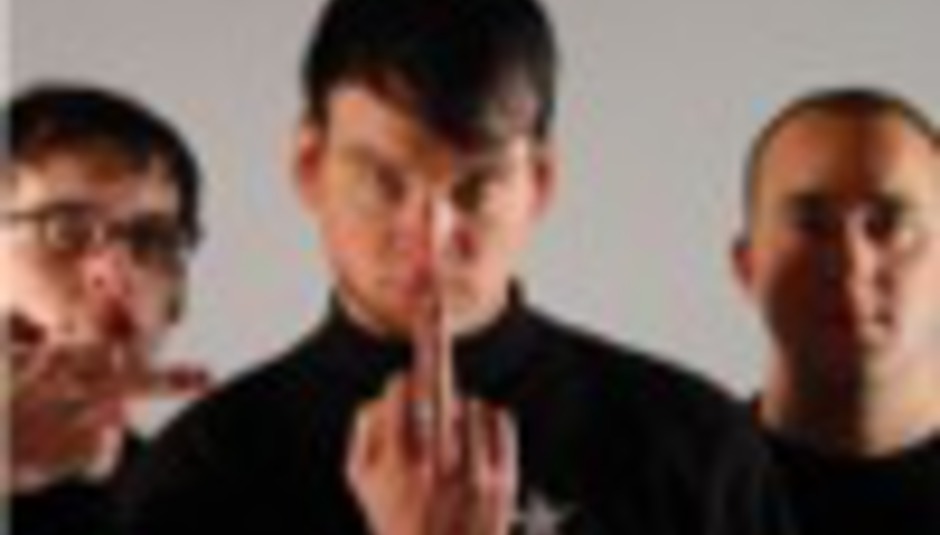 by Raziq Rauf July 4th, 2003
Chicagoan emo-pop-punk-rock Alkaline Trio’s new album ‘Good Mourning’ is the “record Topshop will be playing the day the planes crash into their flagship store” and worryingly, they have been said to closely resemble dead rock stars. Today I was indulged - I was presented with Alkaline Trio in their entirety. Yeah, all three of them. My only instructions were to let the drummer play too. You know I was never going to be that rude! Right?

I entered the penthouse suite to the sight of the band slouched on a sofa - clearly ready for a day wasted on interviews on a machine designed to either sell their records or ruin their careers. Three young black-clad men sprawl their souls across five inches of plastic disc, and more frequently a stage. Right now the dead rock stars thing was ringing true. The newest arrival to the fold is the band’s third drummer, Derek Grant. When quizzed upon the band’s apparent leaning toward death he thought that, “it’s something that’s inevitable and I think it’s more interesting than flowers… but I put flowers all over the new record… better than running around in the grass with tulips or something, anyway. Gothic imagery has always been something I’ve been attracted to personally.”

The darker side to the Alkaline Trio has always been the thrilling factor of their sound. While they may retain the catchy hooks so widely associated with punk bands, the retention of a twist has always added a bit more depth to the songs. Bassist and co-vocalist, Dan Andriano reasons that they prefer to, “keep it simple and catchy and focus more on vocal melody to keep the interest on lyrics rather than really intricate song structures. We suck you in and corrupt you!” Derek pipes up soon after adding, “Not that I write any of the music but we’re all into bands like The Misfits and The Damned - bands who successfully merged a darker, horror subject matter with very catchy, poppy songs.” That’s right, drummer boy, you don’t write any of the bloody songs so shut it. Oops.

An aspect of the music that undoubtedly strikes a concord with many of their fans is the very, very personal direction the songs come from. With seemingly every song citing loneliness and heartbreak, it is very easy to empathise your own experiences with theirs. This feature coupled with the perverted poetry makes reading the lyrics an interesting experience facing shaking dog’s shitting razorblades, watching flies fuck on New Year’s Eve, having your fingers being cut off and the torrents of emotional torments surging through so many of their songs.

Guitarist and co-vocalist, Matt Skiba explains where his delightfully deformed doggerel comes from, “I would say the lyrics came from personal experience but to just spell something out to somebody isn’t very interesting. The songs are very personal, but they’re also not very literal. People assume they’re about girls because they involve leaving and loneliness, but that happens when a friend passes away or when one of your best friends isn’t one of your best friends any more - even if they’re still walking the earth. People tend to assume they are about girls because everybody else that writes pop structured punk music sing about girls a lot of the time.”

Alkaline Trio on School
Matt: “School is for dummies. Drop out. Kill yourself. No, not really! School is great for the people who can get something out of it. I finished high school and did a couple of years at an art school in Chicago. Dan finished high school and did an hour of college.”
Dan: “School’s good. Not high school and elementary school where they just say what you’re gonna learn. But when you get to choose what you want to learn and explore the things you want to, that’s amazing. Unfortunately it’s really expensive and if you want to go to a good college you have to be really rich or play football or something. Other than that it’s a great thing.”

Alkaline Trio on Religion
Dan: “None of us are religious. Organised religion is a joke. There is no spirituality. If you really want to be a good person that’s one thing but giving your money to the Catholic Church?! It is basically just a business in the name of the Lord. With all the hateful things that they support it’s just so hypocritical and I don’t understand how it’s been around to become one of the most powerful forces on the planet. It’s amazing, but not in a good way.”

In recent times Alkaline Trio have come under harsh criticism from their own fans for becoming ‘sellouts’. Having worked hard for five years with very little recognition, they signed to notorious punk label Vagrant Records and released their outstanding 2001 album ‘From Here to Infirmary’. They soon headed out on tour with Blink 182 on a national arena tour of the US. This act of seeming commercialisation led to the damning condemnation but Matt disagrees with this mentality, “I think selling out is just not being honest with yourself. I personally couldn’t call anybody a sellout, but it’s if somebody is sacrificing their own personal integrity for whatever reason - it could be on any level, not just music. It’s just people being dishonest with people - to others and most importantly being dishonest with themselves.”

Now on their fourth visit over here with a Reading Festival appearance and a full UK tour still to come in 2003, Alkaline Trio are soaking up the culture faster than ever as Matt recounts, “I bought a Man United scarf yesterday. I had the choice of having Beckham on it, or not. Mine doesn’t have it on it.” Good job too, as the absurdly-haired nonce has happily defected from his scum-sucking Manchester home to the Real Madrid All-Stars. I mean, why wear a ponytail if it looks shit? “I don’t really know anything about him. I know he was on the Ali G show once where his girlfriend was made fun of. I admired his control of his temper.” The saronged fool just didn’t understand what was going on!

Why do none of you have beards?
Derek: I don’t know if any of us can actually grow beards…
Matt: A beard is a girl that’s a front for a gay man…
Dan: None of us are closet homosexuals are we? I can’t even grow a beard as a 26 year old man.

What is your favourite cheese?
Derek: Soy cheese.
Dan: That ain’t really cheese.

Who would win in a fight between the Grateful Dead and The Undead with Burning Spears?
Matt: The Undead… you mean the band? And The Burning Spears… you mean the band?
DiS: Deconstructing the question is against the rules.
Derek: I’m sure as long as there’s money to be made, The Grateful Dead will never stop. I think they’d win in any case.
Dan: Dude! It’s the undead… zombies!

Alkaline Trio play the London Camden Barfly on Saturday 5th July in support of their new single ‘We’ve Had Enough’. Then they'll be back in the autumn to rock socks off galore.