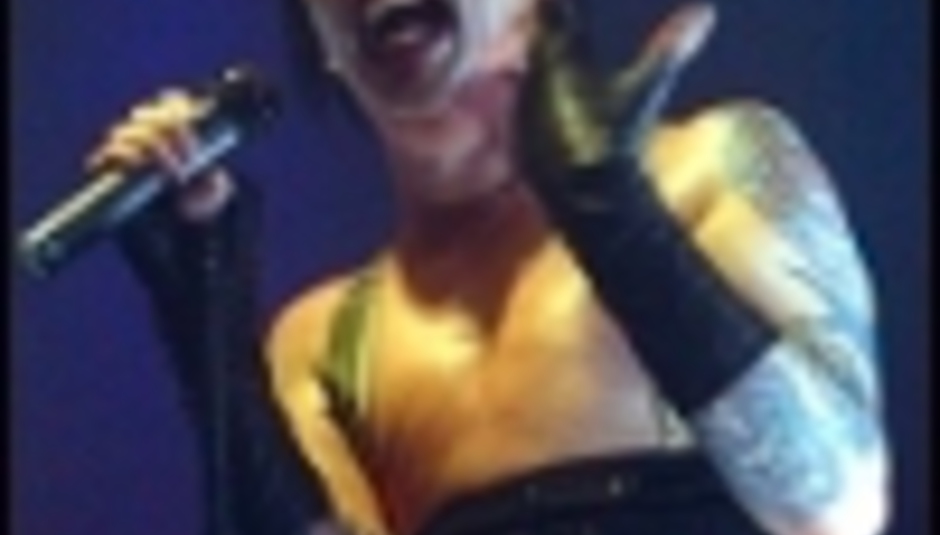 by Kate Price June 18th, 2003
Forget your prejudices and stereotypes of angsty teenaged rock kids and get off your muso high horse for just one minute. This isn’t about being in an elitist scene where music has to be arty and audiences have to consist of 50 people max, each with three A Levels and, naturally, a detailed knowledge of influencing music pre-1990 (what do you mean you’ve never heard of Lester Bangs?!). This is about being entertained, about art and performance and about professionalism and inspiration.

You there, yes you with the Bright Eyes CD playing and the desk littered with issues of Careless Talk and copies of Julian Cope novels, you can sit there and tell me that Marilyn Manson is a fake. A money grabbing piss-taker, making the most of teenaged hormones to grab at this weeks pocket money. Well FUCK YOU. In your tiny little world of artist biographies, music documentaries and empty toilet venues, I wonder, have you forgotten what it is to actually be entertained? To watch something purely because you enjoy it – because it’s exciting, fun and just the tiniest bit risqué in the most beautifully cliché way?

Of course Marilyn Manson is an actor, a fictional creation, a fantasy, but are you gonna go to the West End and heckle the cast of Cats because they’re not genuinely feline furballs? Or do you dismiss the works of Shakespeare because fairies don’t exist and the whole of A Midsummer Night’s Dream was a lie? Or do you accept them as artistic interpretations? As beautiful stories that inspire the imagination and entertain their audiences? – professional, creative and beautifully inventive. Now I ask those of you who have actually seen Marilyn Manson live, how is his performance any different?

In his own perfectly unique way (true his stereotype fans choose to adopt the same toned-down, digestible uniform, but the man himself is truly unconventional) MM combines some of the best pop tunes, most skilful and insightful arrangements and downright professional theatre performances the world has ever seen. This is not the Spice Girls wiggling their arses to a dance routine made up by some woman who was too ugly to ever be a pop star herself, nor is it Westlife sitting rigidly on stools pulling some of the most putrid, cheesy facial expressions known to man - this is true performance. It’s fresh, it’s out of the ordinary and it’s just the slightest bit dangerous, yet ultimately so cleverly done and so artistic that even the most observant of critics would have a hard time finding fault. You sit there, with your retro garage punk faux-fuck-you-integrity avec mullety haircuts SHITE and tell me this is fake. Tell me you’re bored, tell me you’re stuck for a tune to sing along to and tell me you’re not amused or even vaguely interested by the women in suspenders grinding on top of the piano.

I’m sick of hearing people moan on about how many crimes he has induced, how he’s corrupting the youth of today and how he’s the fucking Anti-Christ. Marilyn Manson is no more to blame for the Columbine shootings than the stars of whatever horror films those kids inevitably watched in the weeks leading up to the incident or any other piece of media featuring violence around at the time. The man isn’t evil, he’s just a performer provoking controversy and playing up to the publics reactions. And let’s face it, in interview he’s about a million times more interesting and intelligent than, say, The Sex Pistols ever were. And to the fucknut standing in front of me during Mansons’ set at Download… Well, you really just proved why the average fourteen-year-old Marilyn Manson fan has a million times more about them, more of an open mind and is generally twenty times more interesting than the average aging Iron Maiden fan.

Look objectively, stop trying to be all cool and elusive, forget the pretension and see what all the teenage glitter goths of our society have got goin’ on. You won’t be disappointed - I promise.