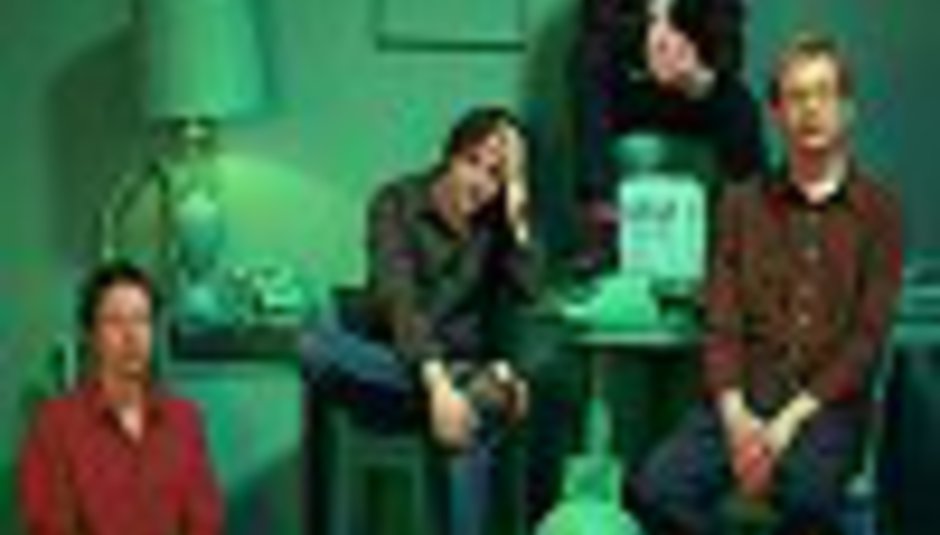 Originally formed as a duo - songwriting geniuses Chris Collingwood and Adam Schlesinger - New York-based Fountains of Wayne were born unto the world in 1996, producing a self-titled debut album created in a drunken haze and recorded over a period of five days. The unfamiliar will normally show a nod of recognition when you mention radio hits 'Sink To The Bottom' and (the mighty) 'Radiation Vibe', plus the often-mentioned (and here it is again) fact that Adam was nominated for Oscar and Golden Globe awards for penning the cutesy theme tune to the Tom Hanks movie 'That Thing You Do'.

But much has happened since then. Second album, 'Utopia Parkway' (1999) fared well critically but not commercially, and the band found themselves dropped by Atlantic Records. Boo! So where the hell have they been, eh? DiS phoned bassist/vocalist and all-round nice bloke Adam to find out what's goin' down.

"We decided that rather than making demos for people, which we find particularly demeaning, we'd go and make a record on our own, then figure out a way to release it when it's done. Which is what we did," explains Adam, rather matter-of-factly. The record he's talking about is the long-awaited 'Welcome Interstate Managers', which is out now in America and Japan on S-Curve/Virgin. The album is typical Fountains of Wayne. A massive 16-tracks in length, it loses none of the powerpop elements they're famous for. Face it, the chances of them doing a 'Kid A' on our asses are as slim as reading a bad review of this album. But amongst much of 'Welcome's chirpy exterior lies a far more melancholic side to the band. Within five seconds of the opening verse of track one, they've already killed a man by a "cellular phone explosion", and within minutes an airplane pilot has been sacked for reading 'High Times' in the cockpit. Some of the familiar characters from FoW's past songs like 'Sick Day' and 'She's Got A Problem' resurface under different guises. Indeed, the lives of the people in the album's stories are highly, for want of a better phrase, fucked up.

How much of this is story-telling and how much is your personal experiences? "It's always a combination of both," Adam says. "A lot of it is fictional but you can't help but have your own experiences seep in there, whether it's the setting of a certain song or there are characters in there who remind you of someone you actually knew. Some of the stuff is very directly taken from our own lives, especially some of the songs which Chris [singer/guitarist] wrote, like 'Valley Winter Song' which is about himself in the winter [Chris told one magazine that he likes to "hibernate"], and 'Bought for a Song' which is about touring. But a lot of them are just… nonsense."

Unlike the wave of trendy New York bands who followed them (I need name no names), Fountains Of Wayne mainly take inspiration from classic English bands. Amongst the witty Ray Davies-style observations of human life lie more whimsical moods like 'Hackensack' (a song written a good three years ago) and straight-up and quite brilliant country tune 'Hung Up On You'. "That's one of Chris' songs. Actually it's a really old song. He likes country music, especially the Gram Parsons type, urban country or whatever you want to call it. With this record we were trying to make something as diverse as we could be. We wanted to have all kinds of different songs on there, instead of straight-ahead pop-rock, we thought it would be kinda fun to do something different."

Indeed the album is different from their previous two. It's arguably their best yet. In 'Mexican Wine' they have a new 'Radiation Vibe'. Then there's first single 'Stacy's Mom', lyrically lying between 'American Pie' and 'The Graduate' in nature. The video's MILF is model Rachel Hunter. "She was a very good sport about it," says Adam, "the video shoot was great. It was a blast. I'm actually waiting for the first edit of the video to be sent down here today - I haven't actually seen it yet. We're excited about it." The song is currently doing the rounds on American airwaves but won't be released in the UK till September, either just before or after the new album comes out here too. Then there will be a tour...

Ah, touring. A popular lyrical subject for bands (see previously-mentioned 'Bought For A Song', and Supergrass' 'Movin'). They toured 'Utopia Parkway' for a year but approach things differently now. "We really like to play and we're looking forward to playing again because it's been a while. Touring is gruelling if you do it for months on end. We've got a bit better at controlling our schedules so we don't burn ourselves out. We're gonna come over to the UK when the record's out there."
Well, we love the album and want to see you. Just so you know, you are wanted here.
"Oh good, we won't be turned away at the border then?"
Um, no.

In the apparent four-year hiatus between albums, they contributed songs to an animated series on VH1. But what's happened to that? "We don't really know… They keep telling us it's going to be on the air sometime this year. It's actually on air in Canada just now. So we don't really know the status of that show. But the one thing that's great about it is working on that show helped to finance our record. At the time we were paying for everything out of our pockets."

Getting dropped by their label certainly wasn't seen as the be all and end all, unlike most bands who suffer as a result. FoW licked their wounds and got on with album number three. But Adam doesn't seem too pissed off at Atlantic for what happened. "We never had a bad relationship with Atlantic. Actually we have a lot of friends there. Compared to how a lot of other bands are treated, we were treated pretty decently. We were able to tour, make videos and put out multiple singles and so on. We don't look back on that period as a dark period in our lives. We're excited that S-Curve are excited, and they see the band as having a lot of potential. We're happy to be with them."

FoW don't appear to have suffered many setbacks over the years. You could say low points would be 'That Thing You Do' threatening to overshadow what the band were doing at the time; then there was their cover of Ms Spears' 'Baby One More Time', which was recorded as a potential B-side for the single 'Red Dragon Tattoo'. After the master copy of the recording was snuck out of the studio, radio DJ Howard Stern began playing it only for other DJs to follow suit. A few eyebrows were raised by the Atlantic bigwigs, who wanted it released as a single in its own right. As the band didn't want a "dumb novelty hit", they pulled it from the single and it's never been commercially released.

But what the biggest pisser about FoW is that they aren't more popular than they are. Pick any track at random from their recorded output thus far and chances are it'll have "potential hit single" written all over it. The problem is, powerpop is NOT COOL. Unlike fellow bubblegum guitar abusers Weezer, they don't have a weirdo fuckup of a frontman (I mean that in the nicest possible way). They're not a young bunch of floppy-haired models in leather jackets, they're a group of 30-somethings who like '60s pop and '70s rock radio. FoW just do that thing they do (if you pardon the pun) without falling into any scenes. They're in New York. That's cool isn't it? "Nah, we're not part of a scene," he sighs. "I think the press is the same as always and is just interested in the newest and latest thing. I suppose we're from the last wave [of NYC bands]! That's always typical of the UK press anyway, every few years they get excited about New York again."
What new bands do you rate? I was supposed to interview OK Go today but cancelled it 'cos I got to speak to you instead…
"I'm sorry for ruining that for them, then! OK Go are great. We did a month of touring with them. I think there's a lot of good bands around just now. It seems to be a good period, much better than it was three or four years ago."
And you're still involved with running Scratchie Records. How's that going?
"We seem to have got a new lease of life lately. We just put out a record by a Swedish group called The Sounds, who are doing really well here in the US. We've got a couple of other things lined up for later this year. It's a small operation but we're still going…"

Surely throughout three Fountains Of Wayne albums, there must be some regrets? Unlikely - FoW's debut easily ranks one of the greatest debut albums of all time, despite being recorded in days whilst drunk ("we couldn't do that again even if we wanted to and tried to!"). "I must say that I'm happy with all of them," he says. "They all kinda represent different periods in our lives and each one has a different vibe. I'm happy to say that we haven't put out anything I'm ashamed of yet, heh heh."
This is in reference to 'Leave The Biker': and we want to know which branch of the Hell's Angels stole your bird? They sound cool.
"Ha ha ha ha ha ha ha! That's one of those songs that was written very early on by Chris, in a drunken haze, so that's where the inspiration of that came from!"
The moral of this is that drunken hazes can obviously create good music, kiddies, so make sure you try it sometime if you're in a band. Or even if you're not.
Adam, we also wish to know why you want an alien for Christmas and not a Playstation 2?
"Heh heh… I think that's a rhetorical question."
Indeed. OK, on that note, I believe I'm done.
"Thanks so much for doing this. And we'll see you in September."

If you can't wait that long for the album, there's always mail order. You know what you have to do.