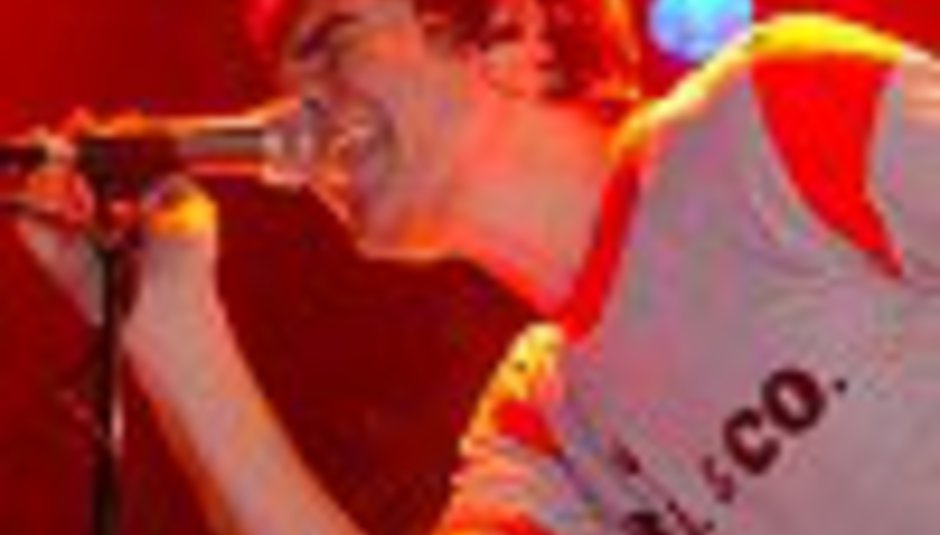 Oh hello there. Here is what's coming up courtesy of DiS in London this month.

** OUR LADY OF MIRACLES
Rockin female-fronted three-piece. Celebrating the release of their new single. "Melodically Post-Apocalyptic ThrashNoisePop" is what they call themselves, and who are we to argue?
ON AT 10.30pm
website

** THE SUFFRAJETS
Returning to the live scene after a slight change of line-up, the north London band cite Nirvana, Patti Smith, The Breeders among their influences. "BIG riffs, raw-as-skin-scraped-on-sandpaper vocals, tribal Babes In Toyland-esque drums and tunes you can take your clothes off and DIVE into!"
ON AT 9:45pm
DiS profile

** THE SCARAMANGA SIX
This Leeds-based band are set to make a welcome return to London to do some recording, so they thought "why not play a gig too?" and since DiS gave their last album 4/5, here they are. They're garage rock but with a distinctly English edge. 'Soulful and subtle, yet also adventurous and abrasive, The Scaramanga Six possess all the makings of a classic band" - Kerrang!
ON AT 9pm
website

An evening of mid-summer marvellousnessnessness.

** CLOSER are a popcore trio not unlike Weezer with a bit of Trail Of Dead thrown in. An appearance on Scottish compilation 'Rock Mess Monsters' upped their profile which has been growing since slots at Glasgow Gig on The Green festival 2 years running, and supports with Sparta, Nada Surf and the Coopers.
CLOSER ARE ONSTAGE AT 10.45PM
website

** 50 HERTZ return to Club Fandango to launch their new single, 'In The Town'. Expect searing guitars and soaring melodies. "Genius," says The Fly. "A singer who invokes the spirit of Brett Anderson in '96, this four piece appear to have all the tunes and all the moves," says drownedinsound.
50 HERTZ ARE ONSTAGE AT 10:00PM
website

** THE BOXER REBELLION are a geographically eclectic four-piece from the western world who make giant, epic rock. Think Verve, think Coldplay, think swirling guitar rock, lush piano laments and a band fronted by one heck of a... well, frontman. It's A&R frothage time.
THE BOXER REBELLION ARE ONSTAGE AT 9:15PM
website

**THE GREAT SHARK HUNT are four 20-year-old Hunter S. Thompson fans from London and cite influences such as Six By Seven, Sigur Ros and Muse. Amazingly, they actually manage to sound like a cross between all three. "The bizarrely titled 'An Argument Breaks Out In Furniture Village' flourishes with understated brilliance," reckon OneMusic.
THE GREAT SHARK HUNT ARE ONSTAGE AT 8.30PM
website

** JARCREW
Ammanford, Wales is their home and Kerrang celebrated their arrival as being "all your prayers answered". Since releasing debut album 'Breakdance Euphoria Kids' last July, and appearing on Fierce Panda's 'Squirrel EP', the band have signed to Gut Records. They've been touring with Mclusky and Span and there's little else to say here other than they rock, as you'll be hearing plenty about them in the future...
ON AT 10.30pm
website

** BERKELEY
Irish trio, whose excellent debut album 'Hope Prayers & Bubblegum' was produced by none other than Steve Albini (The Pixies, Nirvana, The Breeders) and was released in March to glowing reviews. "Near perfect debut... is both a contorted, complex reworking of post-hardcore rock and a raw, bloodied, ear busting slab of emotion." - Kerrang (4/5)
ON AT 9.45pm
website

** ALYSSA'S WISH
After gigging round Scotland supporting the likes of thisGIRL, Capdown, Tribute To Nothing and Reuben, this Aberdeen trio thought it time to make their first trip to London village. Under their previous name, they even played to thousands of people in Belarus in the Former Soviet Union, which saw them having to be escorted by the army for their own protection... They cite Glassjaw, Thursday and At The Drive-In as influences.
ON AT 9pm
website