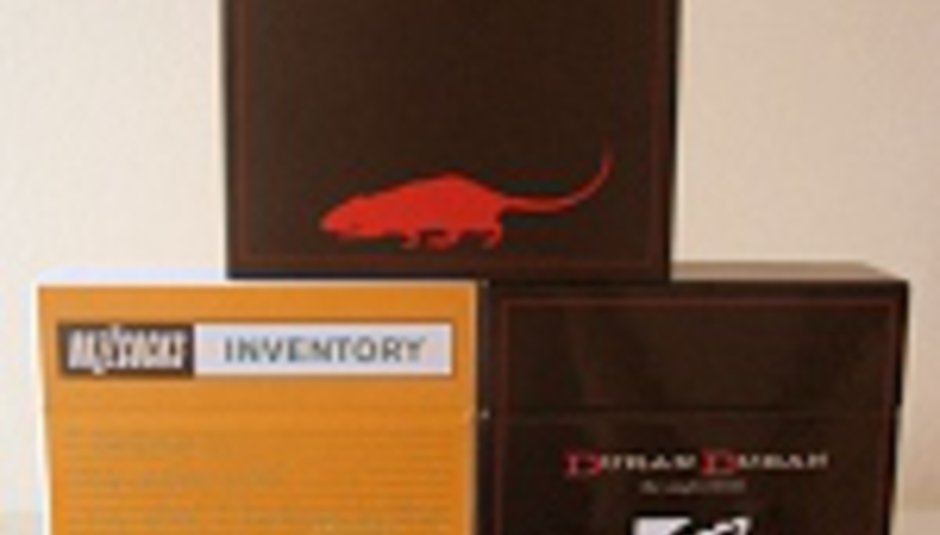 EMI Catalogue have been busy bees trying to find new ways of making you replace any old vinyl you might still have, and even replace old CDs. Well here's the latest.

Shiny new handbag-sized singles collections, housing music in faithfully-replicated sleeves and one or two previously 'lost' rarities. Sound good? Let's have a look at three which came out on the same day - May 12th 2003. They all retail for around £25, and they are by Buzzcocks, Duran Duran and The Stranglers. BUZZCOCKS - 'Inventory' contains the singles from 1977-1981. Everyone loves (the) Buzzcocks. Even your mum. Even snotty punks loved (the) Buzzcocks, despite the 'Cocks displaying the most pop suss in their generation of guitar-slinging miscreants. You can even insert a "Never Mind The Buzzcocks" joke here if you wish.

But oh lordy lordy gracious me if Buzzcocks weren't one of the greatest SINGLES bands of all time. This should naturally give them the edge, what with this being a SINGLES collection, but hang on a minute - haven't we seen all this before on the (now budget price) 'Singles Going Steady' compilation? Yes. Sadly, there is little on 'Inventory' the average or even casual fan won't already have. The only major points of interest are; former NME covertape track 'I Look Alone', which isn't as strong as much of the other tracks but has a whimsical "everything's beautiful" chorus and, best of all, handclaps; some very classy artwork.

Timescale: From 'Spiral Scratch EP' to 'What Do You Know?'
Verdict: Unbeatable collection of songs but already widely available. One for serious collectors only. DURAN DURAN - 'The Singles 81-85' is a collection of Duran Duran singles from, erm, 1981 to 1985. Not everybody loves Duran Duran. Your mum probably does. Quite frankly a lot of people would like to give them all a good smack in the mouth. But here we have another classic singles band. Sadly, most of the B-sides are shit and extended mixes in the 1980s usually consisted of some extra drums and a bit of pointless bass, not the big behemoth Fatboy Slim beat-a-thon mixes the '90s started spawning. So… not a great deal of interest but the fans are going to lap this up anyway. Minus points for the artwork looking slightly fuzzy as it's been squashed down to CD size. Also slightly minor loss for the glossy black cover, which means you'll get your grubby fingerprints all over it. Boo! Plus points for the sheer number of tracks here (40). DiS recently spotted one radio plugger clutching this box set to his chest, showing it off to all and sundry in the Dublin Castle.

Timescale: From 'Planet Earth' to 'A View To A Kill'
Verdict: Released at precisely the right time for pop kids wanting to explore the past, when boybands wrote and played their own songs. Will mostly be bought by Americans, probably. THE STRANGLERS - 'The UA Singles 79-82' in which manky old men play self-indulgent rock outs. NOT PUNK. Not even all that good. BUT this is the most interesting out of the three boxes, as it doesn't regurgitate numerous compilations already onsale. Your dad probably likes them. (And they've probably shagged your mum.) A few live tracks and 12" mixes are on some singles, such as 'Bear Cage'/'Sha Sha Go'. The yawnsome 'Don't Bring Harry' has 'Crabs' and 'In The Shadows' live. There is no sign of 'Peaches' anywhere but thank god for that 'cos that song irritates the tits (peaches) off me. Elsewhere, the likeable 'Golden Brown' rears its head, not that it needs to as there's as much point in that as there is New Order releasing 'Blue Monday' again. Most interesting for fans is the inclusion of two foreign tracks, in Swedish and French… the idea of this doesn't particularly turn me on but I'm sure it will for someone else.

Timescale: From 'Nuclear Device' to 'N'emmenes Pas Harry' (French version of the single 'Don't Bring Harry')
Verdict: Personally not a fan but a diverse collection all the same.