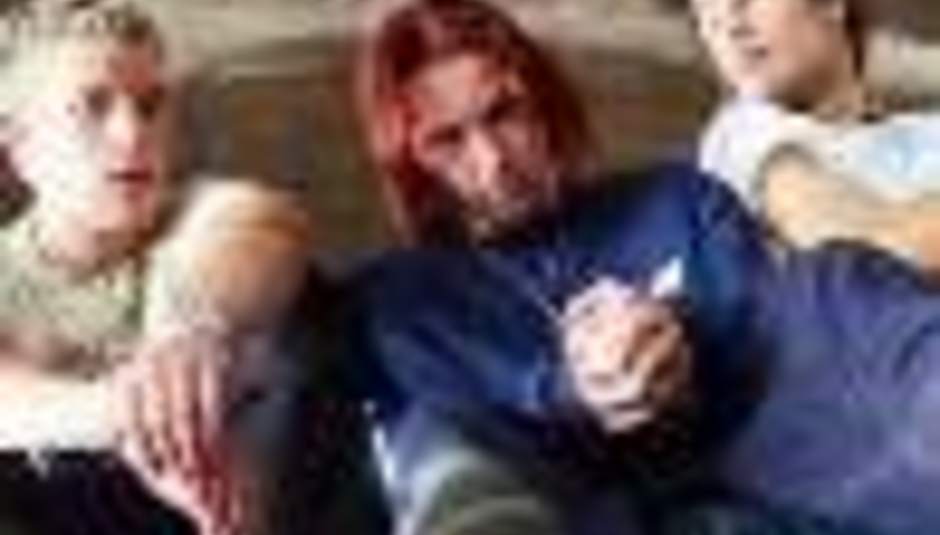 This is InMe’s tour diary from their headline tour in January 2003. It has been transcribed straight from its original handwritten form with only a couple of spelling mistakes corrected (Dave spelt champers, ‘shampers’ – bless him - Ed). It seems that a day in the life of InMe on tour revolves around a lot of sleeping, drinking, eating and ‘chilling’. Read on to discover chair trumpets, Dave listing everything he ate, Joe’s run in with an older woman and shop security and count the amount of times each band member says ‘chilling’ or ‘chilled’…

Hey there! Today was a pretty damn cool day to the start the tour off with. We arrived at the tour bus and set up our bunks – pretty teeny tiny bunks but the rest of the bus is awesome. We have two lounges this time, one upstairs and one downstairs. It also has cool framed oriental pictures and warm toned lamps so it’s quite homely. The toilet is a bit bigger too! There is also a cool are at the front of the bus upstairs which we have named The Suicide Lounge (don’t quite know why) where you can jam out on guitar without annoying everyone else.

This is the third time we have played the Forum so we know what to expect – a lot of sweat! This venue used to be a public toilet (seriously!) but it seems like a cool place for people to check out plans. Crackout seem like nice chaps and they are with us for the first four dates. We didn’t catch their set though, because we had a meal. We ate at a Mediterranean restaurant with John (our manager), Neil (our tour manager) and Keane (our merch dude). I had some crazy salad which was delish and spaghetti with clams and tomatoes. Nice!

Anyway, pretty soon we hit the stage and started rocking out. The crowd were awesome and seemed to be giving it their all and it very sweaty very quickly! The new set worked out pretty cool but it’ll be even better when we get our lighting guy (Abiss) on board tomorrow. The heat brought us close to exhaustion but we still loved it and survived – bring on the next show! We had a comedown phase after the show and met some fans and friends which was cool. Then I headed back to the bus and got on me jammies (they keep me warm O.K?) and me slob vest and had a wash. Chilled out with some friends for a while and watched some dude’s ‘Jackass’ video, which was funny and then I retired. Over and out…

So, I went into Mark’s and Spencer’s this morning and I’m at the till when the cashier starts to look at me funny. I dismissed it as just a weird old checkout woman until she started to bat her eyelids – too much!!!

I grab my clementine juice (not orange!) and run as quickly as possible but when I get to the door the alarm goes off! How the fuck do you alarm a carton of juice? Where? These shops are evil I swear, or maybe it’s just Stoke? More crap later.

The show in Stoke was awesome, the crowd were great and the vibe was rockin’. Over and out,

Dave (under some kind of influence) x

Today the crew got to chill out and relax except Adam (guitar tech) who made Joe a cool pedal board. I had to do some vocal and guitar tracking then I watched T.V. and listened to the new Opeth album – ‘Damnation’. Very mellow. Eventually I hit the hay. Days off are good for resting but they can be pretty dull without a show. Zzzzz

I didn’t sleep too well again but me, Adam and Keane had a Scottish breakfast and a beer (Guinness) at a bar called ‘Filthy McNasty’s’. Good food. Certain members of the crew seem to have become addicted to ‘Halo’ on the X-BOX. My interesting thoughts so far have led me to purchase Iron Maiden – ‘Power Slave’. Talk Talk – ‘Best Of’ and Cyclefly – ‘Crave’ all for fifteen quid – nice! Must…buy…more…CDs. Would be nice to find a shower…

Today was one of those days where every minute seems like an hour so I spent most of it chilling and smoking to get into a good vibe for the evening. Went out for dinner but I was far too stoned, then came back and played show to the same wicked Edinburgh fans and shit. Managed to beat Dave up a little on stage which brightens up the day no end.

Found out that our ‘Crushed Like Fruit’ review from your site involved the reviewer letting some puberty issues out – glad to help!

The day started off with Dave and I realising that we have no sense of direction – we completely missed the main town and instead found some crap high street. The venue was cool but we had to wait on the bus because the venue was shut so most of today was the same as yesterday – chilling out and playing on the computer.

The show went down really well apart from the fact that someone had messed with our equipment but no real probs. The crowd were as crazy as ever. After the show we met a few of the people from the gig and then walked around for about 20 minutes in the rain to fond out the Vodka bar was shut! So we ended up back on the bus with a few drinks, well, one drink because Keane, our merch guy, drank the whole rider!

Anyway, you’ll hear from me soon,

Woke up and had myself a temperamental shower (boiling or freezing), but it’s good to be clean! Then I went to one of my favourite bars ‘Nice and Sleazy’ and had a meal and a pint of Guinness. Nice. I walked about a mile and a half to Fopp Records only to realise that I had forgotten my cash – bummer!

We sound checked and chilled out until the show. Checked out Crackout and really enjoyed what I saw. The show was cool tonight because the crowd were awesome and the past three Scottish dates have been really enjoyable. After the show I must have signed a hundred things!

We went back to ‘Nice and Sleazy’ before it shut and had a drink. There was also some chair trumpet playing (you blow down the legs and it sounds like a trumpet). We then went to the Garage as it becomes a dance club after the show. We had a wicked time rocking the dance floor and it seems that everyone else really enjoyed themselves too. Eventually, I retired. Ta ta!

Today was a day off so most of it was spent in bed nursing my poor head (hungover like a dehydrated camel). Had a nice meal and everyone got considerably drunk at an early time. Some great structures and buildings in Newcastle by the way. Later on we went to a cheap bar then on to a place called ‘Trillions’ which is a really nice rock bar. Met some dude (the DJ) called Bruce and he let us have loads of White Russians on the house. Lovely! We went on to a place called ‘Foundations’ (a cheesy dance club), and we danced the night away. I can’t remember much else but when we returned we tried to savage a street light with water filled bags.

We had a hotel today which I find pretty grim – bring back the tour bus! Double hangover tomorrow so I think I will take it easy tomorrow night. Over and out,

Woke up feeling a little bit rotten so I went and had some breakfast and lots of water. Did some press and stuff then decided to go back to rest. Woke up a little later and we went to ‘Frankie and Bennie’s’ restaurant for dinner. I had myself the Minestrone soup and then for my main course I had a black and blue burger (beef burger with melted stilton and Cajun spiced onion rings), it was good but I couldn’t eat it all. When I returned to the bus I decided to get even more sleep. Eventually it was time to hit the stage, the show was great fun and we got very sweaty. Biffy Clyro joined the tour today and they are an awesome band and great guys. Had an early one!

Hey, once again I woke up and the shower in the venue was the same as every shower on tour – crap. But today was a good day for some of us as we managed to get our clothes washed at last!!!

Anyway we’re back at Rock City – one of our favourite venues. It’s a great place with crazy people – the crowd are always really responsive. I spent a lot of time repairing my snare drum as I broke it last night. Soundcheck went well and we went to a pub for lunch and had a look at our album review in Kerrang!, we got 4 K’s! We spent a while chilling on the bus until showtime but I came in for a while to check out Biffy Clyro and they were as good as ever.

The show was great with a great crowd. A bracelet was thrown in my face during the show but never mind. After the show I saw some of my friends and family which was really cool. Had a few drinks and off to slumberville and boy, do I need it. Seeya soon, bysie bye,

Part 2 of the tour diary will be coming soon...