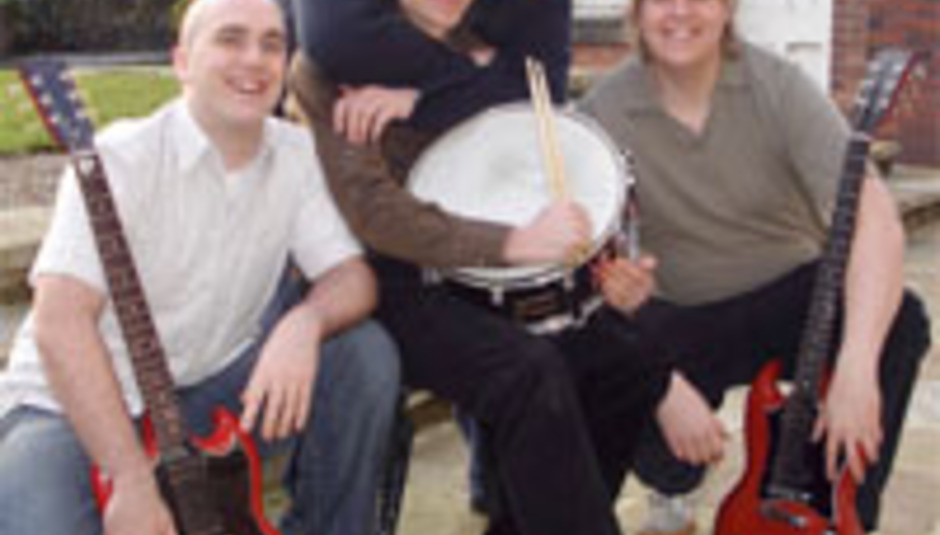 Itï¿½s a rare occurrence indeed when a completely unknown act leaves the unprepared critic ï¿½ there purely to play a few records between bands ï¿½ wholly overwhelmed and immediately in love with whatï¿½s rattling the venue in questionï¿½s PA. December 2005: Iï¿½m at a show in London, a bag of records and a few beers for company, when one of the supports strikes me, hard. I recall sending the founder of this site a text message, something along the lines of feeling an obsession coming on, one to rival the affection I felt for Youthmovie Soundtrack Strategies when I first experienced them in the flesh. I recall stepping out from behind the decks and into the open to see, up close and personally, what was unfolding on the venueï¿½s cramped stage: four men, one massive racket, no little wit and sparkling inventiveness.

Eiger sounded like Faith No More covering The Fall, like Sweep The Leg Johnny plundering Joeyfatï¿½s lyric sheet and delivering the surreal raps deadpan, like Converge fronted by a Yorkshire beat poet sucked from the 1940s into today against his will, like Isis playing at being a barbershop quartet. All at once and yet never, simultaneously and scattered; they shredded one second, danced their fingers across frets the next as if each digit wore a ballet shoe thimble. Shouted and screamed and confronted and spoke with potent coherency and smashed cymbals and brushed toms delicately and slapped bass and butchered guitars absolutely blue and black and red all over. They rocked as massively as their name suggests, and with a rich seam of lunacy. A flood of faint comparisons came easily, but, like the purest water from the freshest spring, not one stuck. Not one does, today, as their nine-track, double-disc, hand-made, self-released, self-titled (ish; it appears to be called e.) CD plays itself into a dizzied frenzy in my stereo. Select highlights: ï¿½Thank You For Calling The Eiger Compensation And Personal Injury Hotlineï¿½, ï¿½Avoiding People Is Becoming A Fulltime Jobï¿½.

Just as soon as youï¿½ve got one song pegged the best you can, the next unceremoniously pisses all over your assumptions and assertions. Itï¿½s not entirely unique ï¿½ what is? ï¿½ but it sure is genuinely challenging, engrossing and rewarding rock music, executed with complete precision. There can be no higher praise, surely, in these days of shameless mainstream plagiarism.

Eiger call Leeds home; they gig brilliantly but no so frequently (natives can see them at this yearï¿½s Chinchillafest, click here for details); they are Mathew Dixon aka Diamond Dicko, Jonathon Lowe, Matthew David Coy and Adam C*lv*rt; they are vocals and guitar, vocals and drums, vocals and bass, and vocals and guitar respectively. After a few months of sporadic e-mail contact, I finally adjusted my arse to the correct gear and fired off some DiScover questions, certain that you, too, would want to hear the last band ï¿½ the last totally unknown band ï¿½ to completely stop me in my tracks. What follows is the (almost) word-for-word response I received from Adam C*lv*rt (I may have re-worded the questions for clarity). Do enjoy, do take a selection of answers with a wee pinch, and then do check out Eigerï¿½s website, right here. Buy a CD, do, too; itï¿½s quite the special.

Hi Adam. Just how did the band come together, and how long ago? Were you in other bands prior to Eiger, and does anyone in the band play in any other acts, or indulge in any other artistic pursuits?
Thank you for your question Mike. Have you seen the cover of the first Boston album where it describes how everyone in that band met each other, and how they didnï¿½t realise that they both knew one of the others until something coincidental happened? It was nothing like that with us. I love that album. The Diamond and Matt have been in, or are still in, bands that you would have heard of. But itï¿½s not really relevant to what weï¿½re doing, more that I donï¿½t really move in the circles of many musicians so I had to approach people from other bands at gigs and set traps.

Youï¿½ve made it clear to me youï¿½re fans of Joeyfat ï¿½ would you say theyï¿½re a major influence on your music?
Thank you for your question Mike. Given how much you and I have discussed Joeyfat over e-mail I suppose my fondness for them has ended up being quite apparent. Joeyfat are one of the best bands Iï¿½m aware of ï¿½ their work is totally inspiring and different, and Eiger aspires to greatness in most of its many forms. We donï¿½t like ANY other bands.

Parallels have also been made with more post-rocking bands ï¿½ just how do you pitch yourselves, if you have to, for gig flyers or whatever?
Thank you for your question Mike. We donï¿½t describe ourselves and that seems to have encouraged people to describe us in their own words. Gig promoters can describe us however they wish if theyï¿½re going to the trouble of arranging a gig for us. The language employed on flyers and in reviews has been pleasingly varied, so it seems people approach the music with very much their own perspective. This is a good thing.
(You can read DiSï¿½s live review here.)

Have reviewers generally been fair towards you? I imagine many a writer hasnï¿½t experienced music too akin to what youï¿½re playing beforeï¿½
Thank you for your question Mike. The only reviews of us, live or recorded, have been initiated as a direct result of the fact that the reviewer is enthused about what weï¿½re doing and takes action independently of us (like this piece for instance). In that respect I suppose any review of us is pretty biased, or maybe people sense that if we got a bad review weï¿½d kick their heads in.
Itï¿½s very flattering of you to suggest weï¿½re doing something new or intriguing, as thatï¿½s certainly what weï¿½re aiming to do, but no doubt your readers will be the judges of that.

Have you ever had utterly dumbfounded faces staring back at you during a gig? Has anyone tried to shout above you, during the spoken-word parts of songs?
Thank you for your question Mike. We get a mixture of reactions from the audience, which seem to correspond to the shades of music at those points. Laughter, bemusement, shock, sex faces. At the gig in London at which you first saw us, there was quite a pretty lady stood near the front of the stage who seemed to find everything I said suggestive and kept pulling these Kenneth Williams-type expressions, without just cause I might add. Regardless of engaging diversions such as that, we always try hard to welcome the listeners and put them at ease, and every time we play itï¿½s really my wish that the audience very much enjoys the experience. That approach is also carried through into the recordings. Weï¿½re really not a cool band that scowls and turns their backs, even if some of the things weï¿½re playing require a little skill instrumentally and vocally. If people are listening then they deserve our best and although a lot of bands turn their backs to the people listening and mumble, I prefer to ask myself, ï¿½What would Judy do?ï¿½. You have a self-released CD, a double CD no less (pictured). Why split it across two discs? Have you pitched it to any labels?
Thank you for your question Mike. The songs are split across the two CDs for a variety of reasons, one of the more whimsical being that a gatefold sleeve feels nicer in your hand if thereï¿½s a CD in each side. Itï¿½s available to buy from our website or from us at gigs, and Unlabel have kindly offered to carry some copies on their books to help us reach a few new people who would have had no chance of seeing us play live, so weï¿½re grateful to Unjohn for that. By ï¿½pitched it to labelsï¿½ I see where youï¿½re going with that, and the answer is no. None of the band would ever condone the use of the reverse side of a CD to lure a hapless goon to their doom, even if it is sparkly, like a shiny, shiny star!

Is interest in the band generally increasing?
Thank you for your question Mike. Interest in the band seems to have increased to the tune of this feature, so thank you. Other than that, not really. Well, maybe a little ï¿½ Iï¿½m still quite interested.

Are you currently able to commit the time youï¿½d like to the band? Do you have understanding bosses that donï¿½t mind time being taken off for rehearsals/gigs?
We rehearse together a lot. I would guess our bosses donï¿½t know weï¿½re in a band, except for Jon, who I think has to declare stuff like that for compliance reasons.

Lastly, will 2006 see you playing more shows, as theyï¿½ve been sparse thus far.
Oh yes, we plan to continue playing, maybe even in your neck of the woods again Mike. Weï¿½re quite fussy which gigs we play, but worth the effort.