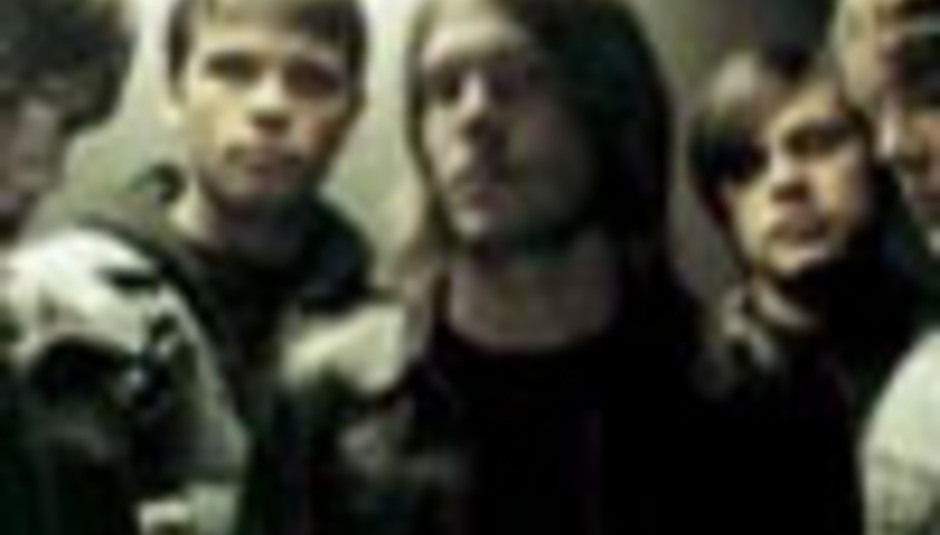 by Kate Price April 25th, 2003
The Kerrang Weekender; well, it turned out to be more of a three-day party than a festival. With a ratio of about one punter to every band member, and a whole host of PR’s, band mangers and other industry types propping up the bar at all times, as far as Kerrang were concerned it must have been a bit of a flop. “I thought was going to be much bigger” Mínus front man, Krummi takes a long drag on his cigarette and continues, “But it’s good because everything’s pretty close. It’s just a few steps and you’re in the bar… and the venue is right *beside* the bar”. Such importance placed on the positioning of alcohol vendors highlights seemingly the ethos for the weekend of most.

Amidst a mind-altering-substance fuelled three days of crazy happenings and drunken shenanigans, we find our way to the chalet of Iceland’s biggest hardcore “buzz band” for a chat about all things ROCK. Mínus bassist Throstur slumps casually on the settee, one eye on Kerrang! TV and its apparent 5-song playlist (Harry, Good Charlotte, InMe and a few other choice selections), the other lazily keeping track of what his more attentive band mate is saying. Vocalist, 23-year-old Krummi seems almost alarmingly calm, collected and levelheaded after an enraged, explosively thunderous performance some 60 minutes earlier. Long hair, leather trousers and arms scrawled with designs in murky black ink, yet Mínus are far from the rock ‘n’ roll cliché they might appear.

“This one’s the star of David – I’m catholic”, he points to a design on the inside of his right wrist, then moves up his arm to admire a recent addition; a representation of Jesus’ portrait committed to his biceps only two weeks earlier. Before I have chance to start thinking P.O.D, he jumps in, “We’re no Jesus band or anything, but my beliefs are important to me and these are marks of who I am that will stay with me forever. That’s not what the band is about though.”

Mínus play a complicated meld of hardcore, metal, punk and something slightly more avante garde, but after the raucous ear-drum terroriser debut LP 'Hey, Johnny!', and the follow-up 'Jesus Christ Bobby', new track ‘Romantic Exorcism’ has seen the band accused of jumping on the ‘Scandinavian garage rock’ bandwagon. An allegation Krummi scornfully denies, “This is nothing like The Hives. We don’t play garage rock, if you listen to the album what we’re doing is a long departure from that whole scene.” And the melodic direction of the new track? “It’s very different to what we were doing before. It’s the poppiest song on the album but we rushed into the recording of it. It was very watered down - It kinda worked as a temporary thing for release in Iceland, but we’ve re-recorded it and now it’s a lot more… horny.”

Indeed, the whole album is a new direction for the band, and one Krummi seems undeniably pleased with. “It’s a big step for the fans who were expecting the same album again but we’re not going to release the same record twice. We’ve grown as individuals and our sound has developed. The other record was so noisy and trebley; it hurts your ear. We wanted to finish that chapter and make songs that would have a lasting impression.” His promise for the new album, provisionally titled ‘Halldór Laxness’, “It’s more professional and focussed – it’s just better!”

Back in their homeland, Mínus are the biggest bands of their genre and indeed, one of the few playing metal/hardcore at all. So, it’s unsurprising that such a sharp change in direction has caused some speculation amongst their fan base, “A lot of the bands today who’re playing metal/hardcore sound the same and it gets tiring. I think a band needs a voice… We’ve really tried to reinvent ourselves and we’ve lost a lot of fans doing that, but we’ve also gained new fans – people who’re not in the hardcore clique or scene. It’s a lot more accessible.” The singer pauses for a moment’s thought and summarises, “We’re really starting from scratch with the new album and - that’s fine with us. This is how we want to do it.”

As the band move out of Iceland again, touring in America and here in the UK, all of a sudden people seem to be taking more notice. That afternoon, as they took to the stage for a riot-some performance, their feet were swarming with a mess of flashes and camera bags as the photographers got snap-happy, capturing the faces of ‘the next big thing’. A notion Mínus are alarmingly sceptical of, “There’s always the buzz when you first start. Everybody comes to the shows and everybody likes you, then a year passes and other bands come; you become yesterdays news. But of course, we want the publicity – then maybe we’ll sell some records and get some money!”

A cynical, yet realistic and frank attitude rides with his words, and when finances are hit upon the frontman’s anger is apparent, “We’re fucken broke” he spits. “We’ve been doing this for many years and we don’t have anything. We’re the musicians who’re putting all the work in and we’re not getting paid, yet the people around us are getting paid and they’re getting paid pretty good. It’s very frustrating.”

So perhaps Mínus will get those record sales, hit the big time (“We’d love to play with the heavy-weights of course, who doesn’t?!”) and take over the world. Perhaps it’ll take them a little longer whilst they continue to search for their sound and follow different musical directions. One things for sure, Mínus are not gonna leave the world without their stamp. Shattered eardrums, energy drained bodies, convulsing eyeballs and THIS is just the beginning. You’ve been warned!