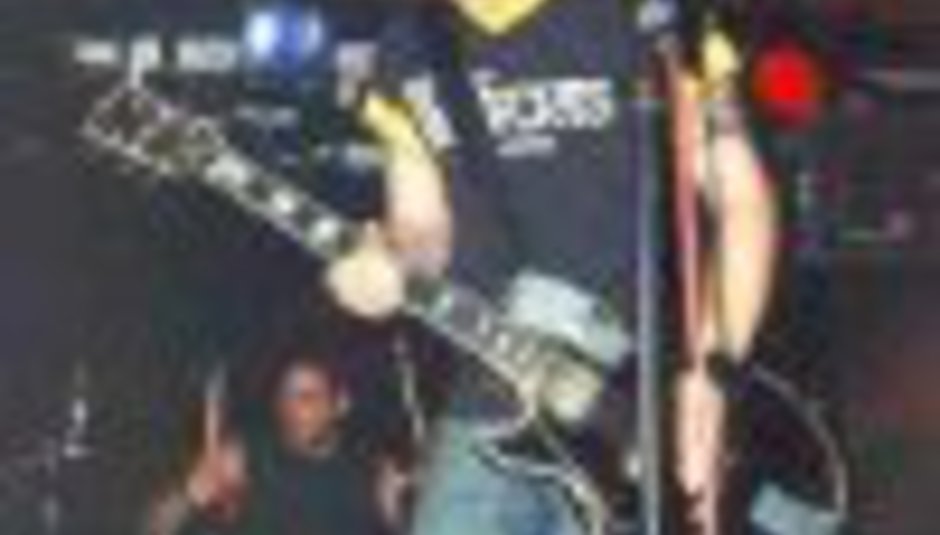 "I give garage rock six months"

"I give garage rock six months"

by Stu Chown April 21st, 2003
Currently rocking their way around our fair shores with Funeral For A Friend, New York's Instruction are one rock band who live up to the hype. It's not garage, it's not emo, it's not grunge. It's rock, and it comes in plentiful amounts. I met frontman Arty Sheperd (aka 'Arty The One Man Party') in Dundee.

How's this current trip going?
Great. It's mostly been up north, mainly Scotland. The Kerrang! Weekender was fucking insane - it was more of a party than a show. Camber Sands is a weird place. It was cool because our buddies Hundred Reasons and Hell Is For Heroes both played, so we all had a massive blowout.

What do you think makes Instruction different from other current US rock acts?
Apart from good tunes? I think we have something to say, something that goes beyond crying about not getting laid or crying about an ex-girlfriend. I think there's a lot more important stuff going on that needs to be thought or talked about and I think that music is a good way of getting that across.

When (Adam, Ti and Arty Instruction's previous band) Errortype:11 fell apart, did you automatically think of starting a new band?
Oh yeah. It was immediate. When Errortype split, the three of us continued to play together, and then Tom (Capone) joined a few weeks later. It was really quick. Our first rehearsals were in the beginning of October, so it's all been pretty rapid from then on.

Tom was previously in Quicksand, who were a very influential band - did you find that daunting?
[Laughing]Who's Quicksand? Well…I played with Walter [Schriefels, Rival Schools' frontman and former member of Quicksand]in a band, so I kinda got over that. But it's still weird, I mean, I remember being in the front row seeing Quicksand, and they were a band that changed my life. We don't tell Tom that we're starstruck.

The songs on your 'Great EP' give the impression of someone pissed off with the whole world - are your lyrics written from personal experiences?
Yeah, pretty much. Just looking at things for the last two or three years - the way that punk rock has turned into mainstream pop music. I guess Green Day was that way too, but I think they came from a place that was much more sincere and at least they did the punk rock tours and stuff. It's all this Good Charlotte and Simple Plan shit, it may as well be boy band music. That's not what punk is supposed to be about - and if it is, then at least have something to say, if you're going to wear the clothes and claim the title. It's just benign, safe and crap. You may listen to some of our stuff and it doesn't sound like what people think is punk rock, but I'm not going up there and playing music that people will immediately love - it has to be challenging and where is the challenge in giving people the same spoon fed crap? And yes, I'm an inherently angry person, through 'x' years of struggling and seeing other people…I guess it's kind of jealousy coming out, I'll admit it. The whole 'garage rock' thing is just silly too - there are a lot of bad, bad bands getting huge record deals but they'll never ever sell records.

You've got very strong ties with the Gravity DIP label - they managed ET:11 and now Instruction, they released the records, arranged the ET:11 tour with Hundred Reasons - how did that all come about?
We met Hundred Reasons when they were recording at the Magic Shop in New York and my room mate is the head engineer at the Magic Shop, so I knew they were there, but I forget how we got in touch…we just hung out, and one band couldn't make the tour they were doing, so they asked us. Errortype was nearing the end at that point and that tour was a big regenerator for us to continue us. During the tour, we spoke to Mark and Jane [Pyrcraft and Unwin, founders of Gravity DIP] about managing us and things just fell into place. When Instruction started, all of that just carried over.

Does it worry you that you're more well known in the UK than at home?
We are, yeah, much. But it doesn't really bother us that much. We've not had the time to put in work in America and obviously we need label support. It's much easier to tour here in the UK for the amount of money you spend and what you get out of it - you get loads of people coming to shows, and good press. We just haven't had the same opportunities in America. If we were to get on a Hell Is For Heroes small tour of America, then we'd be right on par with what we're doing here. We basically decided to come here first for financial reasons and the fact that we had management and a booking agent here already. We don't have that in America. Not yet, at least.

There are a lot of New York bands blowing up at the moment - the whole 'garage' scene with the Strokes, but also Glassjaw, Taking Back Sunday, Brand New - how long do you think it'll be before Instruction can join that list?
As far as bands like Taking Back Sunday are concerned, I hope that shit lasts forever. They're all from Long Island, where I come from. And they've all done their stuff at a very indie level and worked their asses off. With New York 'garage bands'? It's funny, you walk down the street at home and everybody looks like they're in The Strokes. When you have as specific a genre as that, then it tends not to last - I give 'garage rock' about 6 months. The big bands will stay - The Strokes, The White Stripes - but the rest won't sell and they'll just get dropped.

Do you find a difference between UK and US audiences?
Considering we've only really played to industry types in the States, I can only go from Errortype days. And UK audiences are a lot younger. I mean, we wouldn't be playing to 14, 15 year old kids at home - although maybe someday. I think this country has a bubbling rock scene and that's the future for the next three or four years, a heavier style of rock music and that'll continue until the current crowd go to university, become indie kids and take ecstasy.

And what about differences in bands - for example the work ethic, or in sound?
I think bands here have got it easier - it's much easier to tour the UK. I think all bands I've played with here work really hard, but when they go to America, they'll get a rude awakening, and see what touring really is. Although, bigger bands will be touring in big buses and stuff, and they'll never do it like we did it. We toured in a fucking old mobile with this fucking trailer on the back, it was ridiculous, having five people and the gear stuffed into a car. It was fucking brutal. I think where their work ethic comes in is in the songwriting, and they're doing a fucking good job of that. And there's definitely a different sound. I think bands like Hundred Reasons and Hell Is For Heroes take what's happening in America and give it their own twist. There's something inherently different when an Englishman writes a song and when an American writes a song.