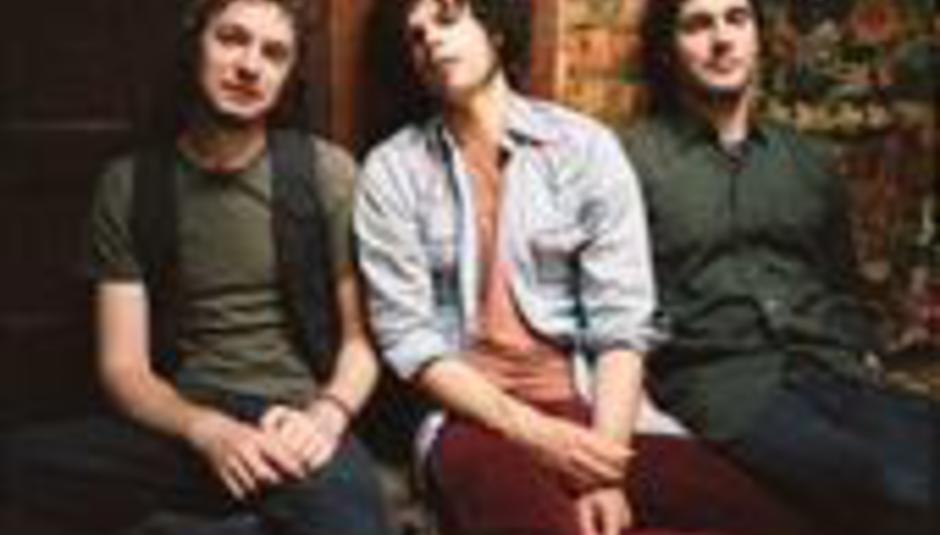 Andrew Stockdale (guitar & vocals), Myles Heskett (drums) and Chris Ross (bass & keyboard sounds) are Wolfmother. This time last year they were employed in humdrum dayjobs whilst jamming together for hours most evenings and deciding on a way to turn their jams into fully fledged songs. The first fruits could be seen on last year's hard-to-find 'Wolfmother EP', which is set to be re-released as we speak, while their relentless quest for sonic perfection has seen them develop into one of the most exciting and innovative live acts doing the rounds at the minute.

Having just completed a short tour of the UK, the band are now gearing up for the release of their debut album which is set to come out in May, while their name has been muted as being one to watch out for at this summer's glut of festivals, of which they have already been confirmed for Coachella. DiS caught up with Andrew Stockdale prior to the band returning to their native Oz for a well earned break...

So, how did the band get together?
We all met through mutual friends around 1999/2000. It took four years worth of jamming for us to get to where we are now. We never talked to each other about what kind of music we were going to play. It was easier to decipher where the music would take us by looking at each other and seeing who got off on what...

In that first four years, did you play to other people?
No. I guess we never really saw ourselves as a band at the beginning. Our first live show was just a three hour jam. It was then when we all realised that there had to be some kind of definition by way of a beginning, middle and end to each of our "jams".

And now you've got a bunch of songs together, how would you describe your music?
Extremely unique! We're really conscious of bringing new ideas into our music. I don't believe in using the same formula twice. There are so many artists out there who've made a career out of regurgitating the one great song they may have in their possession. I find that kind of depressing. If we had to resort to doing that we probably wouldn't bother with the band. Making music is like having sex - there shouldn't be an instruction manual or guide that you have to follow.

Your live show is starting to pick up rave reviews. Do you have all this suppressed energy which you exhalt live or are you the same in the studio?
I think we're the same whatever the setting. I see both our studio and live performances as being equally beneficial to the other. We need to contemplate our musical arrangements in the studio and then we need to play live to get into the moment of playing and performing for an audience. I think if we had to do one without the other for a long period of time we'd just get sick of it.

So what is the best thing about being in Wolfmother?
Just being able to play our songs in front of an audience and getting a momentum going. Even now, we have to pinch ourselves and go "how did it get to this?" I suppose the other side of the coin is not to get too carried away with the possibility of fame, y'know, stay realistic. People are too obsessed with fame at the moment without any justification for the adulation. It can be a double edged sword in that it creates a false sense of ego and when the whole furore around you dies down its hard to get that scope for normality back. I guess we've all lived enough life to be able to maintain some kind of perspective so...

Are there any other artists in Australia at the minute who you feel we should know about?
Its sad to say that at the moment no one really springs to mind. I guess thats down to the fact that we're more immersed with great bands of the past to really notice any scenes or trends that may be happening at present. People like You Am I, who were probably the most underrated songwriters of the last few years. I guess people travel more now and have access to the Internet, so it'snot so relevant to build a scene from within your own backyard any more.

DiS recommends: 'Dimension' and 'Apple Tree' from the 'Wolfmother EP'.

For more information visit the band's website HERE and their myspace gaff HERE.