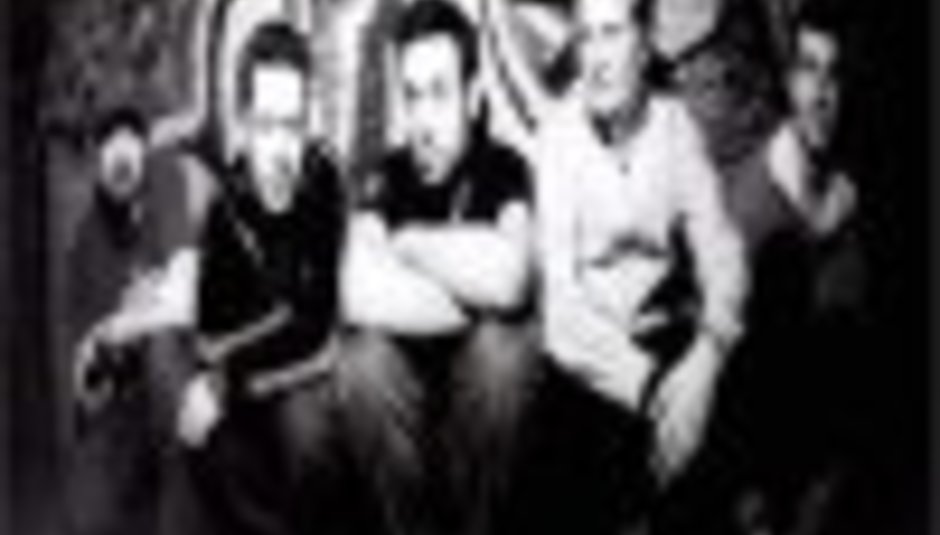 by Stu Chown March 18th, 2003
The last time I saw Jerry-Built was at the Fighting Cocks pub in Kingston, at their Christmas bash. They were incredibly drunk. And then attempted to play. And were actually very good. Where they going to be sober when I hooked up with them in Glasgow? Strangely they were, but after one pint they were talking about jogging, Christina Aguilera and the A-Team....

So how did Jerry-Built come into existence?
A: Sami can tell the story...
S: Oh, fuck off! Christ...some of us have known each other for a while, and we went to a Samiam gig upstairs at the Garage (in London).I met Andy, who I hadn’t seen in a while, and him and Magnus had just finished with their other band, The Lustjunks. They were trying to start a new band, needed a bass player and asked if I’d do it. Oh hello Ash [at this point Ash’s ‘Burn Baby Burn’ bursts from a King Tut’s speaker and scares the shit out of all of us]. So I joined, then they dragged Dave along from various gigs around Kingston - he’s basically a big scenester who’s always dancing to everything; and then we got Tim along to add an extra guitar, he was in Jetpak, which was Larry (Hundred Reasons) Hibbitt’s old band, and erm...that’s about it, yeah.

So the addition of keyboards came about purely by knowing Dave?
A: Well, I’ve known Dave for years as the man who goes to every gig and is so enthusiastic that it’s fucking ridiculous, and he jumps around like an idiot. I thought that’d be funny.
D: I can’t play for shit.
A: Nah, he’s really talented! Dave’s been playing keyboards for years...
S: He just doesn’t know it!
T: He’s a grade 8 pianist, don’t you know.
M: Yeah, he’s like Chopin.

Presumably you had a strong belief in the band when you were starting, has that changed at all?
A: No, not at all.
T: Just to carry on doing what we do, and have fun.
A: There’s no hidden agenda about what we wanna do, we just want to have fun. Just gigging around, and playing in places we’ve never been to before, and getting the chance to do that is amazing.
T: Yeah, and playing in front of as many kids as possible.

Has the sound changed at all?
A: Nah, I think we’ve just got tighter. That’s it really...we’ve always had the same songs, there’s not been much of a progression. Some of the new stuff we’re writing is a bit heavier. I think that’s the progression of playing live.

If you had to sell Jerry-Built to someone who hadn’t heard the band before, how would you do it?
M: It's sunshine, moonlight, goodtimes, boogie, innit?
A: I think if people wanna go out and have a good time, see something that’s loud, fast, energetic, then I think we do it as well as anybody.

You’re signed to Firefly Records, so how did that come about?
T: It happened through Kids Near Water, didn’t it?
A: Yeah, well it happened on two accounts. We did a demo with John Hannon in Southend early that year, and pressed them up ourselves. I’ve known some of Kidsnearwater for years, because we used to play Exeter in our last band quite a lot, and I just gave a copy to them, and sent some to some mates I knew. Chris [head honcho at Firefly] somehow ended up with three copies because everyone thought that we’d be great for Firefly. He put us on a gig upstairs at the Garage (London) with Beezewax and Otherwise, and that was our fifth or sixth gig, and he said "yeah, I wanna do it", so...it was that simple.

Firefly is synonymous with great bands - The Copperpot Journals, Scuttle, Kidsnearwater - have you got a favourite to play with, or in
general?
S: We did a tour with Kidsnearwater, and it was absolutely fantastic.
A: Yeah, Kidsnearwater, we’ve known a few of them for years, and we’ve had a lot of good times with them. And I’m a really big fan of Scuttle...Matty from Scuttle is a star, he’s absolutely hysterical, the drunk man about London. With regards to the others, we know them all, and they’re all cool. But Kidsnearwater and Scuttle. And Otherwise. And Sunfactor.

You were talking about pressing up your own demos and stuff - do you have any strong views on the DIY of the punk/hardcore scene?
A: I believe in people doing it themselves, but the one thing I can't stand is not being able to say what you think if you're trying to fit in with cliques, and I'm not the sort of person who'd do that. That's the whole thing I don't like, the clique-iness. But with regards to the DIY work ethic, like gigging hard, working hard, then yeah, I agree with it. There's no other way to do it.

So you wouldn't have any qualms about signing to a major label?
A: All my favourite bands signed to a major....
D: [taking the piss] Bon Jovi....
A: Jawbreaker, The Replacements, Husker Du all signed to a major, and with regards to some of them, I think they did some of their best stuff on a major. That's not to say that we wouldn't sign to a major, but you never know....

Tim used to be in Jetpak with Larry Hibbitt, who's now gone onto big things with Hundred Reasons, how long do you think, or would you like it to be, before you can reach that level of success?
T: I don't know....
S: How long's a piece of string?
A: We're really happy with Firefly, and that's it. We've had the album out, and...y'know, we live for doing it as it happens. In all honesty, it's very unlikely that we'll get swept away to a major. We're just happy to get the record out, Chris does a fantastic job and he's always supported us, so....yeah, we're happy.


What's currently on the tour van stereo?
S: System Of A Down! Er...The Replacements, far too much.
M: AC/DC.
S: Guns 'N' Roses.
D: And Radio Two in the afternoon!
T: Yeah, we just flick through radio stations and find cheesy songs.

And what about on your walkmans then?
D: Various stuff. DJ Shadow, I managed to blag that into the tape deck on the van.
T: Dave's into experimental stuff....
D: "Dark hop". Other stuff....Pet Shop Boys, Something Corporate
A: I only listen to three bands: Mega City Four, Husker Du and The Replacements.
D: And The Senseless Things.
A: Oh yeah, thats four.
D: And the Foo Fighters!
A: ....
T: And Ned's Atomic Dustbin!
A: ....
T: And many more!
M: I'm listening to Superchunk.
T: I quite like the bands on Revelation, that kinda scene in the US, and pop stuff from over here...it's all cool, at the end of the day.
A: I like the new Christina Aguilera song....
T: Yeah.
A: And whats that one......
D: Justin Timberlake?
A: Nah, that one with the girl and the piano....
T: Oh, Vanessa Carlton!
A: Yeah, Vanessa Carlton, I quite like that....
M: Yup, we all have our problems....I've recently been listening to a lot of Alice Cooper, Beezewax, Scuttle, Kidsnearwater.....
T: The Firefly roster then....
M: Er...Route 215...who else have we played with?
A: Oh! Thinktank, I've been listening to the Thinktank album recently, that's cool.

Who'd win in a fight, Batman or Spiderman?
A: Oh, you'll need to let Sami answer that one....
S: [As if I should know the answer] Oooh, let me see....Batman is the only superhero without any super powers...

So technically he isn't a superhero then.
S: No, but you see, that's why he's so fucking cool, because he is...
At this point it turns out Sami is a comics expert. He goes into a long winded, but utterly convincing argument as to why Batman is the coolest superhero of all time. The tape didn't catch all of it, though. Honest.....

A-Team or Thundercats?
Jerry-Built: A-Team!
A: "'Cos if you've got a problem"....hahahaha!
T: Yeah, 'cos each week they get an armoured van from some chicken wire and some toilet rolls....
M: I like BA (Baracus, aka Mr. T) just because he's got the BLING factor.
S: And he used to be a wrestler....not quite the Rock, though....

Who'd win in a fight out of Jerry-Built?
T: Magnus.
D: Magnus.
A: Magnus, because he pillages villages because he's Scandinavian. Although Dave has got a bit of a bad temper....
M: And I'm a pacafist.
D: And I'm shortly to do a suicide bombing on Iraq.
T: Well, yeah, naturally...

Aside from world domination, what's next in 2003 for Jerry-Built?
A: Taking a couple of months off to write an album. We're gigging until next Saturday, and then we're taking 3 months off to record and album, and if turns out well, then hopefully we'll be sorted...