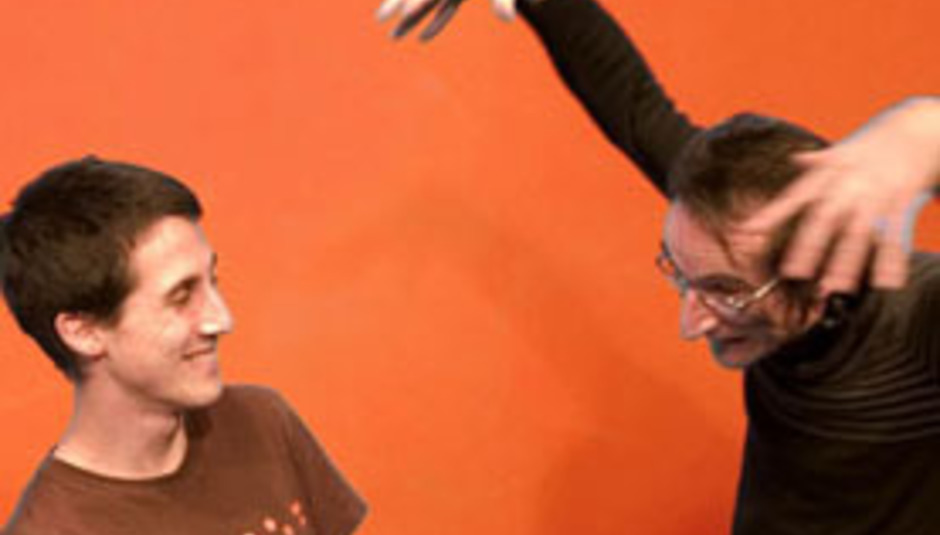 Like when you're exposed to a sequence of images flashing by too fast to see properly, and you just know that all of those images are being stored somewhere in your brain, The Books' music is teeming with information. Crackling, disembodied lines of dialogue swim up briefly through the pungent mix, vanishing just as quickly as they arrived. Songs subtly build, constructed from quiet percussive clicks and microbeats, bows sliding over cello strings, plucked guitar notes (often treated - looped, glitched and reversed); whispered vocals sit against the constant flow of words and samples gleaned from the detritus of recorded history. The result is a delicate web of sound, low-key, bombast-free and humble, bristling with content and potential.

Talking to Nick Zammuto and Paul de Jong individually over a table in the bar under Kilburn's (sold out) Luminaire venue, it's striking how much common ground the two share, how respectful they are of each other's abilities and musical instincts.

Nick Zammuto: "We met in New York City in 2000. We by chance happened to be living in the same apartment building in upstate Manhattan. We were introduced by a mutual friend - the sister of my girlfriend at the time knew Paul well. So he had us over for dinner, and shared some of his sound collection with us, all on minidisc at the time, he didn't have a computer yet. He called it his reference library. I was doing the same kind of collecting - we quickly realized that if we brought the two together we would really have something, and started working together pretty much straight away."

Paul de Jong: "At first there was an interest in each other's minds and artistic preoccupations, and an interest in each other's accumulations of sound, and the way we both listen to things. Nick then said, let's start a band, which took us both by surprise. I've been in bands before but never really taken it seriously to the point of seeing if there's a whole concept there."

Did you started playing together straight away as well?

NZ: "Yeah, although I'm not much of a musician. I've started playing guitar more seriously since the band came about. Paul's a classically trained cellist. I come more from a visual arts background, so I see music really visually when I'm composing." I had wondered if there was an art approach behind The Books' music.. do you relate what you're doing to the destruction of the grand narrative in post modernism, and the need to create your own meaning, for example from all the disparate pieces of sound used in a Books song?

NZ:"Well, I've always had a conceptual" mode, in my visual art as well. But I think postmodernism has become such a catch-all phrase it's pretty much lost its meaning now."

PdJ: "Collage has existed for a long time in different forms. It seems like there are waves of it, like a society has to build up a critical mass of information. At some point it starts breaking it down again, and that's the point at which there are certain people who notice relations and start making art out of these elements. Like with dada and surrealism in the first two or three decades of the last century, with the printed word and the printed image. The printing technology meant that they were flooded with images to use. With that comes a certain devaluation. In a way, this devaluation of the carrier makes the content more tangible. If something is unique, then its form can be more valuable than its contents. So if there is lots of something, and it's a shared source, the content becomes stronger because of that. I don't think it's that new what we're doing: I think it's happened before, in many different ways, just not in the same media. I think we're part of a larger movement, but it's unnameable, especially because we're in the middle of it right now."

It's very open-ended isn't it - all those disparate sound clips with the context removed, so you're left with disembodied sentences, tiny slices out of time, built into a new fractured narrative. There's a lot there to tap into.

PdJ: "Yeah, it's more a matter of suggestion than concretization. We feel very comfortable in that. Not because we don't want to be to the point, it's actually very much to the point: to let people create associations. All we do is really try to forge it all together in a musical way. Each track has to flow musically, and literarily, and in timbre... the narrative is a slice of an ongoing narrative that runs throughout our lives. It's like a small cut out of a long and barely comprehensible story."

"For us, the greatest collaboration is with the listener. What we make is fifty percent of the work - the other fifty percent is to be completed by the listener. It's extremely open for personal interpretations. I think there's a special kind of person that really connects to that, and I think it's expanding; peoples' listening behaviour is getting broader and less mainstream. The internet and all these virtual communities help that directly I think." Is The Books a full time job?

NZ: "Yeah, although it's very low to the ground. I moved out of New York City mainly to save money so I could start a studio of my own. I haven't made much money, but I haven't lost any either. We didn't know that the main way to make money is touring, because nobody buys CDs any more. So we found that we could make good on all the publicity that free downloading gives if we go out and play to people. Which has actually been good, we were a little worried about it at first, but it's been a lot of fun."

Seems like The Books started out as entirely studio based...

NZ: "Yeah, and our interest didn't fall outside of the studio at all, until we were kinda forced into going on tour. But now our aesthetic has changed because of that into a different mode of working."

PdJ: "I find that the studio is still where I can really develop. It can take a month or so to write a new track - the development of the libraries, the listening, digitizing all kind of sources, categorising, and more listening to internalize the library.."

Do you have an endless amount of samples that you can use, or are you constantly on the lookout for new stuff?

NZ: "Well we're both really quite selective about what we'll take into our libraries. It has to be something that really hits us in some way. It has to work emotionally, conceptually, and just sound good " all of those things have to be there. We spend hours upon hours going through tapes, listening, taking 2 seconds here or 10 seconds there. Our library is fairly pared down to begin with, and it gets distilled further by listening and filing away."

So there's a huge job of arranging and taxonomy before you even start to make songs out of the gathered materials?

*PdJ: *"Exactly, yes. We love to do that. Once we have it we listen and we start taking the samples we both fall in love with into different folders, called "must use' or whatever, which can contain hundreds of samples."

Where do you find the sounds?

NZ: "Paul started out in the vinyl world, he has an exhaustive collection. Well, not completely exhaustive, but it's getting harder for him to find stuff there, either because it's too mainstream or he's seen it before. He may move onto 78s at some point. But at the minute we're using a lot of video tapes, we've been looking in thrift stores for home video tapes that people have thrown away, outdated instructional videos, that sort of thing."

Do you see anyone out there as your contemporaries?

PdJ: "That's more for journalists like yourself to decide than for us. I guess lately we've been listening to a lot of Captain Beefheart. We both found it so inspiring... the absurdism. Absurdism is important. Humour is the perfect back door to the profound. It's a great way to bring listeners to a point of arrival that they never expected to reach."