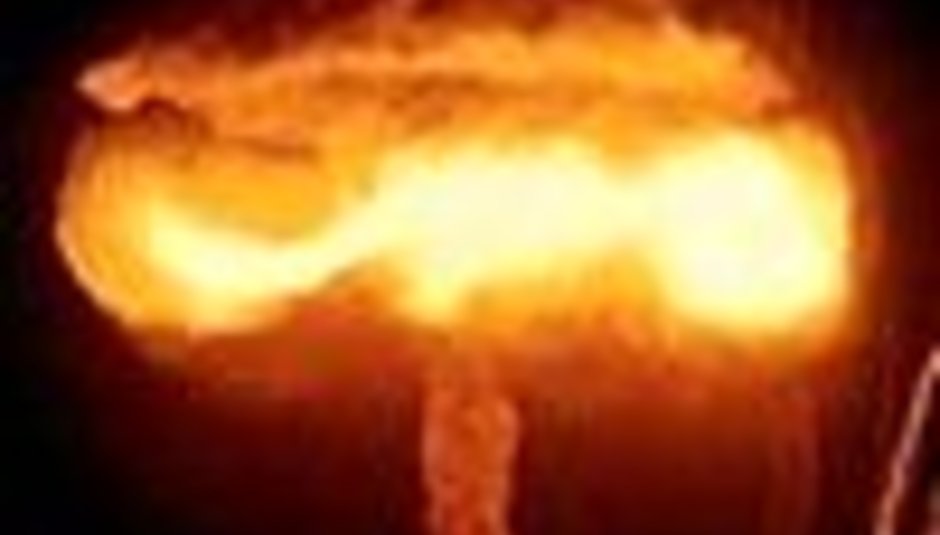 Songs to die in a nuclear holocaust to...

Songs to die in a nuclear holocaust to...

by Jon Smith February 23rd, 2003
Every day we’re told what a dangerous world we live in. Terrorists are ready to detonate a “dirty” nuclear bomb in a major city, say the papers, and rogue states will soon be peppering these shores with weapons of mass destruction. And let’s not forget North Korea recently restarted its nuclear weapons programme, while – perhaps inspired by “fun size” Mars Bars – the US plans to develop “mini-nukes”. It looks like a mushroom-cloud shaped Armageddon is just around the corner.

Of course, there’s very little you can do when a nuclear bomb goes off. Sand bags and gas masks ain’t gonna help, and you can forget hiding under the table. So you might as well forget stocking up on bottled water and tins of beans. No, as music lovers our preparation for the imminent atomic holocaust should be dedicated to making sure that, when our skin disintegrates in a flash of thermonuclear heat, we’re listening to the most appropriate songs. Can you imagine anything worse than being toasted alive to a Ms Dynamite or David Gray single?

Contemplating the painful death and the destruction of humanity is, understandably, stressful. So, as a public service, I have compiled a short list of songs to die in a nuclear holocaust to. My choices are by no means definitive, and are wholly subjective. Make sure you have a list of songs you are completely happy with. Just because the Bomb won’t discriminate doesn’t mean you can’t.

2. ‘Swamp’ – Talking Heads
Like ‘Ask, this was written during the Cold War, the last time we were constantly threatened with radioactive meltdown. Even so, its disjointed, robotic lyrics – “Click, click, see you later,” intones David Byrne over a muddy, synthesised funk stomp – are equally appropriate whether a nuclear bomb has been set off by terrorists or a superpower.
Where to find it: The Sire album ‘Speaking in Tongues’ – Talking Heads

3. ‘King of the World’ – Steely Dan
If you’re lucky you could be the sole survivor of the atomic blast, in which case you’ll be in the same situation as the narrator of this jazz-country gem – and you'll be King of the World with it. Sounds great, but with only cockroaches for company you’ll soon be bored – “I’m reading last year’s papers, although I don’t know why,” sings Donald Fagen. Not to worry, the fallout’ll get you before long, although if you stay inside you might live till Saturday. Even if you don’t survive, the meandering, jazzy guitar solo on the outro is one of the best anyone could hope to die to.
Where to find it: The MCA album ‘Countdown to Ecstasy’ – Steely Dan

4. ‘Man at C&A’ – The Specials
“Warning, warning, nuclear attack!” is the cry that opens this moody, minor-key slice of ska. The title is a reference to being “the man in grey” without “a say in the war games that they play”. Nothing’s changed since (although references to Moscow and the Ayatollah are dated). Thing is, you’re not going to have a say, but you’re still going to be annihilated. At least you can take consolation by grooving to one of the meanest, funkiest grooves the Coventry outfit ever recorded. Great brass score too.
Where to find it: The Chrysalis album ‘More Specials’ – The Specials

5. ‘Goodnight’ – The Beatles
I was going to put ‘The End’ by The Doors as my fifth choice, but – given its famous appearance in ‘Apocalypse Now’ – it seemed to clichéd, and, what’s more, too serious. If you’re going to go, you might as well go with a big sarcastic smile on your face. Playing this schmaltzy orchestral lullaby, sung by none other than Ringo Starr, is nothing less than the ultimate act of defiance. Thought your nuclear bomb was going to make me cower in fear? Think again, I’m listening to Ringo, and I’m going to dream sweet dreams for him – and for me.
Where to find it: The Apple album ‘The Beatles’ – The Beatles

Warning: A nuclear attack may occur without warning, and radiation spreads at tremendous speed. Make sure you have your tracks of choice, and a means to play them, with you at all times.