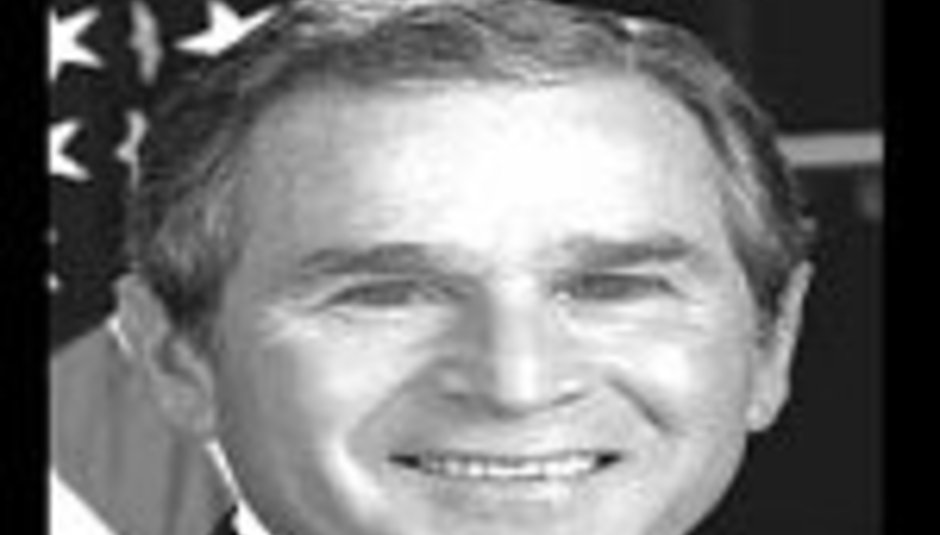 by Sean Adams February 15th, 2003
February, it's not even spring yet, but there's something collecting on the breeze 'round these parts.

Yeah, there's this whole war thing, a lot of DEMONstrators being all "anti" and there's really not enough people being PRO-peace. It all seems like it's a little too late to me, this 'protest' should've happened before the troops were even sent out. A media-made "historical" afternoon out in the capital is hardly gonna stop gun-hoe Bush and his stoopidity now is it? That guy thinks having thousands of nukes, selling them their weapons makes it all alright. He forgets, when he talks about the way human rights are being violated, he's spending billions on a space programme whilst a huge percent of his empire live on the edge of poverty, in huge squats called cities, many of his people aren't allowed to learn about evolution and thousands live in fear of being put on death row, mostly because of the colour of their skin. And then, amid all that, he has the balls to accuse mario-moustache man in the desert with the petrol, of being "EVIL"???

None of the counter messages are ingrained into our culture to really hit hard enough and resonate eloquently. Performers reading this, please start talking in real-life terms to people who respect what you have to say. Use whatever means necessary. Simple "i hate bush" tee's on cd:uk, short rants on record covers, links on your websites, whatever you can think of..

But let's not talk all that jazz.. some good stuff's been happenin' in our little world of rawk bands, poets and dreamland lo-fi bliss. We've been given a collection of tracks from living legend Saul Williams here who puts the anti-war stuff into context perfectly, it's coming out via Ninja Tune in the near future.

This ain't ALL about the war… there's much more to life and much more to change in this world, especially if you consider how many people will die in this "war" and compare it to how many people die because of poor health (from say smoking or abuse) and poverty. There's so much that needs changing. Like the shit state of the music scene, which may sound insignificant but if music/the arts can put something extra into someone's life, at least living can feel more worthwhile and meaningful. Just maybe.

In our own little way, pulling together the independent media collective that is DiS, the strong community of readers (that's you!) and making people more aware of what we're about has hit a new level. This week I was interviewed for Freeserve's 'Be Free' members magazine and some pictures of myself, Adie, Janey and Mat were taken down at the Windmill in Brixton (home of dis' fortnightly unsigned showcases), that mag should be on the streets in March/April'ish time. I also got me mitts on 'Is This Music?' a Scottish mag/fanzine run by the people behind JockRock, who interviewed me for a whole page. See isthismusic.com for more info.

This week we also announced our new night at the Underworld and a new night in Colchester not to mention that we're pulling together the bill for our next night in Cardiff, that the Kinesis/Reuben/MBA tour is selling out all over the place (send us your tour reports to reports@drownedinsound.com) and the support bill for the Biffy Clyro tour should be announced next week.

Also, I've been taken on by BANG! Magazine, which is a new mag from Future Publishing (Metal Hammer, alsorts of computer Mags), by the Creators of CIRCUIT; to run a lot of their news and write a few reviews here and there. More news when the first issue hits the streets.

Phew! I think that's everything we can tell you about for the moment. Lots, like compilation albums, new nights, new tours and lots more coming together under the scenes tho…

Keep up the positivity, thank you all for your feedback.
Have a great week,
Sean