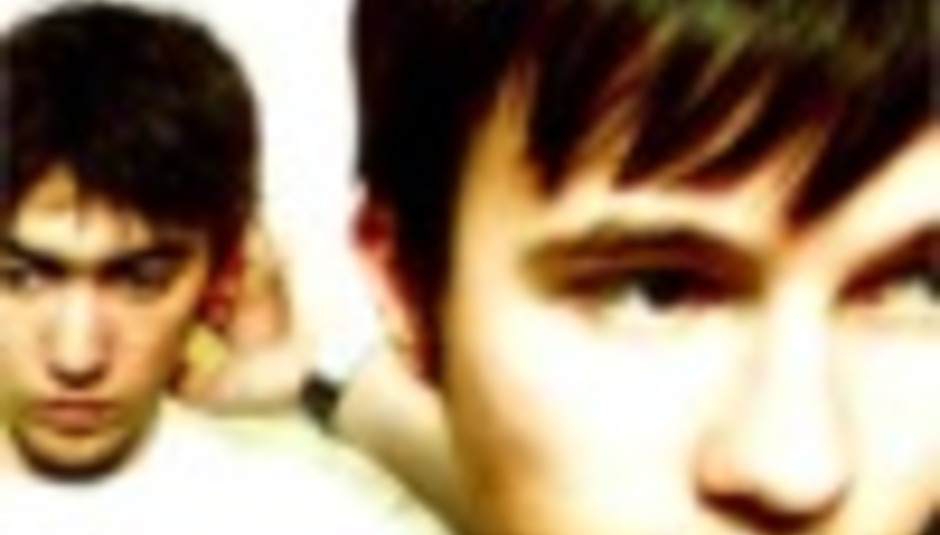 by Raziq Rauf February 6th, 2003
I’m sitting in the backroom of a dingy basement venue in Manchester. It’s grimy and the generators that surround me are currently emitting a tuneful hum and radiating a warmth, which I reassure myself, is all perfectly healthy. It’s all gonna be ok. It really is. If you don’t believe me, all you have to do is listen to the invigoratingly fresh debut EP from Welsh post-hardcore newbies Funeral For A Friend, ‘Between Order And Model’. I am in this semi-industrial hothouse with 40% of said band and my tape recorder so I took full advantage and pressed record…

Being a Welsh guitar band, it is the lazy journalist’s dream as they have a simple and terse comparison readily available in the form of fellow Pontypridd rockers, LostProphets, but Gareth seems unperturbed, “I think we’re as far removed from them as REO Speedwagon are from Bon Jovi. I just think the comparison is there because they are a successful Welsh band at the moment and we’re a band who are gaining some success ourselves and the comparison is gonna be there whether we like it or not – it’s gonna creep up and bite us in the arse … hard” CRUNCH!

Can you shave one of the LostProphets for us?

Matt (vocals): “It depends which area and which one!”
Gareth (bass): “If you pick the drummer, he weighs about 19stone and he’s going to eat me!”
Matt: “I cannot take on Chiplin, I can maybe take on Mike Lewis but only when he’s asleep I think. Gazey would find it funny but Jamie and Ian would probably knock us out. Stuart would be up for it. We’ll try. Definitely try.”
Gareth: “I actually went to school with Ian. I used to work with Mike; I worked with Stuart.”

Despite the record sleeve boasting that they wear Mogul clothing, they contradict matters slightly by explaining, “We don’t find style consciously important but other people seem to and you could be inadvertently starting off a trend, hairstyle wise or something but we don’t think image is important. We don’t, as a band, have an image. The music is far more important to us. We’ve subconsciously adopted =EmO= hair, because we can’t afford to get it. It’s because we’re too poor to have haircuts!”

Why do some Welsh bands find their national identity so important?

Matt: “I think it’s ingrained into Welsh society. There’s a pride element which runs through all the towns, all the valleys. There’s always an air of pride. We’ve grown up with it, it’s ingrained in us. I’m proud of where I’m from.”
Gareth: “Between the time Tom Jones came out in the 60s, and when The Manics and The Stereophonics came out there was almost no recognition for Welsh bands for 30 years.”

What are your views on signing to a major label?

Matt: “I’d question them on why they’re giving us so much money. I’ve come from a place where I’ve been part of the underground hardcore independent scene for a few years and for a major label to be interested in something I’m doing is a bit of a thing for me. I don’t mind it as long as they get it right. I have a fear of getting lost in the whole business.”
Gareth: “We know how to deal with it. A few months ago Sony came up to us and we were very suspicious of them. You pause to yourself and wonder what’s going on. I don’t want to be signed because we’re a metal band and we’re Welsh. I want to be signed on our own merits because people understand what we’re doing. I think if we’re offered the right money for the right reasons, I don’t see why we shouldn’t.”

Who is The Friend?

Matt: “A guy I know called Crazy Bob. Once we ran down a lane to the theme tune of ‘The Littlest Hobo’ wearing nothing but a waistcoat and a pair of Y-fronts…”
Gareth: “It wasn’t y-fronts it was a thong.”
Matt: “No, no, it was a y-front because I had to get a potato in the back to make it look like he’d shit himself. And that’s my friend.”

If you could go back in time, what one thing would you change?

Gareth: “The Mullet…” [gasps all round]
Matt: “Not the mullet! Without it our hair wouldn’t be what it’s like today!”
Gareth: “OK, I’d bring Bill Hicks back. I’d make sure he stopped smoking.”
Matt: “Sad thing that he died. I’m scared to change anything in case I don’t get born or something!”
Gareth: “I’d change my virginity back. The wrong person had it!”

One thing F4aF have not had a great deal of luck with is organised events on a larger scale. Back in September, the annual music industry showcase of In The City was set to play host to some of Britain’s hottest new bands and Funeral… were one of those invited. Come the weekend, they had cancelled their show and many people were left in the dark as to why. Matt explains, “We pulled out. Music. Politics. We did a showcase a couple of days before it and played for 5 to 6 hours. Loads of different people came and saw us and we think we did what we wanted to there. We played to a lot of record labels who said they were going up [to Manchester] just to get pissed. Personally, I wasn’t up for parading myself in front of a bunch of drunken A&R people.” I wasn’t drunk for the whole weekend. Promise. No really. Oh, dammit there’s no hiding from the truth. It seems like a reasoned enough excuse from them, then.

Just a month later the band were booked in to play the Kerrang Weekender. It all went horribly, horribly, not too badly wrong: “There was a bit of a mix-up cos we were going to be on on the Saturday but then they said they’d booked too many bands on the Saturday so we were going on really early on the Sunday. It was really bizarre because we were sound-checking in the morning watching people leave on buses. People weren’t that familiar with us at that point. We were glad we did it. It was a big thing to be asked by Kerrang and hopefully we converted enough kids.”

So was that you stealing money from the fruit machines?

What is your favourite cheese?

Matt: “Mature Canadian cheddar.”
Gareth: “Fuck off! Tesco value mild cheddar!”
M: “Really strong cheese … ya gotta taste it. Mild cheddar’s just bullshit - it’s for wimps and pussies. Mature cheddar all the way. Matt is pointing to Gareth and saying wimps and pussies.”
G: “Let it be said, Gareth is going knock Matt the fuck out when he leaves this interview!”
M: “Let it be said, Gareth can try!”

What are your 5 favourite albums of all time?

What are your views on music sharing on the internet?

Gareth: “I don’t care about money. Let people download whatever they want. I’ve done it for long enough - it would be wrong to criticise it!”
Matt: “I’m totally for it. I can understand both arguments though. Some artists make all their money from record sales and touring but record labels have enough money as it is they are really rolling in it. It gives kids an incentive to go out and buy the record.”
G: “How much is it to join Napster now, because the day they started charging it broke my fucking heart.”

How big is your breakfast bowl?

Gareth: “I got a Frosties bowl free with the box and you can get a shitload of cereal in it!
Matt: “It’s pretty big. I’m not a cereal person in the morning … more at night.”
G: “Ricicles and Sugar Puffs always go down well!”
M: “Coco Pops all the way!”

Funeral For A Friend are hitting the road in February, supporting German punkers Waterdown across the country. Their highly stimulating live shenanigans are going to be jiggery-poking round down near you…