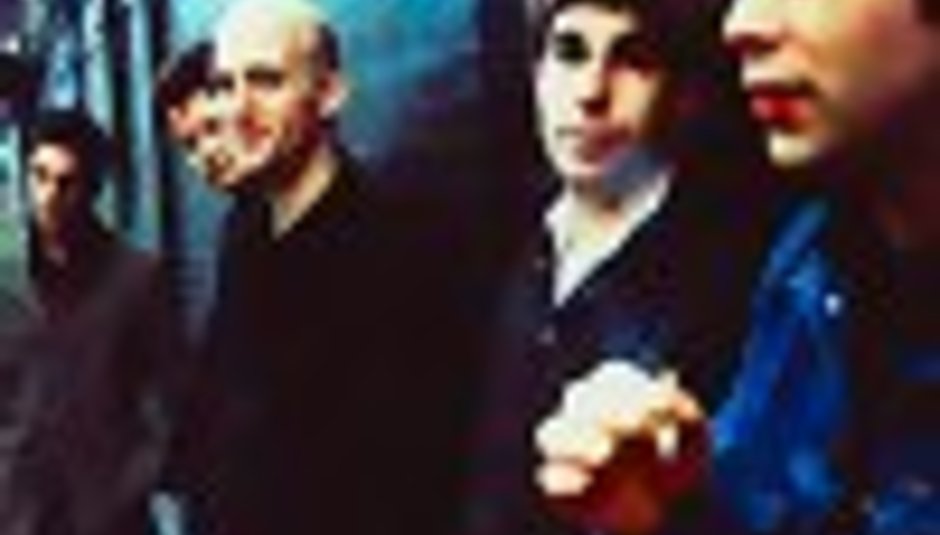 by Jane Oriel December 12th, 2002
Folks seem to be getting the hang of this radio station band name thingy now.

For weeks, when mates and lacklustre chat up merchants have asked what I've been listening to lately, nonplused looks have been returned if I say "Radio 4." They haven't quite been able to frame the words "Do you mean The Archers?" or "Surely not Gardener's Question Time?" but this is now happening less and less. Recent healthy rotation on MTV2 for their 'Dance To The Underground' video has helped matters no end. So for anyone else still a little confused, Radio 4 are a hot funk/punk outfit from NYC, who lifted their name from a Public Image Ltd track and have absolutely nothing to do with the Beeb. So there.

The five man band are currently taking in the UK and Drowned In Sound have been stealthily watching their every move. I'm waiting to chat with their fancy pants percussionist PJ O'Connor about a misspent youth, via tour manager Mark's phone. I also have the odd salacious tale to jog his memory with courtesy of a mutual friend in Manhattan. But hell, this is a rock band on tour. What exactly was I expecting, clockwork?

DiS Hello! Do you have PJ there for me?

Mark Ah, jeez, PJ just took off to a hotel. Um, um we've been having a hectic day and he just ran up to the hotel room. I'm super sorry, oops haha...

Mark Can I either give you someone else or have PJ call you when he gets back? I know he was the one you wanted to talk to, and we were happy about that, but he's the only guy today who hasn't had a shower.

Mark We have the hotel room for another hour, and we just showed up at the club, and we're just running there, and.....

Mark Oh, I'll give you Tommy Williams, he's one of the mouthiest guys in the world.

DiS So you're in Manchester tonight?

DiS How was Nottingham last night?

T It went really well; a really good show. Everyone was so into it, dancing all around. It was crazy.

DiS That's great. Is this the band's first chance to get around the UK?

T Yeah. We've only played London a couple of times, so this is our first tour of your country.

DiS Well, let me tell you what we're doing here at DiS. There was so much interest in your tour that we have posted spies at most of your shows here.

T So, there's gonna be someone here tonight?

DiS Yeah, [a little taken aback] I'll be there. Um, are they putting you up in a hotel or do you have to stay on the tour bus?

T [calming slightly] Yeah, we sleep on it and we also get hotels once in a while.

DiS When you're lucky?

T Exactly! [smiles] I guess that in the UK a lot of your clubs don't have showers?

DiS That's absolutely right. And you'll be lucky to get one "bathroom" cubicle down in Cardiff.

T I love being out on the road. I never want to go home.

DiS I've heard about how you recorded your second album 'Gotham!' by yourselves, then had it post-produced by DFA [Death From Above] - aka Tim Goldsworthy and James Murphy who have been responsible for some fierce production values for Primal Scream, U.N.K.L.E. and Trans Am. How do you manage to put all their new sounds together with your songs out on tour, or don't you bother?

T No, we do and I think we do it really well. We come close but you don't want to do the exact thing that's on the record, know what I mean? We want to do it a little differently. There's always room for improvement but for now, I think it's really great. Oh, we now have Gerard! He's the handsome new keyboard player. [some laughing in background]

DiS I know the album is quite politically minded but it's more about local politics isn't it? Do you guys really get hot under the collar about all this, or is it more down to rock band posturing or sloganeering?

DiS Has anyone actually been prosecuted for dancing in public after former Mayor Rudolph Giuliani revived the 1926 New York Cabaret Licensing Law?

T It happens all the time.

DiS No kiddin'! So it is an active law not just a threat?

T Oh yes, sure! None of us have gotten fined, but the clubs get fined and they'll get shut down eventually. The clubs have a special license for dancing and if you don't have it and people are dancing in your club then they'll fine the club. It's a pretty steep fine and the license itself is really expensive too. So really it's a way to muscle money out of clubs 'til they can't handle it anymore and they shut down as some have already.

DiS Only this week I received a UK music industry e-mail publicizing the fact that our government too is looking at a Licensing Bill that will interfere with live music and be as similarly proscriptive as your one.

T What the hell is all that about?

DiS Here, it's being referred to as a tax on entertainment where...

T Well I call it bullshit!

DiS It hasn't become law yet, but it looks like things will be getting tough over here too.

DiS It's pathetic, isn't it.

T Why would they want to attack the arts like that? Did you ever see that movie, 'Footloose'?

T You should see it. Kevin Bacon. It's an old school movie from '84. It's basically the same thing - he moves to a town where no-one is allowed to dance.

T And I guess that's why there are so many dance bands coming around right now. It's a reaction against the restrictions.

DiS From a more serious angle, I know there was a level of debate within the band in between 'Gotham!' being recorded and released some year and a half after because of everything that happened in New York City in between. Have you received any criticism for speaking out against the now international hero Giuliani?

T Uh, no, no. And we would stand by everything we said anyway, but no we haven't received any flack for it.

DiS Have there been any improvements in the Cabaret Law situation since then or maybe political minds have been engaged elsewhere?

T No, the new guy in there, Michael Bloomberg, is cracking down just as much.

DiS Although changes to your artwork and songs were discussed post 9/11, you chose to let everything stand, unlike The Strokes who pulled 'New York City Cops' from the US version of their album. I felt sorry they did that because basically, we all want a society where it is safe enough to take the piss out of the police and where things are not taken that seriously.

T Yeah, absolutely. My brother's a cop and I completely understand why they did that. At that time everything was trivial and I think they did that to not be in bad taste, you know what I mean? It was a tough decision to make, but....

DiS Um, were you in the city at the time?

T Yeah, sure, I was working in Manhattan, uh yeah.

DiS So you could see it?

T Oh yeah.... [uncomfortable pause] But I'd rather not really talk about it.

DiS It's okay, I shan't. I wasn't intending to. It was just something that came to mind. That's cool man, don't worry.

DiS [after a pause] Your city is so vibrant for music at the moment. It's a really exciting place. Are their any other NY bands taking the punk/funk ride the way you are?

T Yeah. I guess you'd say The Rapture, and Outhud, and !!! [pronounced "chg chg chg" I'm reliably informed,] as far as the dancier stuff goes, but then you have Interpol and The Yeah Yeah Yeahs. Oh, and LCD Sound System too.

DiS Did you choose DFA to focus the album's sound because you're both of like minds or did they just run off with it?

T Well, I guess it's a little bit of both really. We gave them the basic tracks and ideas, and they put their own twist to it and we were really happy with the outcome. Yeah, they're amazing and their James Murphy is the front man for LCD Soundsystem.

DiS Was it their idea to bring PJ O'Connor in for the extra percussion that you have on this second album?

T No. PJ had joined the band probably a year before that. He hadn't toured with us but he would do all our local shows and some out of state shows too. But no, we did 'Dance To The Underground' as an EP probably a year before 'Gotham!' came out and that's when he started playing with us. We had wanted a percussion player from the beginning and we just hooked up with him through a friend of ours.

DiS I particularly love the rhythm intro bit on 'Start A Fire'. It's just fantastic.

T Why thank you! He uses timbale, bongos and lots of things. You'll see it, yeah, he's amazing.

DiS Honestly, the Barfly in Cardiff is such a small little stage, you're gonna have trouble getting everybody and everything onto it.

DiS It has a wicked vibe and is my favorite club. It's in a cellar, and it's really nice.

T Cool. So are you gonna come down and hang out before the show?

So you want to know if Radio 4 can play it as well as they can talk it? Check back at the weekend to see what the DiS spies thought of their current UK tour.