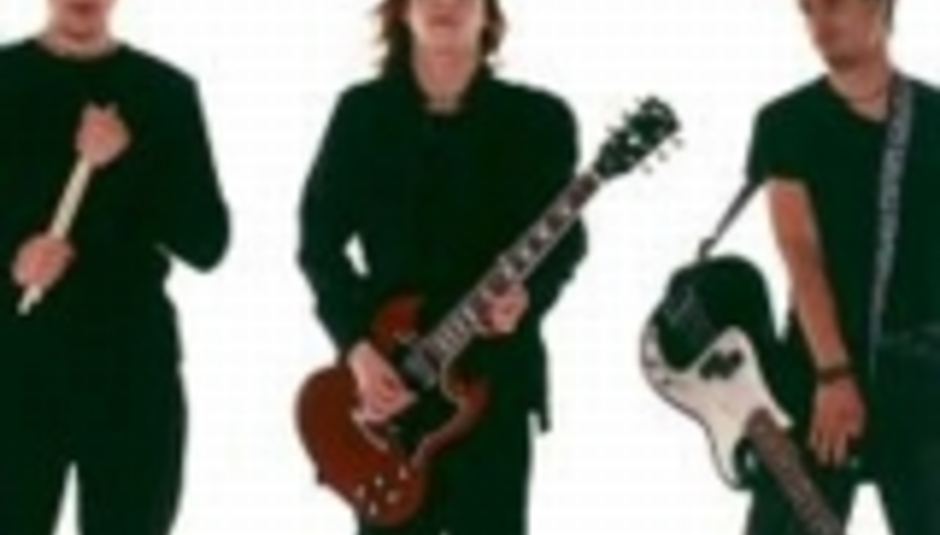 by Rebeckah Pearce November 20th, 2002
It’s 5am on a rainy Sunday morning and I am in a hotel bedroom introducing the wonders of the Magic Roundabout to Dave McPherson, lead singer and guitarist of new rock band, InMe. Dave is wide eyed with amazement at the small television screen depicting Dougal and friends on a “mushroom” hunt. “Is it me or are all the plants shaped like marijuana leaves?” he asks.

InMe have just finished a blazing set at the Tunbridge Wells Forum and now everyone have gone their separate ways to bed or to consume more alcohol. Dave is sitting opposite me nursing a tumbler of red wine and sifting through all the fan art he receives. Dave is both proud and scared of these items and it’s easy to see why. There are incredibly intricate pencil drawings of the band (“I always look like a girl when they draw me”) to bizarre paper plate montages (“where do they think up these things?”)

Dave McPherson, Joe Morgan and Simon Taylor have exploded onto the music scene with much gusto. They have had two singles that reached the top five most-requested videos on Kerrang! Television. They have supported Puddle of Mudd, Sugarcoma and SoiL and are now embarking on their own headline tour, plus they were nominated for Best New British Band at the recent Kerrang! Awards. All this and they haven’t even released an album yet.

Dave McPherson is a quiet guy when you first meet him. When interviewed there are lots of pauses in his answers and it soon becomes clear that he doesn’t like being put on the spot and talking about himself. Although, later on when we have had the chance to get to know each other a little better, Dave opens up and relaxes. He instigates questions and seems interested in other people and it occurs to me that he responds better to inquiries when on a conversational level. He has a maturity beyond his years but doesn’t come across jaded as he confides in me about his reaction to the large female fan base.

“I find it strange that when I come off stage, girls are asking me to sign their bras and it puts me on the spot. I wonder sometimes that maybe if we were an overweight, unattractive band that we would have quite the same fan base.”

But surely the music plays a large part?

“Of course, but it does lean the other way sometimes and that can be irritating.”

InMe have been playing together for years, both in a Tonka toys way and a musical one. They gigged under the name ‘Drowned’ and it was at one of these gigs that that Music for Nations A & R department spotted InMe as support and signed them immediately. Their influences range from Pink Floyd (Dave: “one of the best bands of all time.”), Led Zeppelin, Black Sabbath to more recent bands such as The Dillinger Escape Plan, At The Drive In and of course, the Foo Fighters. Joe Morgan, the bassist, in particular is a huge fan of Dave Grohl:

“In my ultimate festival line up I would make Dave Grohl play with Nirvana, the Foo Fighters and Queens of the Stone Age. I’d like to see him sweat, he earns enough money – he could take it.”

The band are enjoying their first stint headlining after so long as the supporting act. Simon Taylor, the drummer, in particular is very happy:

“It’s really weird being the headlining band but I’m not complaining. It’s a great feeling knowing everyone is here to see you.”

Are you sympathetic towards the support bands after doing it for so long yourselves?

“Definitely, not getting much of a sound-check and that sort of thing. We have had some great bands though as our opening act on this tour so far. It’s our last night with X is Loaded tonight – they have been great guys, and then Kinesis join us in Norwich.”

InMe have a very original sound, which is unusual in a band so young. Even during the sound-check it’s obvious this band has a huge talent. This is a time when you see a band in their rawest, most naked form and any small fault is highlighted. In this case, however, you get a fabulous taster of what’s to come. Dave’s vocals are mammoth compared to his slight frame and exceptionally distinctive.

“My voice just seemed to get louder over the years – I never pushed it too far. I don’t smoke either which is a large bonus.”

Simon is a very talented drummer with all the easy charm of an old friend. An approachable chap, it is easy to see why the fans swarm all over him. Simon takes time to answer all queries, sign everything thrown at him and basically stand around and have a bit of a natter.

“I miss my family when I am on tour but they are very supportive. It’s very hard being away from my girlfriend but she tries to come to as many shows as she can.”

When asked about his reaction to being nominated at the Kerrang! Awards for ‘Best New British Band’, Simon gushes:

“It was gobsmacking just being there and being nominated – that was an award in itself.”

Do you think that the Cooper Temple Clause deserved the award?

When I asked what would be the first extravagant thing they would buy in the future, the response was unusual for a trio of 19 year olds. Joe Morgan, the bassist, was particularly responsive and really thought about each question I asked, not because he might say the wrong thing, but so he gave honest answers:

“I would like to buy instruments and start my own recording studio. There are so many things I would love to do.”

Can you think of three things that you would like to do before you die?

“Oh God, that’s a hard one,” confesses Joe. “I would want to tell everyone everything I need to.”

“Travel the world, I guess, but the main thing would be to tell everyone how I feel about them.”

The live performance itself is incredible - over one hundred screaming kids, ranging from 10 years old to 20, all crushed against the front of the stage with their arms outstretched trying to grab something, anything. Nigel, the technician is onstage sweating profusely, due to the sauna-like atmosphere, using gaffa tape to stick down the microphones, the set list and assorted wires. “They’ll nick anything that you don’t stick down – little bastards.”

The screaming grows more frenzied and they are chanting only one thing: InMe. It is scarily akin to Beatle Mania although on a much smaller scale.

The songs themselves are punchy, emotional and well constructed. The two singles ‘Underdose’ and ‘Firefly’ provoke near hysteria and suicidal moshing. The security guards are clinging by their fingernails to keep the crowd back, their expressions pained as Joe whips his bass around like a dervish – narrowly missing bobbing heads. Its frenetic to say the least – three girls have already passed out and one has been taken backstage to be attended by a medic (or to cop a sweaty after-glimpse of the band).

If you are a true fan of electrifying rock and roll with a psychedelic edge then InMe are for you. Dave sings like an angel on steroids with nods to Jeff Buckley, Eddie Vedder and Tool, as his hands slide up and down his glistening guitar. It’s a small stage but Dave and Joe energetically charge and stamp their way through a blinding set as Simon ravages the drum kit with a passion.

This group of talented musicians are going to be huge, you can see it in their eyes, you can tell by the queues of fans not wanting to miss out, and you can recognise it from the music and the polished performance.

Go and see this band before they stop playing such intimate venues so, when they are touring larger and larger sites, you can brag that you were so close you could see the whites of their eyes.

Back in the hotel, after the gig, and Dave wonders aloud at the band’s meteoric success.

The Magic Roundabout theme tune starts up again for the fourth time and the television flickers. Dave finishes his wine and yawns: “Damn, this is such a strange programme.” Indeed, it is and it’s about to get stranger.