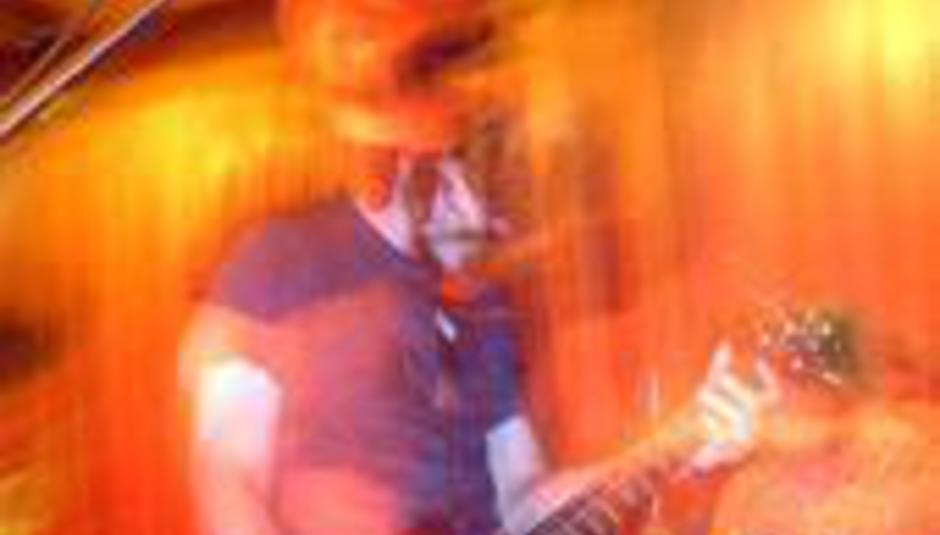 Let Our Enemies Beware took my ears like the Trojans in their not-too-obvious horse: in they crept and out they sprang, armed to the back teeth. The four-piece, from Medway, released their latest seven-track EP Dhu Rakina, all by themselves: this DIY ethic is commendable but hardly unique. What is, though, is the talent contained within the seven songs, which switch from twisted metal opuses to writhing post-rock operas. Think Faith No More, Shellac, Mogwai, The Locust… and then forget about them, immediately.

So impressed was I by the EP that I took a whole five minutes to pen some questions for the band. Pinging them their way over e-mail mainlines, I sat back and waited… and waited… and then…

Ping. Response: “Sorry about the delay dude, I went to ATP in Camber (so did we, where were you?) and I still haven't recovered,” it read, sent from ‘unkle b’. “Hope the Q&A isn't too wanky, the notes we made for them at the pub are mainly pornographic scribblings, so I rewrote stuff. Mart UpC said I should scan and send the originals.”

Please, unkle b, do that. But for now, here’s what we know about the blistering band that is Let Our Enemies Beware.

Who’s in the band, and what do they do, exactly?
We have Shar on main vocals and guitar; he's a wild-eyed half-Egyptian attention-deficit lunatic of sorts. He is responsible for most of the lyrics and excellent, spasmodic stage dancing. We have Little B on drums, he's the baby of the band at 18. He drums like a bastard and destroys most of our equipment at our shows. He has anger issues. We also have Boast on guitar; that's Little B's big brother. He is narcissistic and responsible for mainly low frequency guitar noiseage. Lastly we have Adam on third guitar, big riffs and snarly vocals (we have no bass). He is the new boy of the band, cutting his teeth with us in August this year although we have all known each other since we were nippers. When we are not playing music we like to divide our time fairly evenly between video games, masturbation and work. We do other things, but these are most important. Also, Adam plays bass for a heavy-as-you-like band called Carmen.

Dhu Rakina isn’t your first release, right? What came before it?
It's not our first recording no. When we first started it was just Boast and Shar on guitars and a drum machine. We messed about with different line-ups but eventually just settled on two guitars and Little B on drums. We recorded a seven-track demo, Sunburnt in November, under our old name of Army Of Juan. We didn't end up pushing it or trying to shop it around, we just put the whole thing on our website for free download and carried on. It's kind of rough but there are some good songs on there. ‘(Personal) Space Invaders’ (which features on Dhu Rakina) was re-worked from that original EP and we may yet re-work some others, but we have too much other shit to work on at the ‘mo.

Is Dhu Rakina a fully self-financed release? Are you shopping it around to labels at all, or do you enjoy the hardest of hard graft?
Yar, it's fully self-financed; we pulled favours, scratched backs, twiddled knobs, begged and borrowed. As it was a budget dealio we recorded everything and mixed it in two days, all the music was put down on the first day and the vocals/mixing the second. We have had a couple of labels interested in the last month or two and it looks promising, but we're rubbish at that sort of thing. For now we want to gig everywhere and as much as possible.

And is the entire package, from the recordings to the artwork, handled by band members? The EP and website have a very strong design…
Yeah we handled artwork, etc. We came up with an idea together and Boast designed and illustrated it. Over the past couple of months we have endured much 'help', guidance and sambuca from our erstwhile spiritual guru and life manager, John Amino (from the Amino People, Fence Records). He actually plays a mean harmonica at the end of the EP along with some added noise from Chris Garth, guitarist with our fellow Medway noisemakers UpC DownC.

What sort of comparisons have you attracted in the past?
So far people have been very vague with comparisons, which is fine with us. We tend to play whatever we feel like anyway, and we like lots of stuff. We like to sound like a full band, we like it loud and we want our music to have balls. Ho ho. This can be tricky without bass so we swap noise/rhythm guitar parts between us constantly. We're suckers for a good hook and like our pop music. Nice.

Where would you pigeonhole yourselves, if pushed? What’s this post-core that’s mentioned on the website?
I suppose we would say we are a rock band, it's what we grew up on anyway and it has the right feel for what we do. Actually ‘post-core’ as a name means nothing at all, it's a kind of reaction against the need to label. Everything seems to be alt-something, post-something or something-core. Boast and John Amino run Post-Core nights (with much help) down here in the bowels of Kent – they just invite bands they like down and put on great shows, from heavier acts to spazzed electronica.

Does 2006 hold anything in particular in store for the band?
2006, yar bloody hell it's almost here isn't it? Well, playing all over London, working real hard at it, and then perhaps landing a sweet record deal. Developing heroin addictions, maybe some rehab. Adam wants to nail a supermodel. Also, we should be recording another EP before the summer. If you are a promoter who wants a venue sonically torn to the floor, then get in contact. Whoop whoop, thanks for having us.

Let Our Enemies Beware can be contacted via their website, and music can be heard at their Myspace page. Everyone’s got one, y’know.