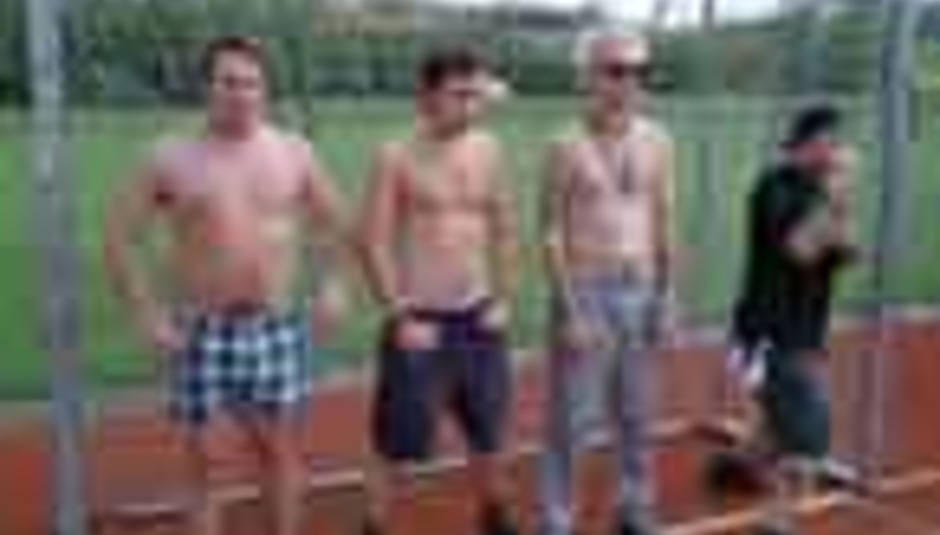 by Mat Hocking August 10th, 2002
Having just returned to Europe from a mammoth US tour with Bombshell Rocks and jumping straight into a European tour with anarchist punkers Anti-Flag and Germany’s Donots I finally get the opportunity to collar a Millencolin, guitarist Matthias, to find how they’ve progressed as a band since their inception in ’92, the difficulty of retaining their punk ethics and where they see themselves heading in the future. All four members of Millencolin grew up in Orebro, home to Euro-punk powerhouse Burning Heart Records and 130,000 Swedes, making it the 5th biggest city in Sweden. Although in 2002 the city’s punk rock and skate scene has flourished, helped in no small part by Millencolin’s rabid following, travel back 15-20 years and you’re more likely to find members of Millencolin focussing on their skateboarding moves than listening to punk rock.

“When we were growing up we weren’t into music at all. We would listen to all kinds of American punk rock like Misfits, Bad Religion, Dead Kennedys and all that stuff but the scene in Sweden at that time, I didn’t know much about it. But then our friends from skateboarding had their own bands so me and Nikola wanted to have our own band just because everyone else had one.”

Matthias and Nikola started playing music in 11th grade aged 17. They formed a band around the same time, allocating instruments to each other with Matthias originally playing drums. He admits now that “when we started off we couldn’t play at all”, but after five years solid practise they aroused interest from a new independent record label Burning Heart.

“It was only Peter that owned and worked at BHR. He released a No Fun At All and Refused single and then he released us but we’ve been growing with him since the start. I mean, he was really small when we released our first album and it’s great because it’s probably the biggest independent label in Europe now.”

And with an impressive 1.5 million units sold worldwide prior to the release of their latest fist-pumping full-length ‘Home From Home’ Millencolin have also experienced their fair share of fame, particularly in Sweden, where it seems every music show, magazine and promoter wants a piece of them. In fact it was this media frenzy around the time of the mid-90s punk explosion that prompted them to tell Epitaph that they never wanted to be on MTV.

“It was a phase we had because we got really big in Sweden and we’d only played Sweden for like, two years and it got a little bit too much. I mean, we were everywhere so we felt that maybe it wasn’t… It’s better sometimes to tour a lot and build a steady fanbase. Sometimes [bands] just pop up and get huge and they don’t really have a fanbase at all because it’s like people listen to it but then maybe some other band gets big and all their crowd starts listening to that band. Now, I don’t mind being on MTV because there’s so much shitty music on MTV so why not have some good music.”

What would you say to people who don’t like the band because you’re on MTV?

“Grow up. I don’t really care that much about that any more.”

Would you view it as taking punk a bit too militantly?

“Yeah, I mean punk’s all about ‘make your own decisions’; do whatever you wanna do and there’s no rules.”

Punk rock’s encumbering fanbase ensures that any band who dares to shelter under the punk rock umbrella can expect constant surveillance from the scene police. Those who attract a crowd not adhering to the scene’s code of practise must be doing something wrong and as larger venues started to fill up many of the old skool crowd began to disappear. Some members of Millencolin have expressed in interviews their disappointment at the lack of big circle pits at shows in recent years, and that popularity brings with it a younger, tamer audience - something Matthias looks at in a different light.

“I didn’t say that!” Laughs Matthias. “And I don’t really agree with it because when you get bigger as a band, I mean, you always have the true punk rockers that always listen to punk rock. When you get bigger maybe some people outside that scene that maybe listen to pop music start listening to you. And I don’t care. I don’t care whether they’re 12 year old girls or 25 year old whatever, I don’t care. Because sometimes it becomes a trend and they don’t really know why they’re listening to it but if they like it because it’s good music and they like what we’re doing then I’m happy.”

Do you ever miss playing smaller venues?

“It depends, I mean, sometimes it really sucks playing in a smaller venue when it’s a lot of people and there’s always these people that want to go onstage and sing in microphones and shit. And that’s fine in a way but it’s also really hard to perform and play our songs. Nikola plays bass and sings and he gets the microphone in his mouth all the time and it sucks. I don’t really care. Sometimes it’s great playing smaller venues sometimes it sucks. For me, if it’s a good crowd and I’m having a great time onstage it doesn’t matter where I’m playing.”

Having played in Millencolin for the past ten years Matthias has, along with the rest of the band, progressed from the spotty, young punk rock skater into a fully-fledged grown-up, with a family, house and a more liberal view of what punk’s all about. Although they still have time for skating, having contributed a sum of money to the construction of an indoor skatepark in Orebro two years ago. However, ask Matthias about how his taste in music has grown and he’ll profess his growing love for pop and death metal, genres of which many a punker would rather be stoned in the street by nu-metal fans than be seen listening to.

“My taste in music as changed a lot actually. When we started the band it was really important for us to listen to punk rock, that was all we listened to.”

Did you feel you weren’t allowed to listen to anything else?

“Maybe. It was a statement too, like we’re punk rockers, we listen to punk rock. But nowadays when you write music you have to be open-minded. It’s pretty boring to just listen to punk rock and it’s hard to get inspiration to write songs too. I listen to a lot of different kinds of music and just because I like punk rock it’s not everything that I have to do.”

Would you ever consider forming a side-project to Millencolin focussing on a completely different style of music?

“Not completely different style of music but yeah, sure. Maybe some more rock or something like that, I dunno. Maybe, because there’s always songs you have that never become Millencolin songs. Nowadays we tour a lot and when I have time off I really don’t wanna… I have a recording studio too so I work there and there’s a lot of music so it’s nice when you have time off not to deal with music at all.”

Matthias’ Soundlab Studios is where he records a lot of other bands for Burning Heart, including two albums for their stand-in drummer’s band Bombshell Rocks. Would this be something he’d want to pursue full time if the band decided to call it a day?

“The funny thing is we started this band after we finished school and we never really had plans for the band at all – it just happened. I never worked in my life at all but if we quit now as a band I would probably work in my studio recording bands and that kinda stuff.”

Millencolin’s 5th studio album ‘Home From Home’, recorded by veteran punk producer Lou Giordano, is out now on Burning Heart Records. Also, for a limited time only you can order your very own pair of Vans Millencolin shoes. For more details click on this link.