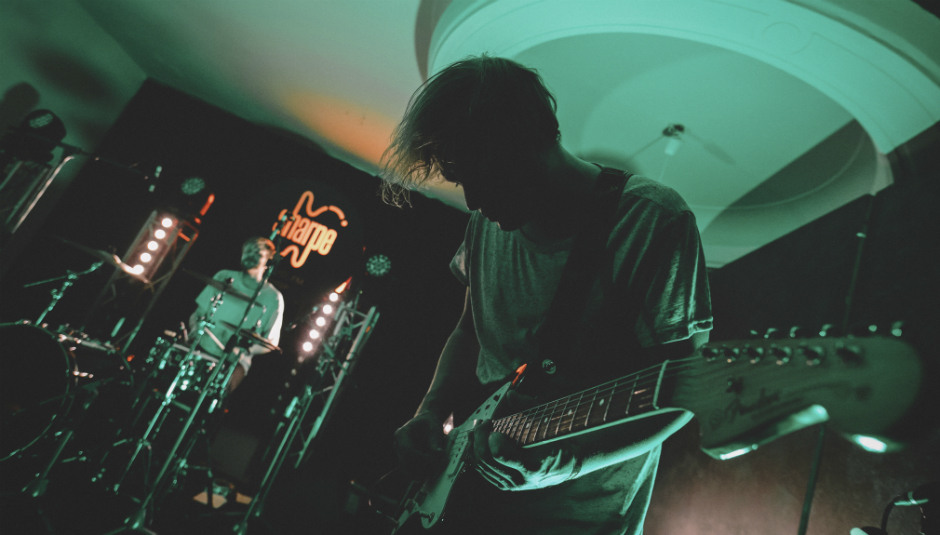 Amidst the many panels and workshops at Bratislava’s Sharpe Festival, one stood out. Titled “Good-hearted Promotion or Downright Spam”, it looked at the role of PR in the digital age and how artists – and, indeed, labels and journalists – could benefit from the services of a seasoned professional. A key issue for many in attendance was how to break through online noise, and how to achieve traction – and exposure – beyond their own borders. There is, of course, no easy answer. “Be truthful in your art and your message,” says Poland’s Gabriela Szuba, a promoter and booking manager. “Work hard…and be good!” adds Richard Foster, PR manager at Rotterdam’s WORM and acclaimed journalist, a somewhat self-evident exhortation but one that rings true.

And yet the sad reality is that for many bands – not just the ones performing here – neither of those things are guarantees of success. Nothing is. Sharpe draws the majority of its artists from Eastern and Central Europe but despite the talent on show – and we witness some incredible sets – a viable, sustainable career in music seems to be an almost impossible dream for many; virtually everyone we talk to has a day job or side hustle to pay the bills. One can’t shake the feeling that if some of these acts hailed from Hackney or Williamsburg they’d have a fighting chance but when you’re from, say, Ljubljana or Kiev, an indifferent shrug from the West is a more likely reaction (unsurprisingly, only two UK publications have bothered to make the trip). 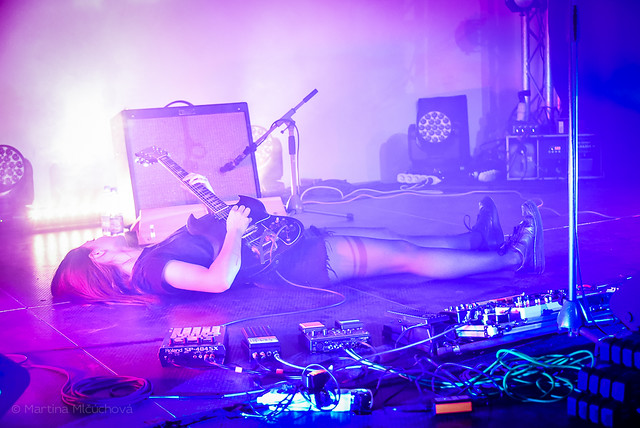 It’s a shame as most of the artists playing are significantly better than the trust fund kids and cool haircut brigade that clog up many Ones To Watch and Hot Lists in the UK. Inventive too, with Ukrainian duo Ptakh_Jung being a case in point. Their dark swirls of noise blend elements of post-rock, electronica, and ambient soundscapes, and are backed by arresting, futuristic visuals. It’s all very cinematic and dystopian – a bit Aphex-Twin-meets-Ennio-Morricone – and the sensory overload they conjure is impressive. More than anything, you get the sense they’ve thought deeply about their music and what they want to convey; the slow build tension and intricate layers sound like the fruits of countless hours spent honing and tweaking.

Slovakia’s own Möbius are another band whose music literally demands attention. Their instrumental doom/stoner sludge hybrid rock is Sun O))) levels of loud, and extremely heavy; just like Stephen O’Malley, the guitarist employs huge amounts of low end and reverb to create great slabs of noise that shake you to your very bones. “Evokes images of huge caverns slowly collapsing around you,” says one comment on their Bandcamp page, an apt description for a band playing songs called ‘Eternal Weeping In Agonies’ and ‘All Who Drink From The Abyss Experience Complete Oblivion’. And while there is an enveloping, crushing quality to the sound, a sonic death grip that draws you in gradually to its colossal embrace, there’s also some groove buried in the murk; not for them endless repetition or noise for it’s own sake. 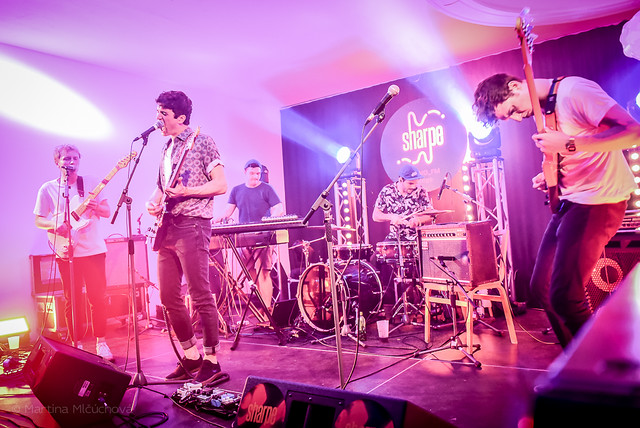 Market, a five-piece hailing from Prague, have pursued the cerebral route, blending a dizzying array of styles and motifs into something that could be labelled improvisational jazz indie. Elements of rock, hip hop, Zappa and Beefheart stick out, while the vocals recall King Krule’s woozy, stream-of-consciousness thoughts on love and romance. It’s an intoxicating brew, with enough solid ideas to make the more outré moments – the quintet frequently swap instruments; some songs stop and start inexplicably – seem more like avant-garde exuberance than fatal flaws. It’s refreshing at least to see a band dare to fail with some big ideas and the chops to execute them, rather than simply adding the odd flourish to standard indie fare and thinking they’re clever.

That being said, there are also plenty of bands at Sharpe following more traditional paths and doing a mighty fine job of it. Austrian duo MOLLY walk the line between shoegaze and dreamy, ambient pop, effortless switching between soaring, sky-high guitars and quiet grace. “Glittering” is a good way to describe their music; some of their riffs positively shimmer, while even the noisier moments are done with subtlety and beauty. Melby, from Sweden, deal in breezier fare, their airy, semi-psychedelic folk-pop an enchanting way of opening proceedings on the Friday night. They run through most of their debut record, None of this makes me worry, and it’s easy to see why various blogs have been charmed by the Stockholm-based quartet. 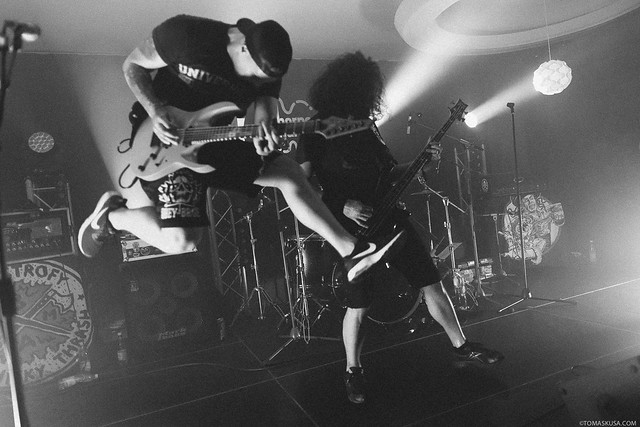 Question is, what comes next? How do indie bands like this evolve their sound and get bigger and better without losing whatever it was that made them noteworthy to begin with? Slovenia’s Koala Voice are a band who’ve wrestled with precisely this conundrum. Three albums in, their carefree indie pop sounds a little grittier, a little rougher around the edges. There’s a punkier, more boisterous attitude to their work now, but it suits them; the new material sounds like a band freed from the constraints of trying to second guess what might be successful and just having a blast.

Such a description could also be applied to Bristol’s SCALPING, who deliver a pulverising late-night Friday set and look like they love every minute of mayhem they serve up. Ostensibly a live techno-punk band, they’ve also been pegged as being “challengingly innovative”. Certainly, there’s nothing standard about their screaming techno, squelching bass, and post-rock time signatures; throw in some math rock swagger and you’ve got apocalyptic and insanely catchy bangers that sound like Factory Floor trying out blackened post-punk. It’s intense and mesmerizing in equal measure, and helped along by arresting, Blade Runner-style visuals projected onto the backdrop. 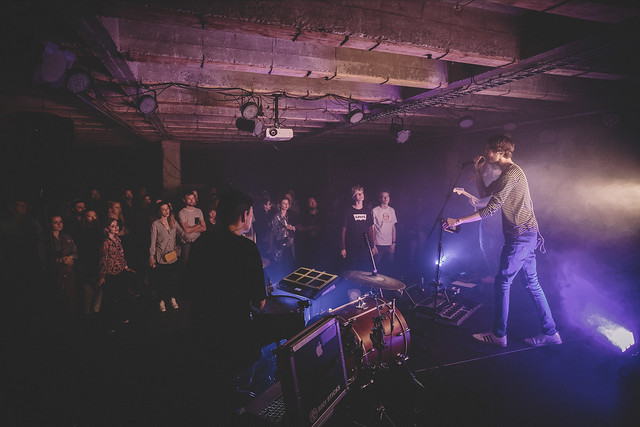 Tucked away in a side room – officially designated as The Library – one can discover a quieter side of Sharpe. Sponsored by Sofar Sounds, a series of special guests play short acoustic sets to a seated audience; the hook is the artists are not announced in advance. However, we’re lucky enough to be tipped off that local heroes The Ills – a band we’ve been championing for a number of years now - will be performing, so we nab a front-row seat early for this rare event.

Their soaring post-rock soundscapes translate surprisingly well to acoustic guitars, the power of their riffs replaced by delicacy and nimbleness. Songs still have a euphoric quality, but the melodies – and the sheer prettiness – of some of the guitar lines really stand out. If someone was unfamiliar with their work, they’d be hard pushed to guess that this was not their normal modus operandi – they really are that good. A highlight is ‘I Am My Own Weakness, Darling’, taken from recent record Disco Volante / Mt. Average – aided on vocals by another local, Dominik Prok of 52 Hertz Whale, it’s a dark, brooding tale, Prok stalking through the audience, singing a capella. 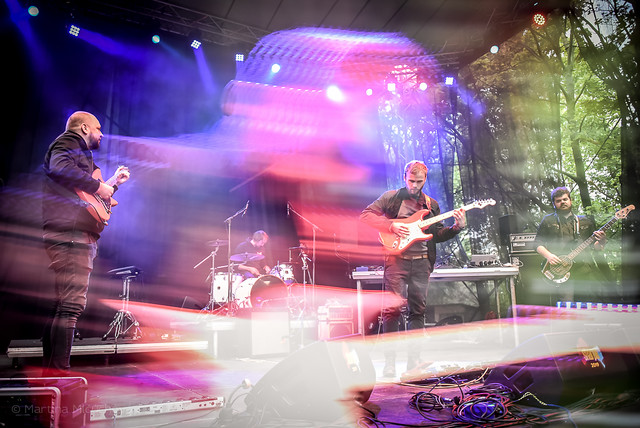 It’s a poised, serene twenty-minutes, and a lesson for anyone reluctant to step outside their comfort zone. It’s also one of the best sets we witness all weekend, topped only by another band we’ve championed before, Rotterdam’s The Sweet Release Of Death. Late on Saturday they deliver a taut, fizzing thirty-minute blast that’s as powerful and energetic as anything we witness. ‘Post Everything’ highlights everything that makes them great; earworm riffs, spacious, sky-high arpeggios, and motorik drums defiantly build into a swirling crescendo that cuts out just as it threatens to spin out of control; one part noise-pop, two parts post-punk.

New track ‘Sway’, taken from their forthcoming record, is precisely the sort of anthem that needs to be experienced ear-bleedingly loud, a shattering song that nonetheless has an infectious groove buried amid the maelstrom. And through all this there’s vocalist and bassist Alicia Breton Ferrer, a stoic, deadpan presence, the calm amid the storm. It’s as tight as I’ve seen them; not a moment or note is wasted, their whip-smart new material sounding lean and streamlined. 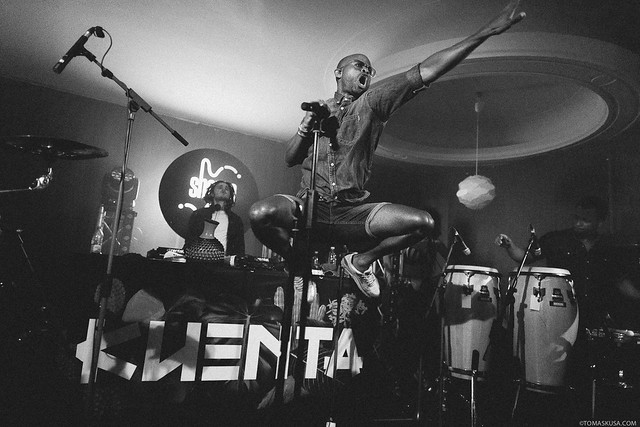 As with many of the artists playing here, they deserve wider acclaim than they’ll probably get – certainly, they’re every bit the equal of those in the UK riding the coattails of punk rock’s surge in popularity. They wouldn’t be out of place halfway up the bill at All Points East say, or Primavera Sound – as for some of the nonsense hyped here, well, it makes you wonder why such bands bother. Sharpe is an event that aims to redress this balance, and after two editions, its ethos and credentials are beyond reproach – they really do know their music out here. The hope is that more and more people – and the industry at large – will start paying attention and cast their ears eastwards, for if it’s quality they’re after, rich rewards await.

Sharpe Festival takes place in Bratislava, Slovakia, at the end of April. For more information about the festival, including dates and tickets for the 2020 edition, please visit their official website.

All Other Photos: Credit As Indicated

A Different Kind Of Weird: dEUS on Th...