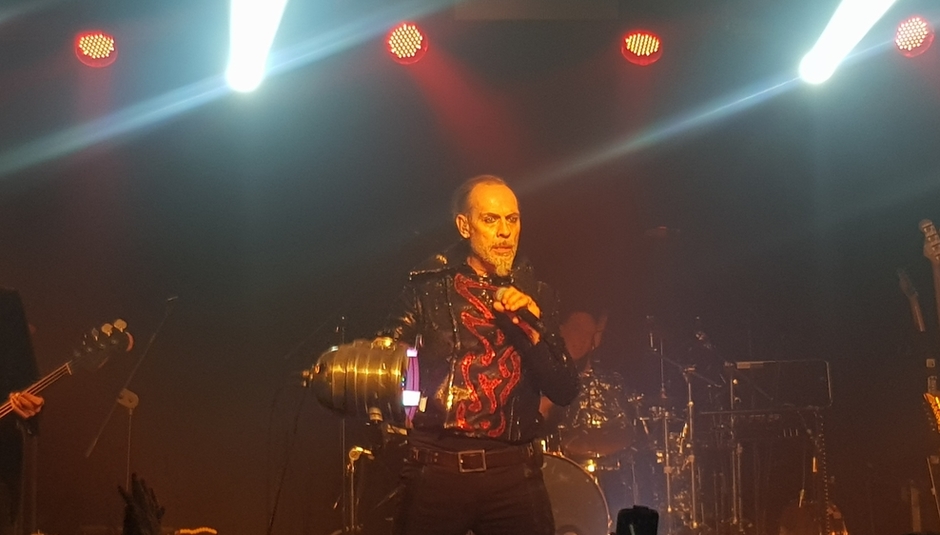 Forty years ago in the town of Northampton, four young men penned a nine-minute-long ode to an American actor of Hungarian descent and the genre known as "goth" was born. So it shouldn't come as too much of a surprise that this fortieth birthday hometown celebration of that song's creators sold out in minutes.

If you were a child in the 80s you'll probably be aware of Bauhaus as the band that introduced you to the world of Ziggy Stardust. Their 1982 cover of David Bowie remains their biggest hit single, while the band's explosive performance on the much-missed Top Of The Pops that autumn still lives long in the memory. All dressed in black apart from topless singer Peter Murphy, who had cheekbones to die for, they were the archetypal band every twelve-year-old wanted to be in when they grew up.

Post-punk in every sense of the words, Bauhaus were anything but mohawk sporting seaside postcard poseurs. Instead their influences were Bowie, The Velvet Underground, Iggy Pop and dub reggae. They had to create a genre for themselves because there was simply nothing else like them at the time. Or indeed, since.

What makes the Bauhaus story more fascinating was the band's shock break up at the height of their commercial success. Having released a number of critically acclaimed singles and a top ten album in The Sky's Gone Out, arenas beckoned yet the band decided otherwise, calling it a day only a week before fourth LP Burning From The Inside hit the shops in the summer of 1983. While they briefly reformed in 2005 and released a brand new album (Go Away White) three years later, the reunion was over, the band once again citing musical and personal differences.

Bearing in mind all of the above, tonight's celebration only involves 50% of Bauhaus in singer Peter Murphy and bass player David J (Haskins). Nevertheless, guitarist Mark Thwaite and drummer Marc Slutsky, both long time players with Murphy in his solo guise, more than make up for the absent Daniel Ash and Kevin Haskins.

Before the main event, Thomas Truax brings a touch of wowtown thanks to his congenial and experimental take on electronica and folk, while London based trio Desert Mountain Tribe also blow the cobwebs away with an impressive forty-minute set that delivers psychedelic rock in a manner designed to entertain stadiums.

Having already completed the European leg of the tour - not without a couple of cancellations due to Murphy contracting a bout of laryngitis from food poisoning earlier in the week - omens for the UK leg still looked promising. Reports from those shows had been positive, not only regarding the charismatic frontman's vocal performances but also the band kicking up a riotous storm every night too.

Each night the setlist has been split into two parts - the first offering a chronological run-through 1980's debut album In The Flat Field, followed by an ever changing second part dubbed "Bauhaus classics" containing various singles and album tracks as well as the odd rarity. Early on when a punter shouts for 'The Sanity Assassin', a posthumous single released after the band first called it a day in 1983, Murphy instructs the crowd to shout for more requests, saying there's every chance we will play them.

From the submarine depth charge that introduces opener 'Double Dare', a claustrophobic slice of angst-ridden post-punk, to the dissonant mantra "Nerves like nylon, nerves like steel" at the heart of ...Flat Field closer 'Nerves', Murphy and co. turn back the clock with stylistic aplomb.

The second part of the set becomes very Burning From The Inside heavy, which is no bad thing as 'King Volcano' and 'Kingdom's Coming' set the scene for the title track and extended dub version of 'She's In Parties', split only by a rousing 'Silent Hedges' before the unmistakable intro to 'Bela Lugosi's Dead' gives way to nine minutes of bliss. It's still one of the most unique pieces of music ever committed to tape, Murphy ever the showman as his third costume change of the evening suggests.

'Adrenaline', the only song played from the band's reformation period is a surprise but welcome inclusion before 'Dark Entries' brings the second half to a climactic finale. Returning only for a brief run through the aforementioned 'Ziggy Stardust' and T-Rex's 'Telegram Sam', another cover that ended up as one of Bauhaus' most loved 45s, it goes without saying their legacy won't be forgotten. A majestic return to once familiar territories for messrs Murphy and J, and one that will be repeated all over again next weekend. Welcome home.

Bauhaus are currently on tour throughout the UK. For information about the dates, and to by tickets, please click here.

How The World Sounds: The Future Of R...