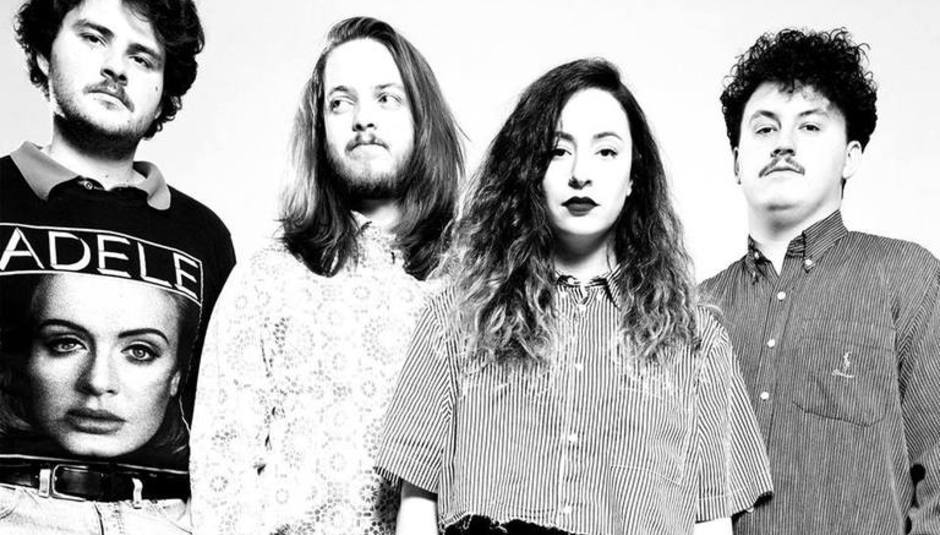 As 2018 draws to a close, it's time to not only look back at what's been another great year for records in the shoegaze, noise, and dreampop worlds. But also gaze ahead to what 2019 has in store.

With new releases on the way from Swervedriver, Amusement Parks On Fire and Lorelle Meets The Obsolete among others, there's already plenty to look forward to in the months ahead.

So without further ado, here are 25 artists who've got us pretty excited of late.

We've been excited by this Cardiff based five-piece ever since seeing them play the Rising stage at Green Man in August. 'Fields' is taken from a split EP released on the Bubblewrap Collective last month which also features Zac White. Echoes of Slowdive shine through this shimmering piece, which sets things up nicely for next year's debut long player.

An indie supergroup of sorts, Piroshka features former Lush vocalist Miki Berenyi, KJ McKillop who played guitar in Moose, one time Modern English bass player Mick Conroy, and ex-Spitfire and Elastica drummer Justin Welch. Their self-titled debut is out in February on Bella Union and this is the first single taken from the album, 'Everlastingly Yours'.

London duo Black Doldrums have been compared to a number of artists from Phil Spector and Black Rebel Motorcycle Club to Taste era Telescopes and Spacemen 3. Recently signed to Club AC30, 'There Is No Eye' is taken off their forthcoming EP Sad Paradise which comes out on the 30th of this month.

There's some great music coming out of Canada at the moment and Basement Revolver are among those responsible. Hailing from Hamilton, Ontario, the trio have made one of the albums of 2018 in Heavy Eyes which came out on the Fear Of Missing Out label last month. Chisy Hurn's vocal sits somewhere between that of Mazzy Star's Hope Sandoval and Molly Rankin from Alvvays, providing the perfect accompaniment to her band's hazy melodies.

One of this year's finest if slightly understated comebacks was that of The Longcut. Arrows, their first album for nine years, bore all the hallmarks of their classic sound while pushing boundaries as the band constantly strive to reinvent themselves. 'Popic' is one of the standout tracks on the record and here, James Chapman from fellow Manchester outfit Maps has given it a dreamy makeover for their current single which came out earlier this month.

Parisian outfit Steeple Remove have been around for over two decades now, having initially formed back in 1997. With a sound indebted to bands like Can, Neu! and Stereolab they've amassed a devoted following within the shoegaze and psych rock communities. Which bodes well for the band's forthcoming fifth album Vonal-Axis, out later this month on Fuzz Club.

With a sound that recalls both the halcyon era of Creation Records and modern day acts like Beach House, Soft Science have managed to achieve the best of both worlds. Hailing from Sacramento Valley, this five-piece have been around a while, honing their sound from 2011's debut High And Lows through to third long player Maps, which came out earlier this year on Test Pattern Records.

Linn Frøkedal and Richard Myklebust are probably better known for their work in The Megaphonic Thrift, but the duo's other project Misty Coast is just as potent. Their as-yet-untitled second album is scheduled to come out next year, and 'Eleven Months' is the first single to be taken from the new record.

Also from Canada are Dumb Angel, essentially the brainchild of singer-songwriter Shaun Mason. The Saskatoon-based outfit have been compared to Spiritualized, Mojave 3 and The Velvet Underground which is no mean feat. Currently touring the UK as we speak, debut album Broken Glass came out earlier this month and is one of 2018's largely undiscovered gems.

Patrick Fitzgerald is probably better known for his work in Kitchens Of Distinction, still widely regarded as one of the most innovative bands from the early nineties. Oskar's Drum is his latest project with Yves Altana, who also plays in Chameleons Vox, and Degenerate Art bears the first fruits of their labours. Released last month on Ragoora Records, we strongly advise you check it out.

Kid Kin is the solo project of Oxford-based musician and producer Peter Lloyd. Influenced by the likes of Mogwai, Jon Hopkins, Sigur Ros, and Four Tet, this self-titled EP follows on from last year's 'Masterclash' single and represents arguably his best work yet. Comprised of four tracks, this is lead track 'Jarmo', recorded live at Witney Studios earlier this year.

After last year's long-awaited comeback, Amusement Parks On Fire have been busily beavering away planning the next instalment of their return. 'No Fission' is the first single to be released off forthcoming long player An Archaea and it's every bit as enticingly brilliant as we've come to expect from these guys.

We're a little late to the party for Just Mustard's excellent debut Wednesday which came out in May. However, as the saying goes, it's better to arrive late than not at all, and the Dundalk based five-piece have delivered one of 2018's finest albums here. Echoes of bands like Cranes or Cocteau Twins shine through, particularly in Katie Ball's angelic vocal which provides a subtle foil for the wall of noise that surrounds her.

Essentially the brainchild of Camella Agabalyan, Cosmic Strip are among the newest kids on London's musical block and possibly the most interesting we've come across in months. Debut EP Heavenly came out in August and reminds us of Beach House, Lush and Alvvays. Which is never a bad thing.

The solo project of Argentinian musician Paula Garcia. Sobrenadar has been creating luscious, ambient soundscapes since 2006. Inspired by the likes of Air, Engineers, and Boards Of Canada, her latest album y came out in September on esteemed independent Sonic Cathedral and is well worth a listen if tranquil, reverb-laden dreampop is your bag.

Hailing from Cologne, Holygram make the kind of dark, industrial, shoegaze-tinged post-punk often associated with more left-leaning acts from their homeland. Although only active since 2015, the five-piece have already established themselves as one of the revered bands on the German underground circuit, and earlier this month, released long-awaited first LP Modern Cults, which doesn't disappoint in any way.

Although best known for their output on Creation Records in the early 1990s, Swervedriver have embarked on a new chapter. Earlier this year they signed to Rock Action and in January put out their eagerly anticipated sixth album Future Ruins. 'Mary Winter' is the first single to be released from the new record and represents one of their most captivating pieces of music for many a year.

One of the most innovative bands to emerge from the UK's psych rock scene this past decade. Carlisle outfit The Lucid Dream released their fourth album Actualisation last month. Their most bold statement of intent to date, it's an album constructed more for the dancefloor than the rehearsal room, taking inspiration from acid house and minimalist techno as much as anything else.

Chilean duo The Holydrug Couple have been regulars on the psychedelic festival circuit for a while now. So it's probably just as well their long-awaited third album Hyper Super Mega is finally with us three years after its predecessor Moonlust. Released on Sacred Bones, it's a record that devours influences from all genres and eras while reaffirming its creators as one of the most inventive acts around.

Initially the solo guise of Hull musician Ryan Smith, BDRMM eventually became a five-piece and have already put out a couple of well-received limited edition singles in 'Kare' and 'The Way I Want'. Newly signed to the Permanent Creeps label, 'C.U.' is their finest four-and-a-half minutes to date, recalling the likes of Pale Saints, Diiv, and Wild Nothing with its opulent beauty.

While the Kikagaku Moyo live experience has long been a sight to behold, their recorded output keeps getting better with time too. Masana Temples is their fourth album and first since the majority of the band relocated from Tokyo to Amsterdam and more remote parts of Japan respectively. Forsaking none of the experimental beauty of its predecessors, the record takes yet another excursion into the unknown, fusing elements of jazz and traditional folk alongside their trademark wall of psychedelic noise.

Lorelle Meets The Obsolete have been one of Mexico's most exciting musical exports in recent years, so we're excited to announce the duo's fifth album De Facto will be with us in the early part of 2019. Scheduled for release on 11th January through Sonic Cathedral, it also promises to be their most experimental offering to date if the title track is anything to go by.

We're back in Canada once more, this time with Toronto based four-piece Tallies. Their self-titled debut comes out in January on Fear Of Missing Out and is already hotly tipped to feature in many of 2019's end of year Best Of lists. Clearly indebted to a lot of UK guitar bands from the 1980s and early nineties, Tallies bares all the hallmarks of indie pop's golden era as Sarah Cogan's vocal brings back memories of Liz Fraser and Harriet Wheeler.

Formed in Southampton five years ago, Burning House have gradually established themselves as one of the most exciting bands in the UK. The trio's live sets are the stuff of legend around the south coast of England, and recent singles 'Mirror Song' and 'Peach' have received airplay on BBC 6 Music. With debut album Anthropocene scheduled for release in the early part of next year, 2019 might just be theirs for the taking.

Norwegian musician Hilma Nikolaisen has something of a distinguished background, having cut her teeth playing bass in esteemed shoegaze outfit Serena Maneesh alongside brother Emil on drums. He also contributes on Mjusic along with another sibling Ivar, himself better known for his work with Kvelertak. Together they've conjured up a worthy successor to 2016's debut Puzzler, from which 'Only Me' is the brand new single.

"Everybody wants to be a rap star the...

There's A Ghost In My House: DiS Talk...