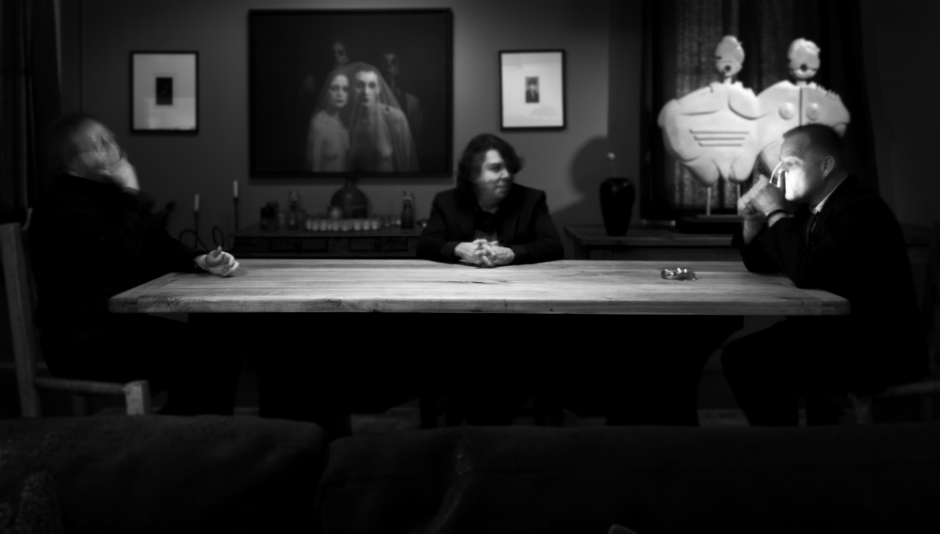 Earlier this year, in a quiet and unassuming way, The Summer Kills released one of the finest albums of the year, the gorgeous Last Night We Became Swans. If you heard it, congratulations. The combination of Hammock and Matthew Ryan makes something much more than the sum of the constituent parts, a prolific ambient powerhouse and a sharp singer-songwriter. This is the kind of album that should be on every end of year Best Of list, but probably won't be. There's no justice.

As the nights drew in, the album took on a new lease of life for me and so it seemed like the perfect time to check in with Hammock and explore this wonderful piece of work, as well as seeking to draw your attention to it again (or for the first time). With Hammock's new album, Universalis also fast approaching (it's out 7 December), what better time to pull up a chair, put on your best headphones, and dive in?

DiS: What made you want to do this project? After all both Matthew Ryan and Hammock are in the midst of individually successful seams of creativity at the moment.

Hammock: I’ve spent many nights alone with Matthew Ryan’s music and words. The immediacy, the heartbreak, the beauty, the tragedy… It’s all in there… the whole catastrophe. The tension between light and shade and the holding of that tension is what makes great art. We always hear from people that our music makes them feel both sadness and joy… so given our admiration of Ryan’s music and the nature of what we create, it made sense for us to work together. It also gets monotonous sometimes when we only work on our music. We like a good challenge to keep things interesting.

How did you guys meet? What drew you together? When did you know this was going to work?

I believe we reached out first and luckily Ryan was a big fan of ours as well. After completing the song ‘Like New Year’s Day’ we knew the chemistry was undeniable. After that, the writing and recording began to flow quickly, in an almost effortless sort of way.

Seven years is a long time to take over making an album. Naturally, things have turned out amazingly, but what took you so long?

We didn’t work on the record for seven consecutive years…We struggled with the mixing and mastering and after a while, we decided to take a break and let it sit for a while. Ryan moved away and he worked on his career and we worked on ours. Basically, life happened and we each went through our own type of personal purification. After we worked with Peter Katis on some Hammock records, we reached out to Ryan to see if he’d be cool with Peter having a go at the mixes. We knew that Peter’s sensibilities would be a good fit for this record. Ryan was cool with it and so here we are.

This is a lot more than Hammock plus vocals, or a more direct version of the band, but it maintains and develops upon much of the band’s intrinsic beauty. Did you feel released by the addition of a lead vocalist and some more ‘popular’ song structures?

I don’t think we were interested in just doing another Hammock record with lyrics and a singer. Andrew and I wanted to stretch ourselves. After hanging with Ryan, we realized we listened to a lot of the same music and that each of us had served some time in the trenches of “rock & roll.” So the last thing Andrew and I wanted to do with Ryan, was make another mellow, sad boy record. Given the raw and honest intensity of Ryan’s voice and words and the emotional bombast of our music…we hoped that by combining the two we would produce something uniquely beautiful. And yes, working with a lead singer and word visionary did give us a sense of release.

The album has received quite a low-key release so far. Do you have plans to tour or do a physical release for it?

Unfortunately, no. We had talked about touring but as time went on the main focus became perfecting the record and releasing it.

What’s the reaction to it been like from your fans?

It’s been a mixed bag. Some Hammock fans don’t want any vocals on any of our music… including our own vocals. But…listen to these words… read them. They’re amazing.

Which songs on the album mean the most to you and why?

'Last Night We Became Swans'. It’s our most unique song and the picture Ryan paints is top shelf cinema. Also, when Ryan told us the story behind the words…that was it. We adore this song.

With the record having such a long genesis, have some songs changed markedly since you first conceived of them together?

Other than the mixes, not much. Andrew and I did strip away and trim up some tracks but lyrically and musically the songs essentially remained true to the original vision.

Hammock have been exceptionally busy in recent times with plenty of new material already released and more on the way. Is The Summer Kills going to become another prolific outlet for you all?

Probably not prolific but we are always open to follow the muse wherever she may lead us.

Matthew Ryan has recently toured the UK solo and opening for The Gaslight Anthem. Isn’t it about time Hammock paid these shores a visit too?

What’s next for the band and for your individual projects?

Right now, the record is out there and we expect it to have a slow burn…we hope over time more people discover it. As far as Hammock is concerned, we have a new record coming out at the end of this year called Universalis. It’s the second instalment of a three-part project.

Last Night We Became Swans is out now via Hammock Music. For more information about The Summer Kills, please visit their official website.