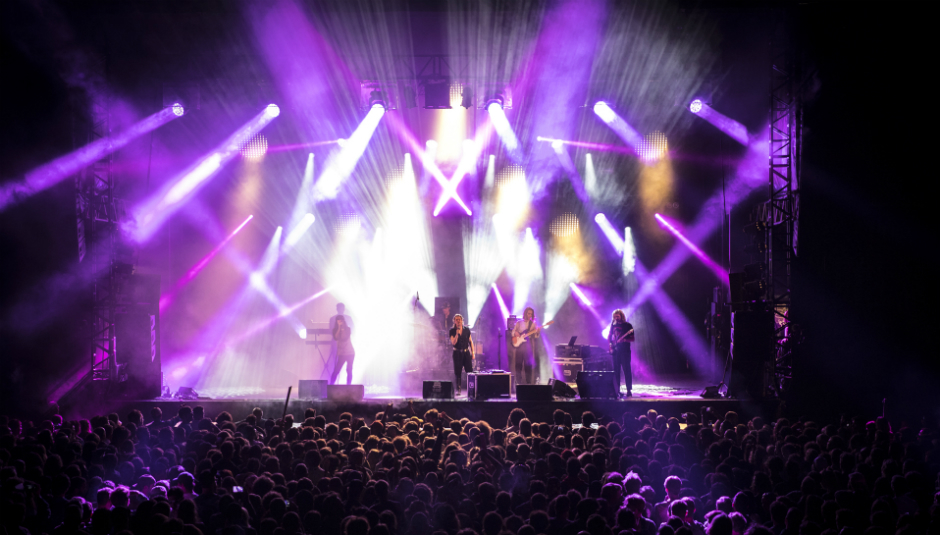 There’s something Narnia-like about getting an overnight ferry in Portsmouth and waking up in Saint-Malo on the coast of Brittany. After leaving England with a belly full of Wetherspoons’ fried chicken and a vista of rusting docklands, arriving in a medieval walled city and having breakfast crêpes in a cobbled square – served by a waiter in a beret and striped Breton top – is almost too exquisitely French to process.

Every good festival needs a unique selling point, and La Route du Rock’s is its sense of refinement – this early morning first impression is a hell of a scene-setter. Saint-Malo’s winding streets and alleys, castle ramparts and dozens of quaint crêperies could easily lure you away from the festival – until you realise it’s held at the 18th-century hillside Fort de Saint-Père, with its fortress walls, tunnels, and bricked archways.

Since 1991, La Route du Rock has been serving the discerning music fans of Brittany a steady diet of indie, noise-rock, post-punk, art-pop, techno and beyond. Compared with your typical multi-stage, 200-band, mega-sponsored weekender it feels like a palate-cleanser — the good Breton folk trust the clued-in organisers to just pick about 30 acts and put them on two alternating stages over three days, from 6pm to 4am. They do it the Pitchfork Paris way: one band finishes, you turn around and another one starts behind you in five minutes. It’s literally a walk in the park, and handy if you’ve been overdoing the supermarché wine and cheese in the lazy afternoons. 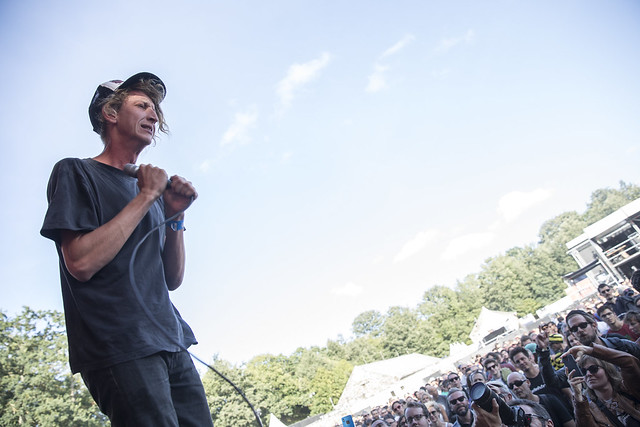 You get a few off-site options too, beginning with a pre-party on the Thursday. La Nouvelle Vague club’s basement is a shelter from the drizzle that dampens an afternoon stroll in the nearby seaside town Cancale – the oyster capital of France that also does a mean sideline in dry Breton cider served in a jug and porcelain cups. First up, Marlon Williams has stolen a few of Nick Cave’s moves, but if you’re gonna steal, steal from the best. The New Zealander may have the lecherous shakes and shuffles down, but the Nouvelle Vague performance feels more self-conscious than Cave’s ‘Jubilee Street’ glow. The former choirboy still has plenty of high notes left in him, and there’s beauty and drama in his skewed country – more Roy Orbison than Hank Williams. Compared with Marlon’s’ carefully-crafted live shtick, Ezra Furman seems disarmingly confessional, one minute clawing at his face and smudging his lipstick, the next regaling tales of finding an awesome red Moschino dress for $8.99 in Goodwill, or frying eggs for breakfast. Between jagged garage rock, glammed-up doo-wop, and the epic cello-led stomper ‘I Love You So Bad’, he and his band nail a cover of Smashing Pumpkins’ ‘Tonight, Tonight’, with Furman going full nasal Billy “belieeeeeeeve” Corgan.

To offset the histrionics, UK duo The KVB were made for basements, and their aloof coldwave psych-rock closes Nouvelle Vague in droning feedback, motorik grooves and abstract monochrome road movie visuals – and they just about take the first round.

From the basement to the fort on Friday, and you can kinda get your bearings in a few seconds by standing in one spot and turning your head: big stage there, small stage there, beer there, food there, got it. After hitting EXIT in Serbia (Europe’s most famous fort-based festival) last month, it’s apparent this one won’t need superhuman endurance levels and mainlined energy drinks. And if you’re allergic to beered-up festival crews in bro-vests, feather headdresses, and stag do t-shirts, the crowd is a tonic – a very manageable good-natured 8,000 or so, with a high percentage in striped Breton tops. Seriously, the tops are everywhere, and the merch stall continues the nautical theme, selling T-shirts with lobsters, ship’s wheels, anchors and the festival’s mascot – a Jolly Roger with a cassette head, cheekily repurposed from the famous ‘Home Taping Is Killing Music’ logo.

We heard some Route veterans were semi-scandalised when veteran pop star Étienne Daho was announced this year, maybe the most mainstream act ever at the festival. But digging into 30-odd years of hits and deep cuts on the first night, Daho wins over the sceptical hipsters, and the middle-aged fans in the front row also get their moment of the weekend. He nabs some spins and hip-swivels from Dave Gahan’s rock god playbook, and gives new wave synth-pop gems like ‘Le Grand Sommeil’ and ‘Week-End à Rome’ a scuffed-up Depeche Mode industrial-goth finish. 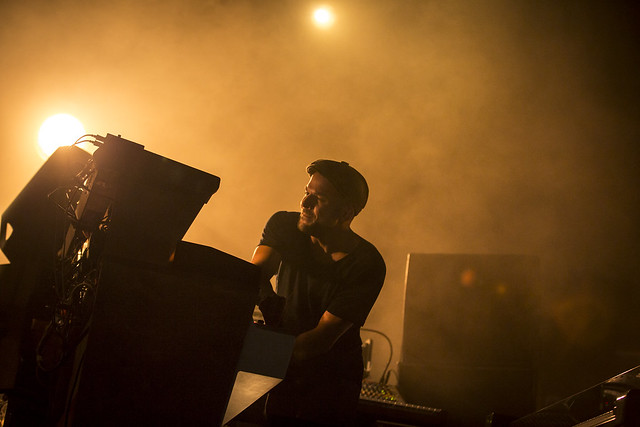 Fellow French act The Limiñanas are an early contender for gig of the festival, with the humming psych-rock of the duo’s records transformed into a six-headed blitz of feedback, no-bullshit Klaus Dinger rhythms, and a guitarist who’s some sort of alchemist – one mate dubs him a Doctor Emmett Brown mad scientist figure. At one point he makes a ukulele sound like a Tom Morello solo, summons bird noises by toying with his amp, and plays the guitar with a spoon. They invite Anton Newcombe to sing their collaboration ‘Istanbul Is Sleepy’ and he shuffles on and off looking like a drunk Neil Young, reading the words off a sheet – about as shabby and half-assed as The Brian Jonestown Massacre’s set later on.

No complaints about Shame’s effort, though. Over a few glasses of wine earlier we’d discussed their merits or lack thereof, with one pal saying they were a PG version of IDLES. But they pull off an uber-punk stroke by bounding onstage to the Vengaboys without so much as a trigger warning to the refined French indie crowd. Tops are off in no time, and soaked-through frontman Charlie Steen is run ragged as they pogo through their debut album Songs Of Praise and new tracks that keep up the punk energy.

If La Route Du Rock feels like a time out from the regular summer festival slog, the beach stage (La Plage) goes one better, as you sink into deck chairs with the castle walls on one side and the glinting afternoon sea on the other, the stage little more than a gazebo and a PA. It’s a perfect spot to recharge with a few lazy drinks and a new Breton game-changer — a hot dog, but the bun is a buckwheat galette. Gluttony aside, Marc Melia’s analogue synth set transports us from the north coast of France to a soft-focus 1970s sci-fi underworld. The proggy leads and gluggy, rhythmic arpeggios channel Tangerine Dream, Boards of Canada, and the Advisory Circle, with added misremembered nostalgia for French library music or mid-80s BBC Schools theme tunes.

But the most otherworldly figure at La Route Du Rock is Jonathan Bree, whose nervy chamber pop skirts around the darker edges of Scott Walker’s 1-4 albums or Jarvis Cocker gone rogue. A carefully-choreographed performance art piece as much as a concert, it features Bree, his band, and two dancers in American Old West formal dress, faceless masks, and white gloves, performing mini-dramas with exaggerated hand flourishes and synchronised interpretive moves. And the sight of one dancer/mime performing air guitar and then air fiddle with an antique wooden squash racquet is framed in my head for good. 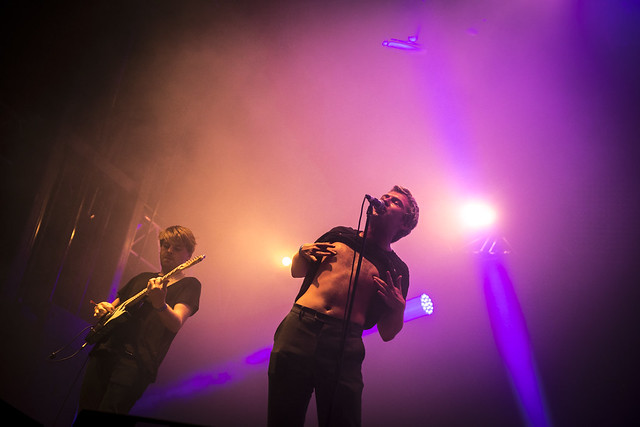 Ariel Pink is barely of this world either, and reports of a shambolic performance at OFF festival in Poland the week before don’t materialise on stage in France. He leans heavily on his 2017 album Dedicated To Bobby Jameson and goes in hard, making his weirdo outsider goth-pop seem like the most natural peak-time Saturday night jam. Special shout-out to the double-drop of ‘Time To Live’ and ‘Time To Meet Your God’ halfway through, and his hyper guitarist with the sailor hat who actually meets La Route du Rock’s nautical dress code.

All the cosmic capers are offset earlier with a majestic performance from proto-punk icon and all-round mother figure Patti Smith, who almost blesses the festival ground, seeming to summon whatever good is left in the world. “Everything feels fucked up but I just feel happy!” she proclaims, in the middle of a poetic, triumphant set that veers between fist-up anthems like ‘People Have the Power’, ‘Gloria’, and ‘Dancing Barefoot’, and a tender version of Elvis’s ‘I Can’t Help Falling In Love With You’, that turns into a mass karaoke sesh at your drunk aunt’s birthday.

The crowd go in deeper for karaoke near close of business on Sunday, when quintessential French crossover indie band Phoenix hit the fort for the first time in 14 years. It’s a victory lap of sorts, with frontman Thomas Mars mingling with the front row, Nick Cave-style, and predictable mass freakouts for their still-infectious smash hits ‘Too Young’ and ‘If I Ever Felt Better’. The unbridled joy washes away the bad taste of Superorganism, the most puzzlingly overhyped band of the year, whose quirky meme-pop just doesn’t translate live, never mind a lit Sunday night festival crowd. In a word: Pffffft. 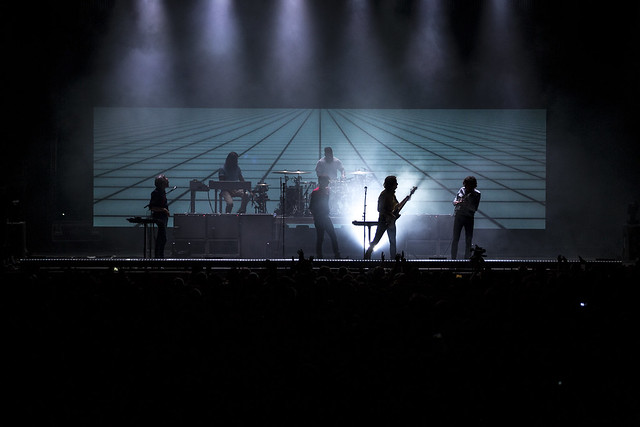 Quick disclaimer: the above tales of tasteful indie-rock and relatively wholesome crowds don’t quite carry into the early hours of La Route du Rock, as the festival turns into a dance arena, and all those sips of wine gradually get turned into loose-limbed techno moves. After Nils Frahm’s pin-drop piano transcendence on Saturday, Berlin DJ Ellen Allien hammers out rave stabs, acid and the nosebleed industrial techno of Schwefelgeb halfway through, so no guesses how the rest of her set panned out. Minimal Wave label boss Veronicka Vasicka doesn’t offer much of a breather right after, playing granular techno, industrial brutalism, a bit of DAF and Kraftwerk’s ‘Numbers’ through an EBM mincer. We bump into Josh T Pearson near the front at Vasicka – unmissable in a red trucker hat and a white tee & blue jeans 1985 Springsteen combo – and give him high-fives for his early evening main stage set, heavy on his new honky-tonk country-punk album The Straight Hits!, even if he apologised at the time for not playing his usual “sad bastard songs”. Having a little techno dance with Pearson wasn’t exactly on the bucket list, but it’s a suitably surreal end to a full-on night.

The Black Madonna takes us to church for the closing party on Sunday, with two hours of joyous house backed by a psychedelic stained glass window backdrop. In the most unashamed taps-aff, dancing-on-shoulders, hug-a-stranger moment, she drops Harold Melvin’s disco-soul classic ‘Don’t Leave Me This Way’, and thousands of us try to hit the “aaaaaaah BABY!” high notes in the chorus. Failing of course, but failing brilliantly. It’s a pretty jubilant end to a festival that had plenty more moments where that came from.

After 27 years, La Route du Rock is a festival that inspires loyalty – proud locals use it as an annual gathering, a sort of thanksgiving, and two English heads in our group had been 10 and five times respectively. It feels like a comfort blanket – everything in its right place, from the impeccable curation, to the location and the warm welcomes, and maybe if I come back I’ll work out the two-cheek kiss thing.

All other photos, credit as indicated