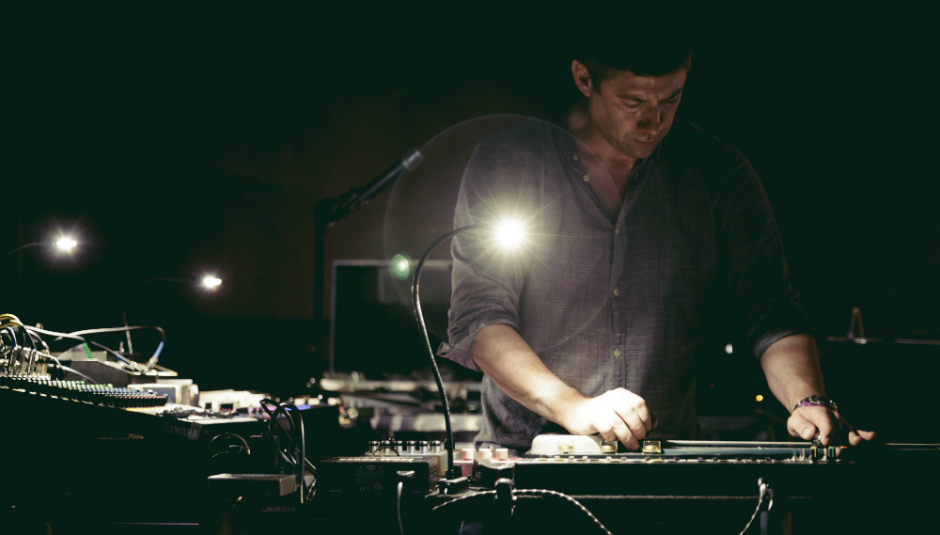 A few years back, Wes Borland quietly dropped Crystal Machete, a concept album for a non-existent 80s horror film that fused post-rock with electronic music. He hardly did any press for the record, choosing instead to let the album’s sonic textures and rhythms speak for itself. One could hardly fault Borland, given the visibility of his work with Limp Bizkit, the band that brought him fame, but also the opportunity to follow his muse. Recently, Borland’s muse led him into a four-hour durational set for Moogfest, an annual festival celebrating electronic music, art, and technology. Some of the set’s atonal drones, dark passages, ambient releases, and organized chaos will find its way onto Borland’s forthcoming album, Astral Hand.

Alongside drummer Alex Rosson, Borland lorded over a truly massive area of electronic gadgetry, both retro and futuristic at Moogfest. Modern samplers, ancient guitar effects pedals, a cassette deck, drums, synthesizers, and more samplers could all be seen in a massive working area. And there wasn’t a laptop in site to connect and synchronize the disparate parts. While Borland is primarily known as a guitarist with his various projects, the improvised, four-hour Moogfest set found Borland using the guitar as a sound generator.

In an interview with Louder in 2016, around the time of Crystal Machete’s release, Borland professed his love for electronic heavyweights like Boards of Canada, Air, Tangerine Dream, and Vangelis. It’s long been known that Borland’s musical tastes and other interests are quite eclectic. But with the aforementioned interview, Borland sounded like he had much in common with metal icon Justin Broadrick (Napalm Death, Jesu, Godflesh), whose Jesu and Techno Animal projects allow him to explore his more experimental sonic tendencies.

Borland traces his experimentalism to Jan Hammer’s electronic scores for Miami Vice. Growing up in the 1980s, he enjoyed Hammer’s synthesized compositions, with their moody and glossy veneer.

“It rides this edge of being really corny sounding but really amazing in the same way that the Blade Runner soundtrack does at times—they’re similar in a way,” Borland tells Drowned In Sound. “The feelings are different, but they overlap for me. Maybe it’s growing up in the 1980s. The synthesizer elements from that time that were being used in films, like Legend, which had killer synthesizer stuff going on, couldn’t be done with an orchestra.”

But Borland, as he puts it, quickly went “full metal” in his teens. If there was a keyboard in a band, he scoffed at it, assuming the music sucked by default. He couldn’t even listen to a track like Ministry’s “Thieves,” with its sampled and sequenced elements, without quipping that the band wasn’t actually playing the song. As the years passed, Borland ditched the purist player mindset, and re-embraced programmed electronic music. Now he listens to music as something like an eternal student.

“I’m always trying to learn from everything, [thinking] ‘What can I take away from this,’” Borland says. “So I can hardly every listen to something without thinking about what I can steal and assimilate. That’s what it’s like with bands like Air and even Nine Inch Nails. With The Downward Spiral, there was so much taken from environmental recordings, and there are so many things on that album that are samples. It’s not industrial, it’s people yelling or animals or using samples as percussion or textures, which is something that Trent Reznor doesn’t do now. The NIN I was interested in was all that texture.”

Between the ages of 16 and 18, Borland constantly recorded and stockpiled tapes. He carried a mini cassette recorder around everywhere, recording people, initiating conversation, trying to get people to talk about any number of things. For months, Borland tried to get people to talk about head cheese, a meat jelly made from the head of animal. He also recorded the VHS tape soundtracks of films like Texas Chainsaw Massacre to cassette, then played them on his car stereo.

Around the same time, Borland and his brother launched a project called Goat Slayer. The goal was to make a record in one night.

“We made records from age 16 to 35, but we’ve never put anything out,” recalls Borland. “If we ever release Goat Slayer, it’s going to be as a single and it will be ten hours long, and we’ll be like, ‘Sorry.’ I think this set me up well for this electronic music project.”

“For years we did improvisational performances, trying to make ourselves laugh but also playing instruments on the fly, jumping from instrument to instrument,” he adds. “It started as having a cassette recorder with all these speakers around it, along with a guitar amp with one of those voice transformers. Over the years, when I got money, we started doing it on Pro Tools.”

Borland says the experiments got to be too good, so Goat Slayer started making rules, or limitations. They made a musical obstacle course inside Pro Tools, where each would drop sounds, like a beat or “some terrible noise.” Borland and his brother would then turn the screen off, so they didn’t know what was coming, and hit record.

“I like rules and limitations,” Borland says. “For creativity to bloom, there has to be some force working against you in a way.”

Borland’s boyhood experiments, from the cassette field recordings to the Goat Slayer jams, were clearly in the sonic DNA of his durational set at Moogfest. He spent a great deal of time moving from one piece of hardware to another, creating a strange atmosphere of sound.

While Rosson triggered random, pre-loaded samples on an Akai MPC Live and added equally random percussive elements on the drums, Borland dropped many other electronic elements in and out of the mix throughout the performance. The main part of his system is a 16-channel console, with many sounds routed through an Echoplex, a very old but still amazing tape delay system famously used by Portishead’s Adrian Utley. Other sounds get routed to a reverb and looper pedals. Borland also loaded up two other Akai MPC Live’s with a wide variety of sampled sounds.

“The MPC Live 1 and 2 are sort of like the second tier system, where I don’t have operate with them but they have a bunch of useful stuff in them,” Borland explains. “One has a lot of basslines and beats, and then short samples of my friends talking, someone screaming, or little bits from all the things I’ve recorded over the years. The other has pads, environments, and soundscape kind of stuff.”

“I had MPC Live 2 loaded up with stuff so that if I reached a moment where I knew I needed to buy some time to set something up I could hit a pad, push it, and send it through the Echoplex and I’m good to set up the next thing or change things on MPC Live 1.”

Borland also used a lap steel with its own looper and effects chain, and a vintage Moog Taurus 1, an analogue bass synthesizer inspired by an organ’s pedal board. The Taurus is all over Crystal Machete, and will also factor heavily into the sound of Astral Hand.

“It’s all very complicated,” say Borland, laughing at the sheer size and routing configuration of his live electronic rig. “I’m using a cassette deck the whole time. I’ve got cassettes of bird and sermon recordings. I grab them randomly and throw them in.”

In the live setup’s original, pre-Moogfest configuration, Borland used a number of synthesizers. But the day before the set, Borland decided to ditch them for a briefcase full of tapes that he could select and play on his cassette deck at random.

“I’m not using any MIDI, and I’m not running any stereo,” he says. “I’m using things individually that I don’t want to play at the same time. Starting things in time would be easier, but it also wouldn’t be very flexible for me. It would take chaos away. MIDI feels like cheating for me. You lose some of the adventure.”

When it was all said and done, Borland enjoyed playing live electronic music, and plans on doing more of it in the near future. For now, he has two upcoming 30-minute sets opening for A Perfect Circle before he heads back into the studio to put the finishing touches on Astral Hand.

“There are definitely things that I’m going to lose to make it more mobile,” says Borland. “My wife was like, ‘You’ve got to get this shit smaller—this is absolutely out of control ridiculous.”

“But I could do [something like it] again, I think,” he adds. “The build-up to this durational performance was that I was worried about when I would get to pee. It wasn’t an issue, though. I took it easy on the coffee, and when I needed water, I took a little sip. I like marathon things like road trips or driving a tour van as far as I can. I felt an elated feeling at the end.”

Matadors and Daughters by Wes Borland is out now.