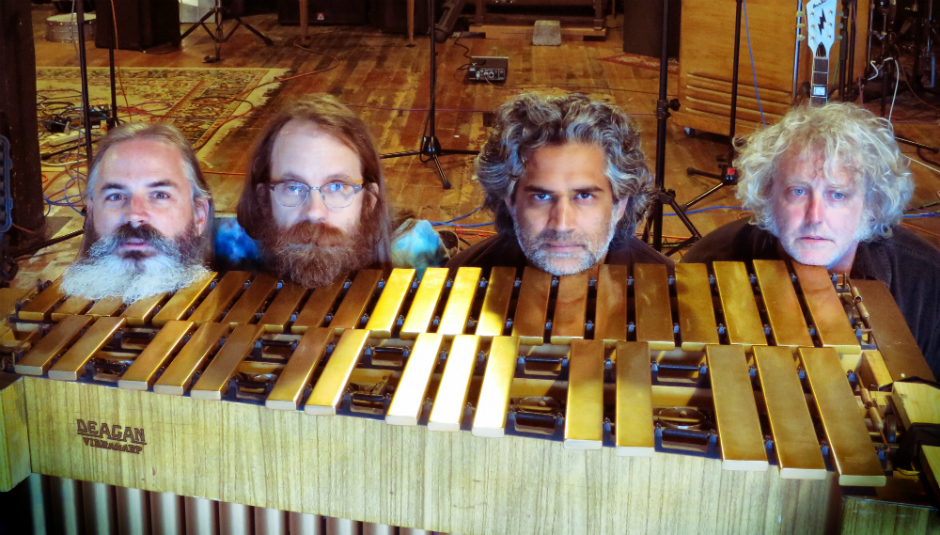 Much like David Byrne’s current crusade to highlight the myriad silver linings in the close-to-bursting cloud that is the modern world, psychedelic rock alchemists Wooden Shjips know a thing or two about the transformative power of creatively centring on the positive.

Nowhere is that more luminously on display than on their new album, V.. Marrying the San Francisco quartet’s singular brand of cosmic beatitude with cyclical patterns and lysergic-dappled solo forays courtesy of main man Ripley Johnson, it’s a feature-length salve to the darker worldly forces that would, given the chance, reduce optimism to a relic of bygone time.

Set to zig-zag across Europe with the rest of Wooden Shjips in August and September, Johnson talks to DiS about writing on the road, mining art from darkness, music’s intrinsic utilitarianism, the solace of the recent past and the simple, undying power of peace, love and resistance.

V. is your first album in five years. You’ve been busy with other projects but I suspect the gestation period for this stems from wanting to wait for the right time. Was that the case?

Ripley Johnson: Yeah, I think we just needed a break for a while. It’s good to miss something and, most of all, I missed hanging out with everyone, having that camaraderie. The actual gestation period was very short, just a few months. I got the itch to do a record and proposed that we do it very quickly and not tell anyone.

These songs stem from anxiety, both political and natural. How did you go about filtering these feelings and experiences into songs these major key, largely upbeat songs?

I’m an optimist by nature, so my inclination is usually to go upbeat. I was getting some solace from U.S. history, especially the 60s and 70s. Reading about the shit that was going down then, and knowing all of the beautiful art and music that came from it, was really inspiring for me.

I'm curious about how you incorporated new instruments and sounds into this release. Which new toys or approaches helped piece this one together?

The only real new toys were the synthesizers. I encouraged Nash (Whelan, Wooden Shjips keyboardist) to explore that, inspired by working with Sanae in Moon Duo. We wanted to make things lighter and brighter, sonically and texturally, and synthesizers can really help with that. Otherwise, we just focused on capturing a brighter sound in the studio, working with Jason Powers at Type Foundry. The guitars are cleaner in general. Maybe a little Tele and Strat on there.

Pete Kember AKA Sonic Boom’s "Three chords good, two chords better, one chord best." always springs to mind when I’m listening to your work in both Moon Duo and Wooden Shjips. Repetition is still a big part of your craft on this album. Did you approach the idea of employing reiteration and compositional cycles differently in any way here?

I wrote the bulk of the songs in the van on a Moon Duo tour, which I had never really done before. I was sketching out ideas and demos on my iPad. It was really enjoyable, watching the road pass by, getting deep into my zone. Usually, I write at home with my guitar. But compositionally it didn’t change things that much. I tend to write to a groove that I get in my head, playing around a specific beat. Without the guitar in my hand, maybe I was a bit more focused on that, and playing with keyboards and bass lines.

Looking at the bigger picture, musically, do you think that minimalism equates to maximalism?

I think it can. Certainly, in the production of recorded music, there’s so much you can do with texture and space and movement, that has nothing to do with chords or notes. Outside of classical music, I’m not sure the term minimalism has much meaning.

‘Ride On’ is my favourite track on the album. For me, it distils the strong sense of optimism laced throughout the album. Did you consciously approach the album as making a positive statement?

That was part of the goal. I just wanted to lift the fog, and the weight of current events, at least for a while, for myself. From the election, up to when we started the album, it was a pretty dark time for me. Everyone seemed pretty down. Music makes me feel better. I really appreciate the utilitarian aspect of it. I use music to wake up, to relax, to exercise, to celebrate, to drive, to get lost. So I hoped this album would be of some use to someone as a balm. You know, put it on, smoke a joint, sit in the sun, float away.

V. is a graphic representation of the peace symbol. When all is said and done, and everything is considered inside and out, is there anything more powerful and transformative than approaching the world and everyone else with love and peace?

Well, no! It’s easy to forget and probably not very cool, but it is true. I also liked it as a symbol of resistance, from Crowley, WWII. Resistance to these fascist, racist, misogynistic knobs that are poking their heads up around the world. So, yeah: peace, love, resistance.

When introducing people to Wooden Shjips, I always describe you simply as a rock band. Prefixes such as drone and psych are always applicable but feel redundant. It is, at root, rock music distilled. How do you view how others describe the project?

I try not to read about it, to be honest. I always say rock ’n’ roll. There’s a bit of roll in there.

What’s next for rock music? Is there anywhere to go apart from back to the beginning, time and time again?

Well, nothing ever really goes back. Even bands that try really hard to sound like a different era, they never really pull it off. I’m not of the opinion that it needs to go anywhere. Someone can pick up an acoustic guitar and make personal, compelling music that is relevant today. They can form a “rock” band and do the same. Or do it on a computer or harp or tuba. To me, we’re really beyond any of that mattering now.

You’re an avid collector and listener to music, old and new - something your NTS show captures very well. Which sounds are currently grabbing your ear more than others?

I’ve been listening to a lot of new age and ambient music for the last year. Healing music. It’s something I never explored deeply before, so it’s been fun. Like most things, I don’t care for 99% of it, but then I find artists that are really compelling to me: Aeoliah, Deuter, Bernard Xolotl, Laraaji. Tuluum Shimmering, which is contemporary. Or Prana Crafter, contemporary, with more folk elements. Bitchin Bajas. Also, weird, rootsy, American stuff, like Gun Outfit, Wet Tuna and Jack Adkins.

V. is out now via Thrill Jockey. For more information about Wooden Shijps, including forthcoming tour dates, please visit their official website.