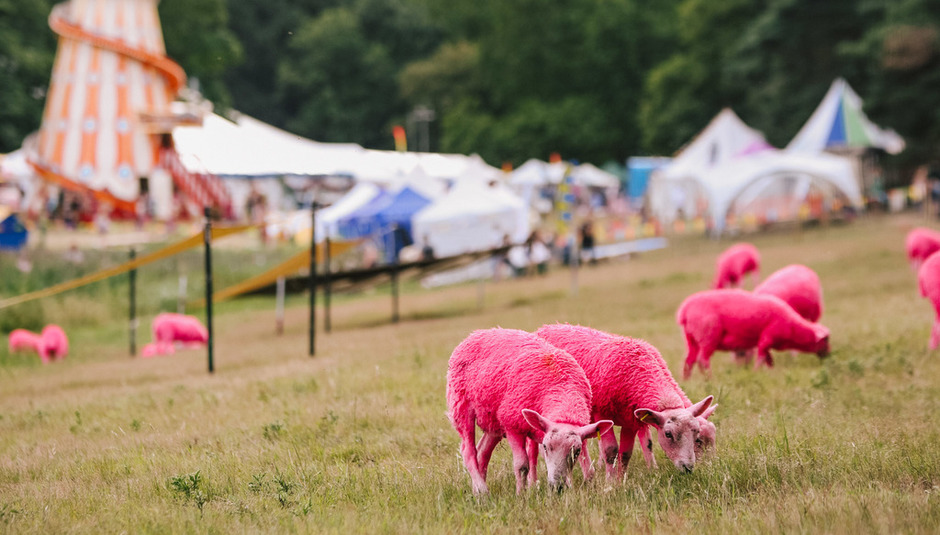 Latitude Festival has a particular flavour of nostalgia for this writer. In 2006 it was the first music festival I attended, as well as being the Suffolk festival's first edition. Growing up in Norwich, Latitude was a big deal for my friends and I, never having had such big names as Snow Patrol, Antony and the Johnsons, Patti Smith, Mercury Rev and for this aspiring journalist of 17 years of age on his first major assignment, the particularly exciting prospect of seeing Mogwai headline the final day.

I've seen Mogwai many times and in many special places since then, they remain one of my favourite bands of all time who I've even had the pleasure of meeting, but that very first time at Latitude remains my favourite, it's a set that still burns in my memory to this day, especially due to rarer treats 'Ithica 27ø9', 'Summer' and the mammoth 'New Paths to Helicon'. So what a pleasure it is, to get to re-create that magical performance, as Mogwai headline the BBC Music Stage some 12 years later.

This is just one of many success stories Latitude Festival has shared over the years. The second edition saw The National, fresh off the 2007 release of Boxer, playing a mid-afternoon main stage set to only a couple hundred people, little did they know at the time (though some might have had their suspicions) that they would go on to headline almost a decade later in 2016. This year's final day headliners Alt-J similarly rose up the ranks from a relatively low-key set in 2012, headlining the second stage a year later, before headlining in 2016.

If there has been something Latitude has been consistently impressive about, it's this ability to seek out the brightest young talent who go on to become future stars. This year's edition promises much of the same, and here is Drowned in Sound's top picks for Latitude 2018:

Relative newcomers Confidence Man have been one of the standouts of the festival season so far, thanks in no short part to their rapid-fire explosive live performances and hugely fun power-pop tuneage, from debut album Confident Music For Confident People. The Primal Scream-inspired Aussie group has been taking full advantage of their long-distance travels, wowing crowds at All Points East just last month, they are not to be missed!

And You Will Know Us By The Trail of Dead

Admittedly, ...Trail of Dead have very much been about the block once or twice already, however, the reason this particular set is worth catching is that the band are currently in the midst of their full-album tour of seminal record Source Tags & Codes. While this performance isn't billed as that exclusively, given it has been a staple for this current incarnation of the live band, it's a pretty safe bet we will be treated to the album if not in its entirety, then pretty close to it.

If you don't know Alex Cameron yet, fans of Saturday's headliners The Killers will soon enough. Aussie sleaze-pop maestro - plus his right-hand Sax man Roy Molloy - Cameron is a credited co-writer of half of The Killers' latest album Wonderful Wonderful and has been joining the band on stage during their world tour together in which Cameron has been the support (so pro tip, expect an appearance during Saturday's headline slot). But Cameron is more than a collaborator, he is one of the wittiest and evocative songwriters around right now, captured perhaps best in his last album Forced Witness's single and Angel Olsen duet 'Stranger's Kiss', in which his may or may not be real-life girlfriend, Girls actress Jemima Kirke, stands in for Olsen in the accompanying video.

It may have been a long wait, but thankfully, All Nerve, The Breeders' first album in a decade was completely worth the anticipation. A true return to form from one of indie rock's best songwriting duos (Kim & Kelley Deal, the latter coming off the back of an excellent collaboration E.P with Protomartyr) who will also have the huge summer festival hit 'Cannonball' in their arsenal to fire at will. Given the band's tendancy to disappear for long stretches at this point, this rare opportunity is not to be missed.

This Danish disco-punk trio are only just beginning to make waves on our shores, though across Europe they have already toured in support of Royal Blood, to give an indication of their prospects. For the uninitiated, Nelson Can are putting out some of the most infectious and danceable pop tunes around at this current point in time, off the back of their debut LP Now Is Your Time to Deliver and two subsequent EPs. The band are rumoured to have a new album in the works as we speak, so it will be very exciting to see what they have up their sleeves.

Ironically, for a band whose most famous song features the lyrics: "Why don’t you watch football?/Even Tarquin likes football/Trevor Nelson likes football/So why don’t you watch football?" Idles face the possibility of clashing with the climax of this year's World Cup final (which by the way, Latitude has confirmed they will be playing). One has the feeling Idles aren't really the football types, especially given the references to the wrestlers Stone Cold Steve Austin and The Million Dollar Man Ted DiBiase on latest behemoth-sized single 'Colossus', suggesting they are more excited by sports entertainment than sports. At any rate, Bristol post-punks Idles are another example of a band whose stock and billing has risen considerably since last year's Latitude Festival, where they played one of the touted "sets of the weekend" and are now a featured act on the BBC Music stage and a must for anyone who doesn't care particularly if football is indeed, coming home or not.