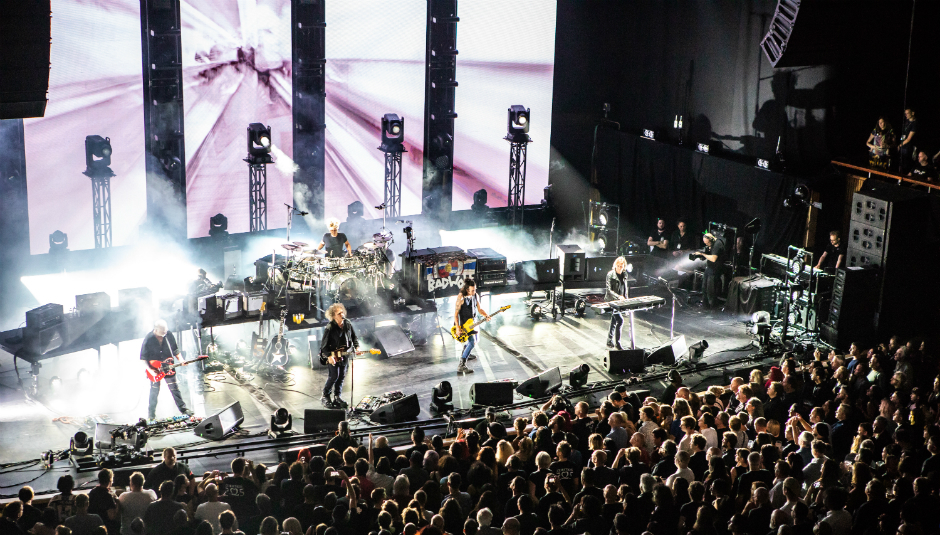 “Don’t worry, they’ve at least got to play ‘Love Cats’”, says the guy behind me, about 20 minutes of deep-cuts into tonight’s The Cure gig. It’s safe to say I’m not warming to the little group talking over my shoulder. Considering the legion of obsessives who would donate a limb to see the band playing in the stylish and comparatively intimate setting of the Royal Festival Hall, this gang don’t seem that bothered about being here at all. My suspicion that they might be bell-ends was first aroused when one of them described an incredible, passionate and moving performance by openers The Twilight Sad as “like The Cure but shit”. “Maybe we should just go straight to the after show?” replies his partner. Ah. Well, that explains everything.

These people were never going to be happy with this show, because it very definitely wasn’t for them. There’s another Cure gig happening a few weeks down the line, in Hyde Park. They’d be better off there, where they’ll probably hear ‘Just Like Heaven’ and can natter at the bar. The pricks will undoubtedly blag golden circle tickets for that too. “All the songs sound the same,” one of them will complain later, proving that these people don’t actually like The Cure. They like The Cure’s Greatest Hits. It’s not the same thing. 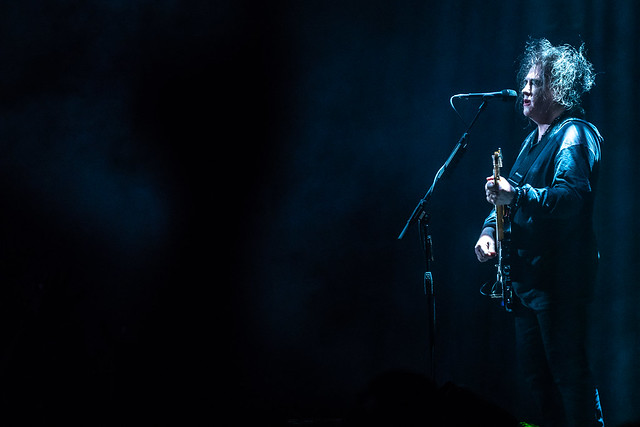 Because tonight is not about ‘Friday I’m In Love’ and ‘Inbetween Days’. It’s not that Cure. Technically it isn’t “The Cure” at all; this is the final show of Robert Smith’s Meltdown Festival, a grand triumph of art-rock, culture sluts, intense brooding, and cult groups with a pop-knack. The many faces of Smith refracted into a black rainbow of the bands he inspired, hand picked by the maestro himself. This capstone performance is billed as “Robert Smith and Friends present Cureation 25”. Some expected a goth extravaganza with various Smith acolytes helping him out on Cure classics, but actually, it’s just a canny way of getting around a contractual ban on playing London so close to that big Hyde Park show. The “Cureation 25” concept is a fans wet (4:13) dream, though; a set that begins with the title track from their 1979 debut Three Imaginary Boys, works its way chronologically through nearly 40 years of writing, pivots on some new stuff, and then slithers back through the catalogue in reverse order to finish in ’79 again with ‘Boys Don’t Cry’. 25 songs. Two from each album plus two newies. One neat concept.

Smith obviously has an eye on that big Hyde Park show, because this is not route-one Cure. He’s saving the hits. This is a deep dive, revisiting the unloved corners of the catalogue, like 1996’s Wild Mood Swings, or 2008’s 4:13 Dream, records that even the most hardened Cure fans rarely put at the top of the pile. Even with the stone-cold classic albums – Disintegration, Wish, The Head On The Door – Smith never picks the obvious songs. The is a journey through the difficult and the doomy and an exercise in how beautifully Robert Smith can paint even when he’s only using black. We get the sparse and moody ‘Other Voices’, a gorgeous take on ‘A Night Like This’, a vampiric, hungry run on ‘alt.end’, and a mesmerising version of ‘Want’. It’s a reminder that even when you remove the singles, Smith is a hell of a talent.

The guy complaining that “they all sound the same” is missing something vital about the Cure. Grouping these songs does indeed accent similarities in mood and tone, but it does so by weaving them together into a shimmering curtain. “Wave after wave after wave”, sings Smith on ‘From The Edge Of The Deep Green Sea’, and that’s how it feels, a cascade of Smith’s black imagination that washes across the tasteful RFH as an undulating, dark tide. The effect is cumulative, hypnotic and beautiful.

The man himself is on jovial form too, joking with the crowd, clearly enjoying the challenge of a set that’s a long way from accessible and includes seldom-played nuggets resurrected especially for tonight.

By the time ‘A Forest’ comes along, representing 1980’s impossibly bleak Seventeen Seconds it feels like they’re doing ‘Hey Jude’. Melancholic and introspective though that song may be, it’s the closest thing we’ve had to a hit and we suck in the joy of it like it’s a crack in the window and we’re trapped in an airless house. After that, a closing ‘Boys Don’t Cry’ feels like sheer indulgence.

In this way, by barely touching on those ‘Greatest Hits’, Smith has given us the most perfect distillation of everything that makes The Cure, well, The Cure. Obtuseness. Darkness. Trouble making. “We missed Love Island for this,” says one of the awful blaggers behind me, ignoring the fact that all the sex and drama they needed was right here all along. The Hyde Park singalong to ‘Love Cats’ will, I’m sure, be a lot of fun. But this? This is The Cure I choose. The remarkable end of a remarkable week.

DiS discovers the art of discord at D...