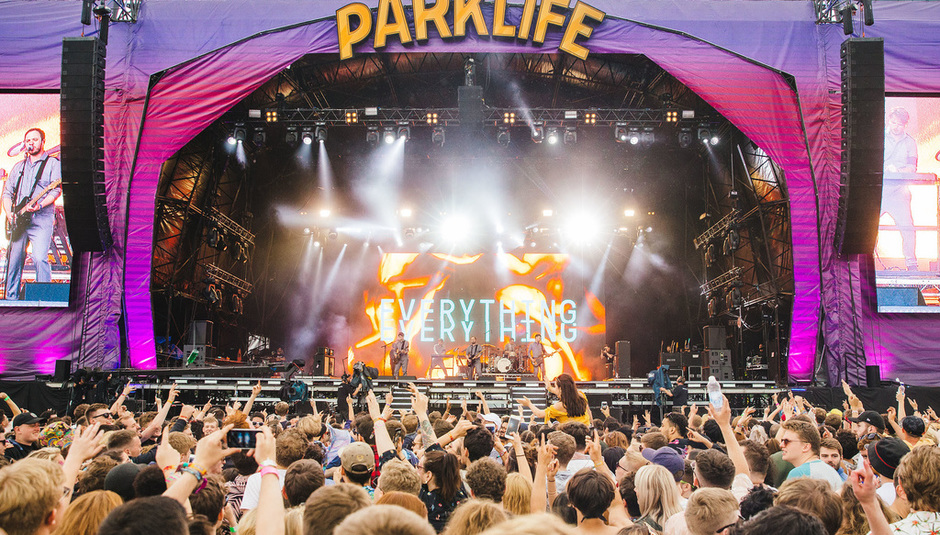 Now in its ninth year, Manchester’s Parklife Festival returned to Heaton Park with arguably its most ambitious lineup yet and one that catered, as usual, both for the dance fans that have been here from the start and the followers of indie rock and electro that the weekender has increasingly focused on recently. The Saturday’s main stage lineup is particularly star-studded, and it’s a sign of the increasing sense that Parklife is now an established festival with its own history that Jessie Ware, playing a mid-afternoon slot to a sun-drenched main arena, repeatedly hammers home to the crowd that she can trace the course of her own career by her appearances both here and at Parklife’s original home of Platt Fields Park on the other side of town, where she made her debut in 2012.

This time out, she’s in Manchester for the weekend; an ardent Manchester United supporter, she’d make an appearance as a pundit at Old Trafford as part of the charity match Soccer Aid the following day. The Londoner’s Mancunian mum is now a minor celebrity herself due to the success of Ware’s Table Manners food podcast, which Ware Sr. co-hosts, and she can be spotted side of stage singing along, as well-versed in the cuts from last year’s sparkling third LP Glasshouse as the older tracks. Anybody who caught Ware’s headline tour earlier in the year will notice that the multi-act theming built around the Edward Thomas poem ‘I Built Myself a House of Glass’ has been largely eschewed in favour of a more traditional festival set that includes all the big hitters - ‘Champagne Kisses’, ‘Say You Love Me’ and ‘Wildest Moments’ all among them.

Also up on the Saturday main stage is Lorde, who’s about to bring more than a year of touring behind her imperious sophomore record Melodrama to a close. As with Ware, she’s stripped away the ambitious stage show that she took to arenas across North America earlier this year; that said, her slot still involves a team of dancers, a full band and a setlist that leans heavily on album number two. There’s room, too, for her forgotten collaboration with Parklife favourites Disclosure, ‘Magnets’, as well as a string of Melodrama tracks that feel as if they were written for this time of year and this sort of weather. ‘The Louvre’ details young love and hazy summer nights, and ‘Supercut’ likewise; towards the end of the set, meanwhile, the record’s glorious bookends - ‘Green Light’ and ‘Perfect Places’, inspire full-throated singalongs, with the former closing the set to showers of confetti. On closer inspection, they’re little paper stars inscribed with ‘Melodrama Forever’. The album’s promotional cycle is about to wrap up, but you suspect it’ll be hugely important to the still-fledgling New Zealander for years to come.

N.E.R.D. are next up on the main stage, putting last year’s under-the-radar NOONE EVER REALLY DIES_ front-and-centre as part of an irresistibly fun set that served as a stark reminder of how well Pharrell Williams plays the part of hip-hop-rock frontman, which has been easy to forget over the past five years of death-by-‘Get Lucky’ and ‘Happy’. The group throw out covers of ‘Seven Nation Army’, ‘Drop It Like It’s Hot’ and ‘Pass the Courvoisier’, and finish up amid chaotic scenes when Williams invites dozens of fans up onstage for a rousing rendition of their Rihanna collaboration ‘Lemon’.

Closing proceedings on Saturday, meanwhile, are The xx, long-time favourites of the festival’s organisers, The Warehouse Project, but making their Parklife debut (not counting, of course, Jamie xx’s myriad solo appearances over the years, including another one this weekend). The Londoners are about to bring the curtain down on nearly two years on the road behind their divisive third LP I See You, and although they’re no stranger to crowds of this size by now, it remains remarkable that they find a way to take the hushed intimacy that their albums are famed for and transform it into something that sounds genuinely befitting a headlining position; ‘Infinity’s sonic maelstrom and urgent takes on ‘Performance’ and ‘A Violent Noise’ are all cases in point, but the set’s centrepoint might be a mashed-up and extended double bill of Jamie xx’s remixed version of ‘Shelter’ into a cover of his own ‘Loud Places’.

Sunday’s complement, meanwhile, is a diverse one that runs the gamut from a couple of stylistically different but equally fun pop sets on the main stage from Sigrid and hometown heroes Everything Everything to a typically boundary-breaking performance from Four Tet over at The Palm House. Chvrches honed their festival credentials a couple of years back when they toured extensively behind Every Open Eye, with singer Lauren Mayberry suddenly becoming a formidable stage presence, and they show few signs of rust at this, one of their very first shows since the release of Love Is Dead to a mixed reception last month. In fairness, both positive and negative write-ups commented on how stadium-ready some of the new tracks sound, and sure enough, set bookends ‘Get Out’ and ‘Never Say Die’, as well as the bouncy ‘Graffiti’, come over better onstage than on record, although it still remains the case that the less said about the Imagine Dragons-inspired ‘Miracle’, the better.

Tonight’s headliners, meanwhile, represent something of a joint affair. Eyebrows were raised when Liam Gallagher was announced to top Sunday’s bill, given that he’s already sold out the 50,000-capacity Old Trafford Cricket Ground in August; sure enough, his Parklife show (or ‘Parkalife’ as he re-christens it in protest at the obvious Blur connotations) is truncated in nature, running at just an hour and seeing him go on before the second-billed Skepta. Heaton Park was the site of Oasis’ final Manchester shows nine years ago this month and tonight sees a mini-reunion, with Bonehead, who grew up in this part of town, joining Gallagher for ‘Cigarettes and Alcohol’ and ‘Supersonic’. It’s a nice touch, but Gallagher’s set otherwise feels like a warm-up for the main attraction.

Skepta commands one of the weekend’s biggest audiences with an endearingly energetic set that opens with him singing ‘Live Forever’ a capella and quickly has mosh pits opening up with raucous renditions of ‘That’s Not Me’, ‘It Ain’t Safe’, ‘Man’ and the ever-chaotic ‘Shutdown’. There’s no reciprocation of Skepta’s appearance during A$AP Rocky’s set the previous night, where the two tore through their recent hook-up ‘Praise the Lord’, but with the likes of JME, Frisco, Jesse James Solomon and Suspect providing a heavyweight supporting cast, it’s not an issue. More than anything, this closing one-two serves as stirring proof that Parklife’s organisers saw the festival sea change coming, and latched onto the fact that diverse lineups like this one were going to become de rigeur as far back as their foundation as a student-oriented event in 2010. Next year, it’ll celebrate not just its tenth edition, but its cemented status as one of the UK’s most open-minded weekenders.

“That would be my utopia, a place whe...