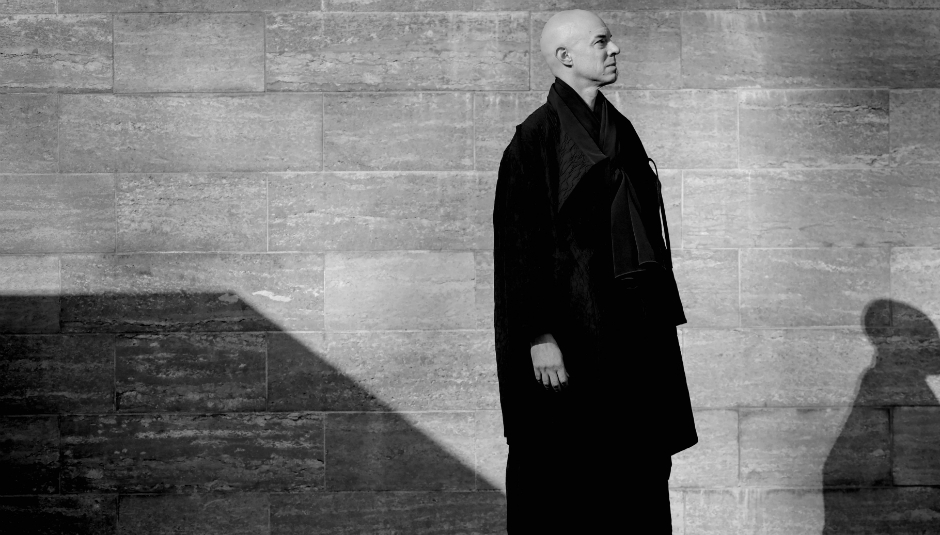 Borrowing a term from martial arts that denotes “moving together” in the sense of matching energies, AWASE is the new album by Swiss pianist, composer and record producer Nik Bärtsch. And it’s an apt one. Written and recorded by Bärtsch’s ensemble Ronin, it’s a breathless, carefully-crafted release that blurs the lines between jazz, minimalism, funk and ambient electronica, and one defined by the dynamic, ever-evolving interplay between pianist Bärtsch, bassist Thomy Jordi, drummer Kaspar Rast, and Sha on bass clarinet and alto saxophone. A prolific musician and collaborator, Bärtsch talks to us about the repetition, ritualism and precision, as well as the importance of passion and patience in making music.

DiS: You’ve just released AWASE. It’s a remarkably textured and well-composed release. You recorded it with your ensemble Ronin. Tell us more about your working relationship with these players.

With drummer Kaspar Rast I play since we were kids. We started to play football and music together in a band at the same time. And we still play together. So this musical relationship is a gift. When we were jamming as teenagers in the clubs, Thomy Jordi was already a successful and hip bass player in the groove scene in Zurich but he suddenly disappeared and we did not see him anymore for almost two decades. When I later was staying in Japan for a while I found him by coincidence in Tokyo where he was living. I met him there and when I showed him our music, he liked it very much because it was reduced to the essential grooves in a sophisticated way – exactly what he liked. He even took ‘Modul 27’ for his wedding march, a quiet adventurous step over there. When I was back in Switzerland and started the Mondays series with Kaspar in Zurich, we invited him and later he became Ronin’s bass player when former bass player Björn Meyer left for personal reasons.

Sha was already a very young but also very talented player when he wanted to study composition with me. We did a half lesson and then we decided that it might make more sense to play together than to study at a desk, and since then we play together in Ronin. So the whole group is a bunch of free players who really want to play together and meet every week to develop the music and to study these groove balances and paradox pattern cycles.

Repetition is a huge part of what makes your music great. From which artists did you first recognise how reiterative patterns in music can unlock or lead to special things?

Played repetition (in contrast to digital looping) is, of course, a basic and essential technique of music itself as a phenomena. But you can work with it in various ways. I am interested in the energetic, kinetic, meditative and social potential of the repetition: the phenomena that we call groove. Repetition as a musical strategy can lead to transcendental and uplifting psychological and physical experiences when you are creating it with the right mix of looseness and tension. You can increase your awareness without forcing it. We can find these musical and physical techniques in many tribal traditions - a player is always somehow also a dancer. You need to move to make a sound. Groove developed also in jazz and blues and from there into funk and at the same time, it came into classical music through Stravinsky, Bartók and later Minimalism. So repetition and groove are more universal musical strategies then styles.

You call your sound "ritual groove music". What, for you, defines the "ritual" element?

We are using ritual elements on all levels of our aesthetics. Every piece is a little ritual about a musical phenomenon or topic. In the repetition, a certain pattern relation is ritualized. But also in the para-tribal setting of our weekly Monday workshops and concerts you find this consistency of ritualizing the training on the music. There are rules and rituals like in a dojo or in a tribe of a village although we are a completely secular bunch of music freaks. But I also like this ambiguous atmosphere that we can find in many intelligent but also very sensual and direct musical works like for example in Stravinsky's Rite Of Spring, in Lennie Tristano’s ‘Turkish Mambo’ or in Brian Eno and David Byrne’s ‘Help Me Somebody’ – all some sort of Ritual Groove Music pieces…

A boundless sense of positivity is attached to your music. In terms of composing and recording, do you consciously put this across?

Life, love and togetherness are so precious and adventurous that we should not waste one second for bad vibes. But of course we are constantly challenged by all sorts of negativity but our duty is it to convert that into interesting energy and inspiring projects and forces. Music has the mystic power to transport this energy. It can be strong, sensual, subtle and deep at the same time. Composing, performing, recording, producing are celebrations of life and as a phenomena of togetherness and individual creativity at the same time.

As I understand it, in Aikido, awase (or matching) relates to two competitors sharing the center until one person takes it. Why do you opt for this title and how do you think it captures the essence of the album?

In the performing arts (which for me also contain sports, martial art, circus art etc.) the moment of acting, reacting and moving together all at the same time is essential. It means neutral engaged connection through readiness and intuition. It is a part of our “body thinking”. It means that two (or more people) are uniting together in one movement with a direction. Not in the sense of synchronicity but more as a dynamic moment of energy-, flow-, spin- and balance-exchange. So in our way of playing music in the triangle of composition, interpretation and improvisation these awase-moments are essential. This effortless interaction out of the nothing and out of the now is one of the major qualities in performing arts and for us a constant challenge to master. You can not force it but you have to constantly train it.

Precision and groove go hand-in-hand throughout AWASE. Do you find it a challenge or a breeze ensuring the two are compatible?

Precision is an essential category to survive and for me a very pragmatic and beautiful term (compared to perfection as an idealistic category). But it needs to be combined with relaxed movement, presence and a paradox mix of being it the now and feeling the stream forward. You could say you need to expand your now-globe; somehow an ironic moment of existence.

You've released many albums to date. How do you feel AWASE stands apart from these?

Every album has its clear concept. On AWASE I wanted as a composer to explore the rhythms in 5 against other rhythms in sophisticated forms but also very naturally flowing. You find it in every piece except in Sha’s “A”. The interesting complexity happens in the deep of the composition, not on the surface. I wanted to get simpler and more complex at the same time compared to the last studio album LLYRÌA. At the same time, the album should really cover the development of the band in the last four years. We have somehow even less individual freedom on this album but much more as a whole band organism. Our capacity to interact on the micro phrasing level and to shape the dramaturgies of the pieces live have very much developed. The band is now an experiences adult on this album and developed from an ancient groove saurian into a smooth panther. We hope that this evolution makes the band fit for the habitat of the groove organisms.

‘Modul 58’ has emerged as a favourite of mine from the album. Do you have a favourite track? If so, which is it and why?

I have no favourites by a part that I often listen to is the groove development on ‘Modul 36’ from 07:20 till the end. I hear and feel there very direct and sensual what is essential for me in our music: a mystic voodoo clockwork which is loading itself and the listener up which and is changing itself while it is ticking.

Motivation and impetus are, of course, a huge part of music-making and breaking new ground. But from which other contemporary, forward-moving acts do you take inspiration or influence?

I like in general people who have a talent for new combinations, people who are bringing things together that we did not think of belonging together before. I like young bands who are in the phase of establishing their view on what music can be today, in Switzerland, for example, the trio of Colin Vallon, or the bands Kali, Hely, or Ikarus. From all their music I learned to listen differently and to also remember when Ronin and I were in this phase. It needs a lot of passion and patience. We all should keep that spirit.

You play every Monday at your own club EXIL, but you’re off on the road again. At this point in your career, what is it that you take from the live experience, night after night, in different cities?

I live on planet music. Music is heaven on earth, a gift from the air to our ears and from being to being, a celebration of togetherness. We should take care of this gift altogether, nobody can do it alone.

Down With The Kings: DiS Meets Run-DMC

“That would be my utopia, a place whe...