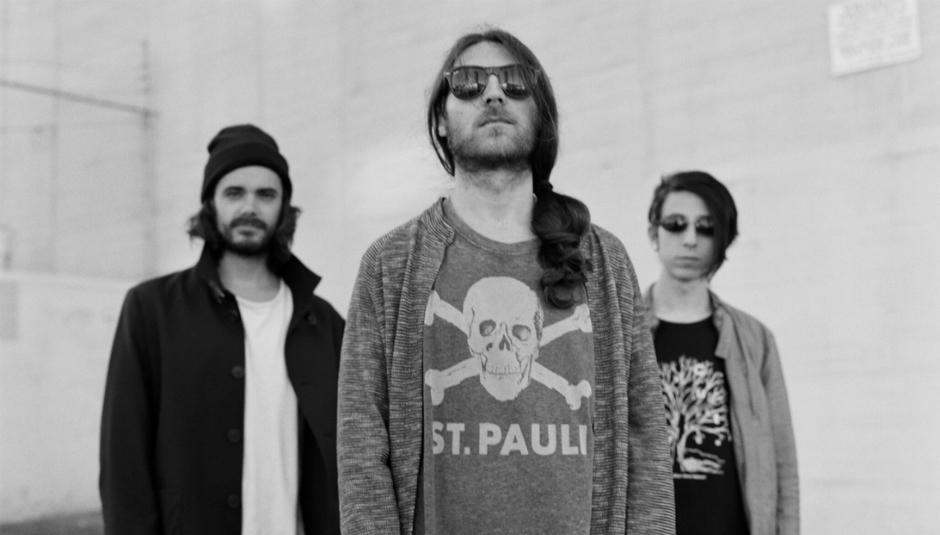 There’s something reassuring about Italian, progressive three-piece JoyCut’s existential mood music. Soundtracking the ‘discomfort of civilisation’ they forge aural challenges with electronics, industrial percussion from dual drum-kits, and surging guitar lines. Bubbling away in the underground for almost a decade, the band have become a formidable musical force releasing three albums and, under the digital mantra #JoyCutNeverStop, have visited three continents, 74 countries and 216 cities with their live shows.

JoyCut’s work has expanded outside the realms of simple musical performance. Following a successful TedX performance in Verona and inspired by recent travels in the East, the band played a sold-out Venice Biennale show debuting a six-act ‘visual opera’ called Komorebi, in tribute to Japan. This is a band with ideas and ambitions as big as their sound.

It seems strange that they have yet to fully impact on the UK, but that could be about to change. Their majestic sound has caught the attention of The Cure’s Robert Smith who has invited the band to play this year’s Meltdown festival in London. Vocalist/keyboardist Pasco Pezzillo took time to provide DiS with one of the deepest, philosophical discussions we’ve ever had, ahead of this momentous performance.

Each answer provided by Pezzillo is a deep, thoughtful journey of thought and ideas. The discussion begins with a focus on what it is like to be selected to play by a living legend.

“We are honoured, moved, still in shock and speechless. Kidnapped by a bubble that, like a light balloon, gives us the opportunity to admire the horizon from a new observation point. For us, receiving a call by Robert Smith is not simply an invitation. It's a cosmic caress. A stellar and galactic motivation to persevere. To move on. A planetary icon, undisputed, a formative idol, allows us to share his path, with a modality and a sensibility that is out of this world. He must be a unique human being. Soaked in love,” he says.

The invitation also takes on a personal resonance for Pezzillo. “There is a picture of me, a boy with the image of Robert on his back… Kiss Me Kiss Me Kiss Me. It is undoubtedly the most powerful and symbolic exemplification of what it means for us to be selected by him. He is our deepest imprinting. The way we approach music today, as full circle musicians, is a consequence of how much the model that was represented by The Cure has influenced our development.”

The art of JoyCut, possibly more than other acts, directly and knowingly feeds off their experiences and environs and, also, where they perceive themselves.

The name itself, ‘JoyCut’, is an amalgamation of Nick Drake’s song ‘Joey’ and ‘Cut’ from Pink Floyd’s The Final Cut, a nod to the band’s lineage in the prog sphere but by combining the names also unleashing the idea of development. As Pezzillo explains, they actually draw direct inspiration from more modern genres. “Darkwave, electronics, post-rock? These are only the defining stylistic elements which are closer to the nature of the music we grew up with.”

The inspirations have been crammed into three albums to date; 2007’s The Very Strange Tale of Mr.Man, 2011’s Ghost Trees Where To Disappear and the expansive, almost instrumental work PiecesOfUsWhereLeftOnTheGround from 2013. With a five-year gap since the last album, this Meltdown festival marks the live debut of much of the music about to be unleashed on their fourth album, which according to Pasco is “ready”.

“It’s long and it’s divided into two sections. It has a wonderful title that has its roots in our childhood, with references to when we were kids thirsty for the future. There will be orchestral breaths, rhythmic experiments and long sound saturations. A work that consists of four years of research, selection, and collection of intimate, intense and deep images.

“It’s definitive record, written as if it was the last one. As if we had to take advantage of the last absolute drops of oxygen left on the planet to kiss the most important person in our life under the downpour.”

Continuing to express how he wishes the band’s music to be perceived by listeners, Pasco gets deeply philosophical. It is clearly something the band have pondered over at great length. The answer takes some serious thought, and even then, it is possible, you might not be able to unpack it all.

“Perception deceives, music never lies. Few people want to accept that we don’t hear sound just through the hearing, but in fact with all of ourselves. All the spheres of the human senses are involved. One can’t imagine how to knowingly orientate the relapse of an emotional content, choosing the impact, giving it a name, a genre, a style. It is always defined by others. Those ones who choose their own path, don’t think about setting boundaries. Our music is simply a collection of "attempts" that refer, through the sound, to unconscious therapy: the composition reveals the submerged, in the form of synthesis, amongst will, fear, purity, ingenuity, and courage.

“It is an invitation to think. We are reflective individuals, who can be moved by the dusk and smile while chasing a rolling ball, barefoot on the grass.”

The band describe themselves as an ‘open planet’ welcoming people who want to push boundaries, and they don’t seem themselves as ruled by ‘geographical demarcation’. But while this is partially the case, Pasco provides riveting context for their music when talking about their geographical past and present.

“Our roots are in Basilicata, we come from the South, a unique south of the world. It’s a peculiar place, in absolute antithesis with the collective imagination. Our native town is Potenza, 800 metres above sea level, far from the Mediterranean stereotype: air is cold, winters are dark, you can even ski.

“Today, this land is the undefended and unheard victim of the violent abuse of oil companies, who are dedicated to relentless drilling, violating and raping a natural heritage like no other. Bologna is the city where we live, the university that has formed us and welcomed us. It’s an irreplaceable a centre of gravity surrounded by art, extraordinary intellectuals, a cradle of history, political culture, resistance, hospitality, poetry, irony, cooking, tradition, and evolution. University cities are often a simulacrum of unrest, expressive urgencies, ideological communities,” he explains.

“In this sense, the exposure to a lot of aesthetic beauty, expressive freedom, linguistic dissonance, has undoubtedly represented a critical, competitive, fundamental, functional influence. Whoever has something to say has to express it with irreducible determination [to emerge and stand out]. It is the city where there is the highest number of active music clubs, some are historical, whose international line-ups are a reference for the whole country.”

Clearly the product of their locations, JoyCut are also an international act, singing in English and making music that does not represent Italy or its music scene/heritage. Pasco expresses that there is a move in Italian music to try and succeed in an international mainstream, with art coming second to fame. JoyCut are the antithesis of this, they are pure art.

“We are not digital natives, we don’t sing in Italian, we don’t conform to the style of the market, I would say that we place ourselves in an ‘interregnum’ without measure, a fascinating black box.

“We are not alone, Bologna is a very healthy ecosystem, full of insane talent. Many musicians are still authentic, solid, constant, in love with their labour and continue to produce masterpieces. They stay strong, keeping alive, which is an important aspect of music. Ours is an existential necessity, not a satisfaction of superfluous needs.”

Activism comes as part of this ‘necessity’, in this case, the band’s passion for environmental issues. They espouse a green philosophy and all their production is tied to a sustainable future, with them partaking in a number of sustainability green projects. They even recorded the green anthem ‘Clean Planet’.

“The question here is that we should not discuss the environment as an identifying point for this band, we shouldn’t debate the exemplary or questionable behaviour of this person or that person,” explains Pizzollo.

“The attention towards the environment and the awareness of having to protect finite resources should, now more than ever, be a duty towards of an established fact. Governments discuss, scientists gather and academic make theories.”

But isn’t their huge use of technology in their music contradictory to this green message? Pasco is direct in putting this notion to bed.

“Technology is in the service of this message, technology is needed to remedy this irreversible damage. From industrial reconversions to the sustainable production of new clean energy, from the necessary revisions of food cultivation methods to an ideological, educational, and inspirational message,” he enthuses.

Pasco continues with a quick schooling on why this is the case, “Most of the food production works with very wasteful practices concerning energy, heat, and pollutants. Food production is linked to the crops and the transport of food products intended for animals. This process allows our meat [and not only] to be ready for consumption without interruption. It's the whole chain that needs to be revised.

“The final element is the consumer, now only an economic subject. Becoming aware of this means caring for the ecosystem in which we live. This also means to free oneself from the chains with which the homo economicus is trapped, in order to awaken, to clean up and return to being free subjects in thought, natural in primary needs.”

For JoyCut, their philosophies, their mission is not simply an act to gain attention, notoriety, and fans. Every aspect is a serious life-choice that not only invades their music but also how they live and present themselves, As the answer above illustrates, they ‘mean it’.

All this will culminate in a special, unique performance in London for Robert Smith’s Meltdown festivities. Pasco leaves the discussion with an affirmation of the show’s impending greatness.

“We will remain faithful to our path. A path made of sound after sound, sometimes accompanied by visuals, with strong and direct messages. We’re playing for the very first time some tracks from the new album, in an entirely exclusive way. We owe it to Robert, it's the only way we know how to thank him!”

JoyCut play Meltdown on the 15 June. For more information about the band, please visit the band’s official website.

"Some of the most triumphant music ca...