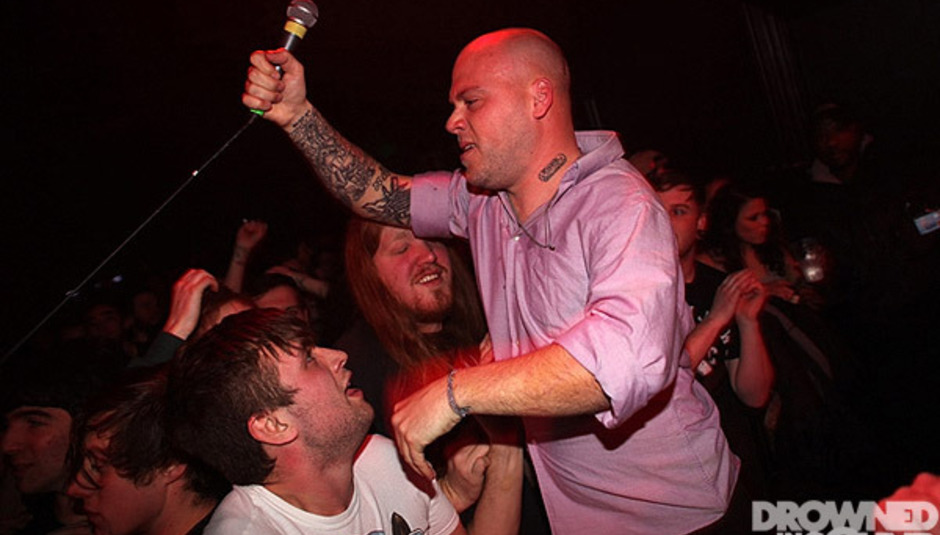 Download 2018: The DiS Preview Part I - Talking Festivals With The Bronx

Download 2018: The DiS Preview Part I - Talking Festivals With The Bronx

It's Download Festival this weekend (8-10 June) and DiS will be at Donington Park over the course of its three days. As with previous years, Andy Copping and the Download team have put together an incredible line up and in the first of two previews, DiS caught up with Matt Caughthran from LA punks The Bronx who are scheduled to play on the first day of the festival.

DiS: What are you up to right now?

Matt Caughthran: We are looking for an oil change right now! It's our day off today. We played in Fort Wayne, Indiana last night and we have a festival tomorrow in Columbus, Ohio called Rock On The Range. So we have a pretty easy day just chilling and driving from Indiana to Ohio.

How have the shows been so far on this tour?

It's been great. We're playing a lot of shows this year. We spent a lot of time in the south. Mainly playing club shows and festivals so we're ready for Download. We've got a couple of cool shows after as well at Gorilla in Manchester and The Electric Ballroom in London then we go out all over Europe so we're ready. We're stoked.

What is it that makes Download so special? It seems to be at the top of pretty much every punk or metal band's festival wishlists.

It's the history. There's a lot of festivals that we always want to play, like Coachella for instance, but that has quite a mix of different styles and genres. Whereas Download is specific to our genre of music. If you're into rock and roll, punk or metal I can't think of a more ass-kicking festival. It's always an honour to be a part of it and something we've been looking forward to for a long, long time.

How does it compare with other festivals?

It's pretty radical! The aggression is always there which is pretty rad for us because you're able to get that same atmosphere in a big setting as you would playing in a club. So whenever a band like ours has the opportunity to play a festival like Download it's always next level. There's an energy there you don't really find anywhere else. Everybody's ready for it. Whereas whenever we play festivals that cater to all different types of audiences it usually lacks that complete feeling of chaos you hope for. Whenever we've played Download things have gotten out of control, and that's something we always look forward to.

Do you tailor your live sets specifically for festival audiences? Will there be any Mariarchi stuff in there?

No, Mariarchi's not coming to Download unfortunately. But maybe sometime in the future? You should never close the book on that because the Mariarchi stuff seems to resonate with everybody. The Download set will be 100% Bronx. Of course, we'll be playing stuff off all of our records. Club shows we get to play a little bit longer, but the fun thing about putting together a festival set is we get to choose all our favourites then play them all in one go. I quite enjoy working out which ones we're going to play because my favourites change all the time. So at this moment in time, I'm not sure what we're going to play. The setlist changes every night. We'll probably put it together on the flight over. I know it will be fucking good that's for sure!

Are there any other bands you're looking forward to seeing at Download?

To be completely honest with you I've been so wrapped up in this US tour I haven't had time to have a look at who's playing on the same day as us. But I do know there's always good bands to be seen at Download and the best shows I've seen at festivals are ones that weren't planned where you've just shown up on the day. Normally in the build-up to show time we tend to spend most of the day preparing so don't really think about who else we're going to see until after. I prefer that. Jumping into the moment. I'm sure I'll have a good look at who's playing at some point but as of now I haven't really jumped in, but I do know there'll be lots of great bands so I'm looking forward to catching some of them.

How do UK audiences compare with those back home in the States? Are we more reserved over here?

No, I think it's more of the opposite. That whole attitude of just going for it and not worrying too much about what other people think or trying to look cool has always been a staple ingredient of UK shows. I remember the first time we played Leeds Festival. People were just happy to be there. It was a carefree type of vibe from start to finish. It's a great feeling because it's almost like a term of acceptance. US crowds and festivals have come a long way because there was a point in time when they were a bit thin on the ground. Especially at festivals, but that's all changed now and I'd say a lot of that is down to the UK influence for sure.

What's the best piece of advice you could give to someone that's going to a festival for the first time?

Go for it! Have fun and see as many bands as possible. Stay hydrated. Just have fun and overall, do whatever the fuck you want.

One of the big talking points in the UK right now is around the number of female artists on festival bills compared to males which is considerably less. The PRS Foundation's International Keychange body has come up with an initiative whereby 45 international music events have pledged to achieve and maintain a 50/50 gender balance by 2022. What's your take on this?

I think that's rad. It's hard to tell when you just go there and play, but if you're running a festival and not giving opportunities to female acts that's 100% bullshit. It's just not the way the world should work. But then at the same time, you don't want bands just getting booked on account of them being female. It's a tough one to call. Maybe there aren't as many female bands out there? I don't know. To me, it's all down to the attitude of the booker. If a band's good enough there's no reason why you shouldn't be putting them on. But then if the only reason this kind of thing is happening is because there are more guys in bands than girls it's difficult to see how you can get around it. I just believe everyone should have the opportunity to play music, whether they're male or female, gay or straight, whatever. It's like anything. The more diversity you have on the bill the better it's going to be. No one wants to see the same shit repeatedly stacked on top of each other. It's better for everyone involved.

Your most recent album V came out last year. Are there any plans to make another record in the foreseeable future?

Oh yeah, we're always planning, always working. So there are plans for both new Bronx and Mariarchi records in the not too distant future. Right now, we don't know which one will come first but we guarantee it will be one of them. We've got a whole year of touring so we're pretty focused on that, making sure we're fit and healthy and kicking ass every night. After that, it's back to writing and getting creative together.

You also got back together in 2016 with your other project The Drips. Are there any shows or recordings in the pipeline there?

I'm sure there will be. The Drips is something that always jumps up and resurfaces from time to time. We've just released our record on vinyl for the first time which is pretty cool, and one thing usually turns into another. Especially when we're writing or doing something like that. Certain songs don't feel the right way for a Bronx record but make work for another project. It's always something we think about. We want to keep stuff like that alive and all have our own little projects going on outside of The Bronx, so I guess there may well be something special just around the corner.

Are there any new bands you'd recommend for Drowned In Sound and its readers to check out?

How's that band Shame doing over in the UK right now? I like their record a lot. I want to see them live at some point but I haven't managed to catch them yet, so they would be cool to check out. I dig that record. Aside from that, I'm a bit out of the loop with new bands. It's always tough to keep track with what's happening elsewhere when we're focused on touring.

The Bronx play The Avalanche stage at 18:30 on Friday 8th June. For more information on the band please visit their official website.