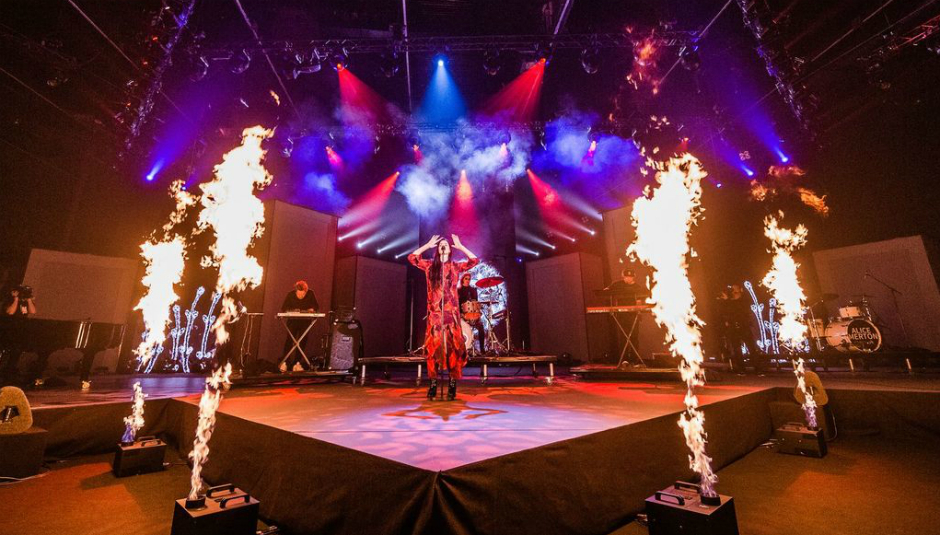 Of all the things I expect to encounter at The European Border Breaker Awards, Jools Holland bounding out onto the stage like an enthusiastic Labrador puppy isn’t one of them. But here he is, joshing with the warm-up man and explaining precisely how the night is going to work and when to applaud in that deliberate, stilting delivery of his. “Are you ready Groningen?” he asks. “I said, Are you ready Groningen?” Everyone whoops and hollers, and settles in for the show.

We’re here at the MartiniPlaza, a vast indoor arena that’s been turned into an elaborate stage and TV studio for the night. Over 1,000 guests file in to watch the spectacle; VIPs in seats at the back and sides, everyone else standing. The whole thing is filmed for TV (but not broadcast live), and production standards are more Eurovision than Top Of The Pops; there are glitter cannons and pyrotechnics, and a retina-searing light show. It’s slick and polished, the sort of event that screams big budget and a heavy rehearsal schedule. But then the EBBA Awards are, I discover, a Very Big Deal, a vital element of the European music industry and one that’s taken seriously by artists and fans alike on this side of the Channel.

Initiated by the European Commission in 2004, the awards are designed to increase awareness of European pop music and to highlight – and celebrate – the continent’s musical diversity; to literally break down borders. It’s financially supported by the Culture Program of the European Union, whose remit includes the “cross-border mobility of artists and cultural professionals” and to “foster intercultural dialogue” – precisely the sort of noble goals that help enhance a country’s or continent’s cultural heritage. Watching Fruzsina Szép, a board member of Yourope (the European Festival Association) and the Festival Director of Lollapalooza Berlin give an eloquent, impassioned speech about the value of music, and how it can bridge divides and instigate change, one can’t help but feel saddened by UK attitudes, where cold, hard market forces are King and public money is not to be wasted on anything so trivial as “culture”.

Many in the UK might not have heard of the EBBA’s, even though it has benefitted a number of now prominent British artists. Adele, Mumford & Sons, and Disclosure are all previous winners, as is current pop sensation Dua Lipa, who scooped both an EBBA and the Public Choice Award last year. Jools Holland has hosted the event since 2009, since it began running every January in conjunction with the Eurosonic Noorderslag Festival. It has quietly grown in stature and importance, and while the process of selecting the ten winners seems a little vague – three criteria are used; radio airplay by EBU radio channels, an artist’s “success” at European festivals, and how well their first international release does in EU countries – there’s no doubting the quality, and genuine gratitude, of the artists here to perform and collect an award.

After an introduction filmed four times, by four different people in four different languages, we finally get to the music. Sleek, crisp pop dominates the line up, understandably so when one considers the upper echelons of national charts and Spotify playlists. There’s Sigrid, recent winner of the BBC Sound Of 2018 poll, dressed head to toe in black – as is her band – who gives a confident, bubbly performance of breakout hit ‘Don’t Kill My Vibe’. Fellow Scandinavians Skott and ALMA are also here, the former’s icy, glacial synthpop contrasting with the latter’s spikier, punk-pop; both are tipped for big things in 2018, and it’s easy to see why, both having an easy charm and a style that’ll no doubt please marketing departments and pluggers. German’s Alice Merton swims closer to straight up indie-pop, her song ‘No Roots’ a catchy number about leading an itinerant lifestyle and not really belonging anywhere.

Of course, one could also interpret it as a riposte to rampant nationalism, emphasizing our shared humanity and the need to reject the “us v them” interpretation of immigration. Perhaps inevitably after a year dominated by Trump and Brexit politics, in particular the frustration and disenfranchisement felt by young people, frequently bubble to the surface. “We are the youth of Europe,” says Denmark’s Off Bloom on collecting their award, “and we’re gonna make the most beautiful future together.” The band’s music – a stylized trap-and-EDM-infused pop – certainly sounds very “now”, a fusion of popular tropes into a danceable, anthemic package.

Ditto Youngr, the UK representative, a shining example of the sort of inclusivity and diversity the music industry all too often ignores. An absurdly talented multi-instrumentalist – his one-man rig sees him play, and loop, a guitar, bass, samplers, keys, a drum machine and live drums for ‘Out Of My System’ – his acceptance speech pointedly refers to spreading “joy, happiness, and positivity” through music, elements that popular discourse has been sorely lacking of late.

Two artists are sadly absent; The Blaze, a French rap duo, and Salvador Sobral, the Portuguese singer-songwriter who walked off with the Eurovision crown and the hearts of millions last year. It’s never really explained why The Blaze aren’t here, but Sobral is laid up in hospital recovering from an operation. His manager picks up the award on his behalf and reads out a heartfelt note about love, gratitude, and following your dreams, elements that are present in his sweet, acoustic songs as well.

One of the most moving performances comes from Belgian singer Blanche, whose haunting, angelic voice is accompanied by a string quartet. Aged just 18, Ellie Delvaux – Blanche is her middle name – is already no stranger to bright lights and big stages; as well as competing in Belgium’s version of the Voice, she represented her country at last year’s Eurovision Song Contest with ‘City Lights’, the song she sings tonight. Picking up her award, she seems somewhat overcome with emotion, as if the enormity of her achievements over the last twelve months have finally hit home.

But it’s another Eurovision veteran who steals the show, and the coveted Public Choice award. Bulgarian Kristian Kostov, the youngest artist at a mere 17 years old, wows the crowd with ‘Beautiful Mess’, the delicate piano ballad that came within a whisker of pipping Sobral to the Eurovision title. His voice already sounds stronger and more confident, and perched on a stool at the front of the stage, he appears utterly at ease in the spotlight. “This is for the best fandom in the world!” he says, dedicating his success to his sizable, and very vocal, fanbase.

After the various presentations and yet more glitter and confetti, the artists mill around the stage posing for official photos with Holland and assorted VIPs. Some have to perform again tonight as part of Eurosonic, while others have 24 hours or longer before their own show. Given the trajectory of past EBBA winners, you’ll no doubt be hearing a lot more from them over the coming twelve months, and a few already have festival slots and headline tours in the bag. There are those who’ll argue that the EBBA’s are a self fulfilling prophecy, granting exposure to those new artists who, by dint of significant (major) label backing, need it the least, but Eurosonic is an egalitarian affair; the goal here is a noble one, and all ten artists deserve the right to be heard on merit alone.