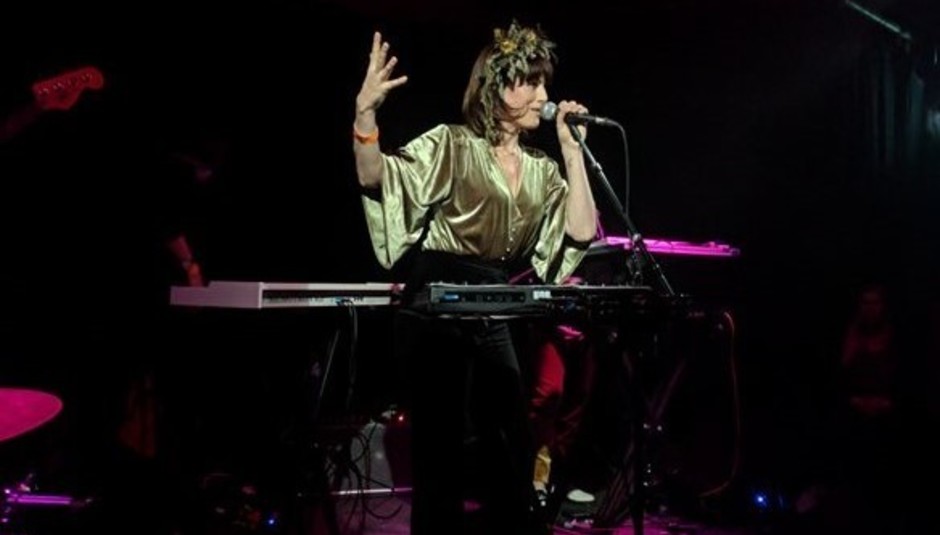 A Heavenly Weekend In Hebden Bridge 2018: The DiS Review

A Heavenly Weekend In Hebden Bridge 2018: The DiS Review

It wouldn't be winter without Heavenly Recordings' annual bash in Hebden Bridge. Held at the Trades Club, a venue built almost a century ago as a joint enterprise between half a dozen trade unions associated with the cotton industry, it's perhaps fitting that the two operate in tandem for three days every year, each existing and in many ways flourishing on their own terms.

Indeed for Heavenly Recordings, this represents their 28th year of existence which over that time has seen them build one of the most accomplished rosters in the history of British music. Looking back through their back catalogue throws up a treasure trove of incredible records unmatched anywhere else in modern times. With an ethos of "Believe In Magic", it's hard to envisage anyone else taking the same risks yet still coming up smelling of roses afterwards. Whether redefining the zeitgeist, providing a safe haven for cult heroes, or offering a second lease of life to artists lesser labels had long since given up on, Heavenly have been at the forefront every time.

So it shouldn't come as too much of a surprise that the first night's openers Audiobooks potentially fall into all three categories. The duo, comprised of vocalist Evangeline Ling and Welsh musician-cum-producer extraordinaire David Wrench might be playing only their first ever gig this evening, but you wouldn't notice if it wasn't for the fact they casually mentioned it prior to going on stage. Confident and assured throughout, Ling's slightly acerbic vocally delivery combines insatiably with the coarse beats Wrench pumps out from behind his modular synth and drum machine combo. Imagine if Ari Up from The Slits had performed a duet with Aphex Twin's Richard James and you'd be somewhere near the right ballpark. It makes for a thoroughly engaging spectacle that serves as a delightful entree for the rest of the weekend's bill.

It was in a similar spot this time last year opening for Toy where Britain first caught Drowned In Sound's collective eye, and thirteen months on from that hazy January evening it's clear from the outset they've lost none of that sparkle. Hailing from the city of Preston, perhaps the least notable on the north-west circuit when it comes to its musical history, the duo of Katie Drew and Joey Cobb fill the next thirty minutes with dreamy ethereal soundscapes that bare resemblance to Cocteau Twins albeit on a more lo-fi scale in front of a monochrome backdrop that befits their statuesque demeanour. Surprisingly they have no recorded output as of yet, but when they do if its anything like the beautiful noise they deliver from the front of house this evening their star will shine brightly.

Headlining Thursday's proceedings is Gwenno, whose 2015 Welsh language opus Y Dydd Olaf received widespread critical acclaim. Back next month with long awaited follow-up Le Kov, a record which celebrates the language and is sang exclusively in Cornish, unsurprisingly the majority of what she plays is taken from her new record, and even though it isn't in the shops just yet, the reaction out front suggests its message will be every bit as powerful as its predecessor. Enchanting from start to finish, her set provides a fitting climax to the first night's proceedings, not least when she breaks into a rousing rendition of first album favourite 'Chwyldro' towards the climax of her set. 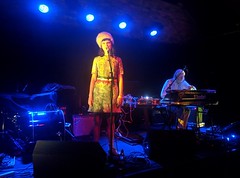 The next day, it's left to another recent addition to the Heavenly stable Dan Stock to kickstart the show, perhaps the most obvious of the label's outsiders in that he doesn't really seem like your typical Heavenly artist (but then when all's said and done, who does?). Armed with just a guitar and microphone, Stock goes about the business of warming up a packed Trades Club on this cold Friday evening with vignettes about love, loss and Mark E Smith. Shyly introducing each song as though it may be the last chance he'll get to sing it, he just about manages to pull it off.

Cardiff's Boy Azooga take the musical spectrum full circle for their energetic half hour set. The four-piece, formed around the songs and wisdom of singing guitarist and reluctant frontman Davey Newington fuse together all the best bits of post-punk and krautrock from the past, present, and future. Having previously served time in underrated art-punk act Houdini Dax and more recently provided the backbeat for Charlotte Church's Late Night Pop Dungeon, Newington has assembled a group whose musical chops are as tight as a duck's arse if you'll pardon the expression. Buoyed on by a legion of enthusiastic teenagers down the front, most probably here to see tonight's headliners but clearly won over by Boy Azooga's insistent rhythms, they're a minor revelation and one that you'd do well to make time to see when they arrive at a town near you. Which they will be doing very soon.

Just thirteen months earlier The Orielles opened the first night of the 2017 edition of the Heavenly Weekend. Having only just signed to the label a matter of weeks before, it was a baptism of fire in many ways but one which kickstarted an incredible year for the Halifax trio. So their ascendance to headline status this evening proves testament to the hard work they've put in ever since. Indeed this past week has been something of a joyous cause for celebration. Debut album Silver Dollar Moment came out a week last Friday and reached number seven in the official vinyl charts, which is an incredible feat in itself, while their steady growth as a live band of some repute has seen their popularity rapidly increase with sell out shows all across the land. So it's easy to see why there's an overwhelming sense of anticipation about to greet their return to the Trades Club this evening. Playing as a five-piece band thanks to the addition of a second guitarist and keyboard player, one of whom we recognise as Alex Stephens from Trudy And The Romance, what that does is give the songs more license to breathe, and as a result they're a revelation. 'Mango' and 'Sunflower Seeds' take on a whole new lease of life with the shackles loosened while '48%' becomes every bit as colossal as its recorded counterpart promised. The Cheshire cat grins plastered across the trio's faces tells its own story, as does the response their frenetic groove laden ditties generate out front. They even do an encore for the very first time ever as the first notes of 'Sugar Tastes Like Salt' creates more bedlam among the masses. Essentially three songs condensed into one, 'Sugar Tastes Like Salt' typifies The Orielles ethos to mix and match as many formulas as possible into one gorgeous melting pot then engineer the results, tonight's celebratory performance a joy to behold. The next level awaits.

The best way to cure the previous night's hangover is to indulge in more live music, so Saturday's matinee performance proved to be the perfect prescription. Once again introducing another new arrival to the Heavenly roster in the shape of Maud Nadal aka Halo Maud, her exquisitely crafted dream pop providing a subtle interlude between the previous evening's raucous celebration and this evening's epochal climax. Musically reminiscent of bands like Stereolab, Broadcast and label mates Amber Arcades, Nadal's time as part of Melody's Echo Chamber and Moodoid was well spent. For forty minutes her set ebbs and flows between elegant soundscapes - check out recent single 'Tu Sais Comme Je Suis’ for example - to improvised motorik driven wig outs as ably demonstrated by set closer 'Des Bras'.

Re-energised and fully galvanised for the next installment, we're treated to yet another debut live performance. This time courtesy of 77:78, a band whose music evokes the eclecticism of the Heavenly Jukebox itself. Formed out the ashes of The Bees, debut single 'Love Said (Let's Go)' could be Brian Wilson fronting Dexys Midnight Runners while songs like 'Chilli' and 'The Wagon' owe as much to the halcyon days of Wigan Casino and northern soul as they do late 1960s psychedelia. It's a melange of styles but one that works in a live context such as this. Although still early days just yet, if every performance is as confident and assured as their debut, the sky really is the limit for this ensemble.

Which brings us onto the finale. The icing on the cake. The pièce de résistance. The last time I saw King Gizzard & The Lizard Wizard in a room this size pandemonium ensued. That night saw a power cut in the Crow's Nest at 2015's Glastonbury Festival after several surges and stage invasions from an overly eager audience, so with a similar capacity here and people already perched high on tabletops to secure ideal vantage points anything could happen. Arguably the most prolific band on the planet right now, if not ever, last year saw the septet put out an incredible five albums which might seem ridiculous to some, but exemplifies their work ethic even if question marks remain about overall quality control. Nevertheless, their live shows are always nothing short of being unmissable events, and their rise from playing bottom end toilet circuit venues three years ago to selling out Brixton Academy 72 hours earlier is testament to the unpredictable yet flawless nature of those performances.

Playing for an hour and a half this evening provided the stage doesn't collapse (which it threatens to do so on more than one occasion), the Gizzards as they've affectionately come to be known deliver a twenty song masterclass in musical dexterity that veers from punk rock to thrash metal to textured ambience all bathed in their own Brisbane flavoured psychedelia. With so much material to choose from, putting together a live set is probably the most difficult decision they'll encounter on tour, yet the majority of their back catalogue since signing with Heavenly is represented in one way or another. It starts off fast and furious with last year's 'Rattlesnake' leading the charge but just when you think they've settled into a groove, the pace changes again and again ad infinitum. Such ingenuity is perhaps best demonstrated during the final half hour of the set, where the frenetic opening triplet from 2016's Nonagon Infinity ('Robot Stop', 'Big Fig Wasp', 'Gamma Knife') give way to the blissed out excess of 'The River' and set closer 'God Is In The Rhythm' from the often overlooked Quarters! If any one band captures the essence of Heavenly look no further than King Gizzard & The Lizard.

Believe in magic and it will surely happen. 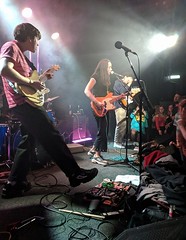