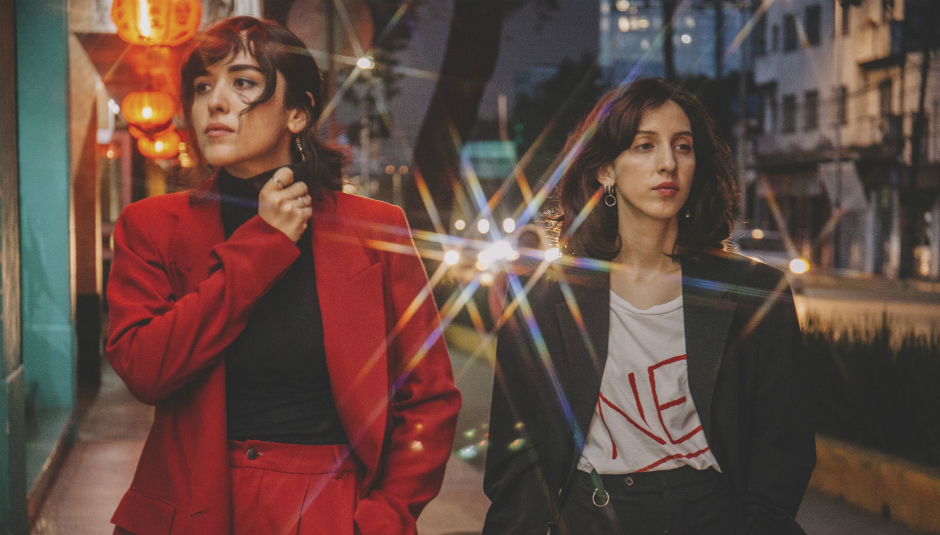 Mint Field - 21-year-olds Estrella Sanchez and Amor Amezcua - talk us through their debut album that nods to everything from dream pop to krautrock to heavy stoner jams to fuzz-saturated shoegaze.

For us, this track feels like a particular moment in life, a very personal but simple moment. It feels like going for a walk and just letting life go the way that nature intended it to. We tried to somehow make the song feel just like this. It was one of the first songs where we used synths, and experimented with drum machines so technically there were some new elements in there for us.

‘Ojos En El Carro’ is about how much our eyes express so much themselves, how you can know someone almost perfectly but at the same time their minds are just in another place and you can see this just by looking at their eyes. The track is special to us, it was one of the first songs we wrote on this album and we feel like it has grown up with us, as we have grown in the process of recording & releasing this album.

'Ciudad Satélite' is a song about our neighborhood, the place we grew up. We think the melody combined with the ambient and moody sounds represent Playas de Tijuana - a very cold, lonely and small place.

This song is about nature and more specifically, trees. It’s about how trees can turn bright and into so many different colours with the different seasons, just like Jacarandas, which is a tree found in a particular part of America. In Mexico City, they are everywhere and in the spring, all the streets all covered by purple petals and when you look up there are so many trees that the sky is covered with purple.

We wrote this song in the studio. We had the principal idea and we had the lyrics but somehow we just couldn’t finish the song. I remember jamming this track and Chris Koltay (our producer) heard us and he told us, “We have to record this song and I´ll make sure it's going to sound just like your t-shirt!” - I was wearing a Neu! shirt. Lyrically, this song is about the horizon, shadows, and how infinite they are; this one is a very contemplative song. The translation would be "I Want Autumn Again".

‘Cambios' is a tough one to describe. It’s just a song about time and how things passed, maybe knowing that in the end it may not be concluded. We think it is simple and just us.

This one is a very special song for the two of us. It’s a track about us, about our relationship as people being connected with ourselves and, more specifically, with each other. We met in high school and it was there that we spoke about wanted to start a band.

This song is like crossing the bridge in the record, it just gives a pause and let everything kind of breath. It has so many sounds. It’s a reflective track, dedicated to our memories and being alive.

'Bootes Void' is a black hole in some place in the universe with lots of new galaxies. We jammed this song for two months and we were super obsessed with playing it, then we turned into a song about 'Bootes Void'.

This song speaks about exactly how the title translates; it’s a track about the fact that nothing is static and it’s forever evolving. In everything, not even in our lives, it’s all about ourselves and going through hard times, but how things can still keep going. In the end, it’s meant to get across that it’s not too difficult being okay and happy; life is not that hard if you try.

‘Club De Chicas' is about some girl club from Tijuana back in the 60’s. We saw a super old newspaper from Tijuana with some super nice ladies in a photo. It was a super cool and interesting picture so we decided to do some research and then write a song about it. This one was also a jam that we really loved and we wanted to turn it into a song. We also find it kind of funny to sing and play a song about some girl club that we’ve never met, nor will ever meet, but we love this one.

'Gali' was Estrella’s dog and her name was Galilea. Basically it'ss a song for her, she passed away. And now she’s in a song so will keep on living with us.

This song is about crying and the sensation. It literally translates as ‘Purple Eyelids’ and is about the look when your eyes are turning into another color while there’s a strong feeling inside of you that you can’t contain.

Into The Shadows: DiS Meets Fabrizio ...