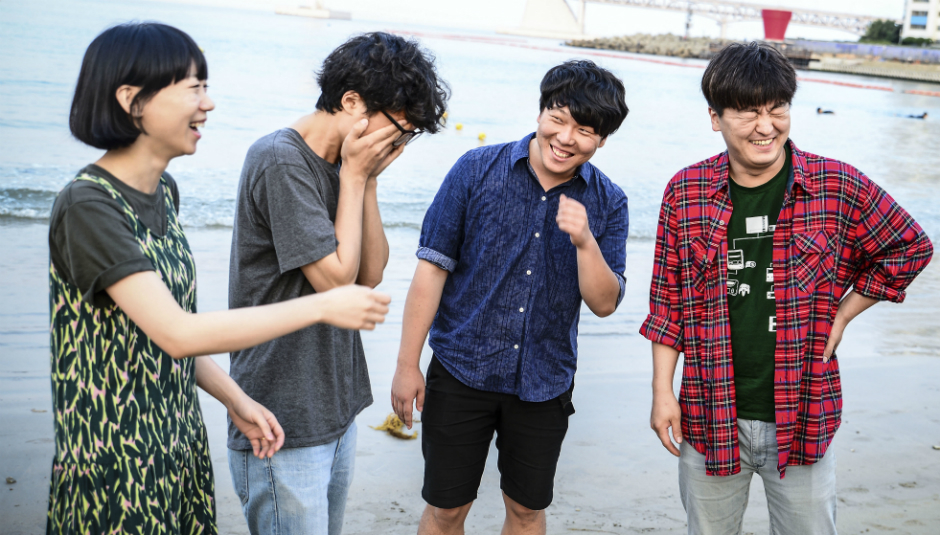 I first stumbled across South Korean band Say Sue Me during a regular dive into the Wonderland that is Bandcamp sometime last year. I can’t recall the origin of that particular rabbit hole, but it was a jaunt that yielded an absolute gem of a find.

Formed in 2012, they released their first album, We’ve Sobered Up in 2014 and the Big Summer Night EP in 2015 via Korean Independent label Electric Muse. They later came to the attention of British indie label Damnably (home to Shonen Knife, Ototboke Beaver, and Wussy), who gave them their first release outside of Korea in the shape of a self-titled compilation that paired their first record and EP.

Just one unabridged play later and I was smitten. It’s a rarity to find surf-inspired, indie rock that feels so utterly unaffected; a record that is absolutely present, and yet perfectly summons youthful concerns, feelings, and attitudes (even if you’re at the point where that seems a distant, hazy memory). From the impish irreverence of the title track to the summit climbing guitar line of ‘Crying Episode’, Say Sue Me’s music has an irrepressible magnetism.

Stricken by their wicked gift for melody, glimmering guitar work, and greedy for more I was happy to discover the band are duly about to follow that up with their second album and were keen to have a chat about it. Skype call arranged I eagerly signed in and found a bunch of smiling faces beaming live from South Korea. We spent a while waving and grinning at each other until the awkward moment dawned: they couldn’t hear a word I was saying.

All lines of possible fixes exhausted we somehow managed, through the power of DIY sign language, to agree that the only course was to use the messaging service. Far from ideal, but they were game, so onwards!

One thing I can confirm is that Say Sue Me have the patience of saints; in spite of my waffly questions and the interminable lag between sending a message and it arriving, they were total troopers.

Generally speaking, genre labels can be overused and reductive, but lead singer and guitarist Sumi (who is at the keyboards’ helm) largely agrees with the term surf-gaze in relation to their sound: “Yeah we've never heard of the words, but we think it fits our music. We like both of the genres.” As for their own inspirations, they certainly fit the thinking: “We really like Yo La Tengo, Pavement, Seam, Grandaddy, My Bloody Valentine… But Metallica too. Lol.” Well, maybe not the last one.

The music Sumi, Byungkyu (guitar and vocals), Jaeyoung (bass), and Changwon (drums) make will no doubt appeal to a generation that experienced those band's first time around, but also to a younger one as the surge in interest in all things 90s continues. The internet has also enabled unfettered access to rock’s back catalogue, which is how Sumi first discovered those groups: “Personally, I listened to them when I was in middle school student. I was looking for classic rock albums through the internet at that time and just listened to over and over again if I got into it. My first idol was Radiohead.”

That tendency towards repetition is revealing, as Say Sue Me play out their well-crafted songs with such dexterity, and yet in spite of that proficiency, there’s a wonderfully guileless quality to their music. A point I fail to express sufficiently.

Sumi: “Oh, do you feel our sound is too natural? We love it. I think I don't like shallow things? ( I learned this word 'shallow' recently). But we're trying to play a more clear sound, and there are some bands we knew in Busan [that] have [a] more natural sound.”

I fumble around trying to explain that the naturalistic production and genuine feel of their music is one of the things I most enjoy about it.

Sumi: “Oh the last sentence must be hard to understand. Hehe, thank you so much.”

Sumi goes on to explain that the unprocessed finish of their debut was, in part, as much a product of circumstance, as it was intentional: “We recorded our first album at our practice room, so we couldn't help that sound was so natural. But as for the second album, we didn't intend to do that kind of sound. I think our music itself makes that kind of feeling.”

She’s not wrong. Their second record Where We Were Together is certainly a more polished affair, which Sumi concedes. “We think recording for this album was totally different with the previous ones. We prepared our demo harder and recorded all at a studio in Seoul.” But unlike some band’s tendency to let studio sheen suck out the lifeblood of their music, Say Sue Me’s character remains intact. There’s certainly further clarity to the recording, and subtle but incisive development as far as the writing is concerned, but still their identity unfaltering.

Similarly, their explanation of how their relationship with Damnably came about is telling: “As far as I remember, George (Damnably label boss) contacted us on Facebook in 2015. He was wondering if we could go SXSW the next year. We thought it's too early for us and refused it.”

Wow. That must have been a pretty difficult decision?

Sumi: “We heard there're so many bands in SXSW, so it's hard to show us well. We needed to prepare more. And then he contacted us again in 2016. He suggested going UK tour with Otoboke Beaver. We thought the timing was good and we accepted that.”

Clearly even in their infancy Say Sue Me were a band with a very strong sense of self. It’s no doubt held them in good stead, not just musically, but also through great sadness.

Their 2017 EP Semin takes its name from, and was created in tribute to, their original drummer who suffered an accident and remains in a semi-comatose state. Alongside the EP the band also raised money for his medical care, and perhaps unsurprisingly the new record includes a number of more contemplative, slightly melancholy tracks: the shimmering instrumental 'The Courage To Become Somebody’s Past’ stands out in particular. Sumi writes all the lyrics and Byungkyu the music, but he is suffering from a cold and has had to slip away, so she says of the track, “Actually he likes those kind of slow things and is inspired by the season. As far as I heard, most slow songs were written in winter. I don't know exactly, but we lost a very good friend of ours last year and I think he wrote about the accident.”

The song may or may not be about Semin, but the depth of feeling expressed on the track is indicative of the richness and breadth of their music that exceeds the micro-focused work of many bands operating in a similar field.

Sumi studied philosophy at university, and while she’s happiest making music, she enjoyed the experience: “I was too lazy to study when I was in school and it was so difficult to me. But It was fun, and I hope it helps to live in this crazy world.”

Things have certainly changed for Say Sue Me, and are likely to get a whole lot crazier, since that first SXSW offer. Sumi has given up her day job and Jaeyoung is soon to follow suit. While Changwon and Byungyu still teach their respective instruments, the band is now their central focus. Subsequently, this year will see them finally make an appearance at SXSW and tour the U.K. again with Otoboke Beaver, which, given that band’s thrillingly merciless music, you would imagine will be a blast.

Sumi: “Actually, they were so quiet! They're cute, but the image was different than we expected. We really like their energy on the stage. So cool.”

And as for the future, Say Sue Me's dreams might seem humble but they reveal a delicate wisdom, much like their music: “We hope we just keep playing our music steadily. No one sick and happy together.”

Where We Were Together is out on 13 April via Damnably. Say Sue Me tour the U.K. in April. For more information about the band, please visit their Bandcamp page.