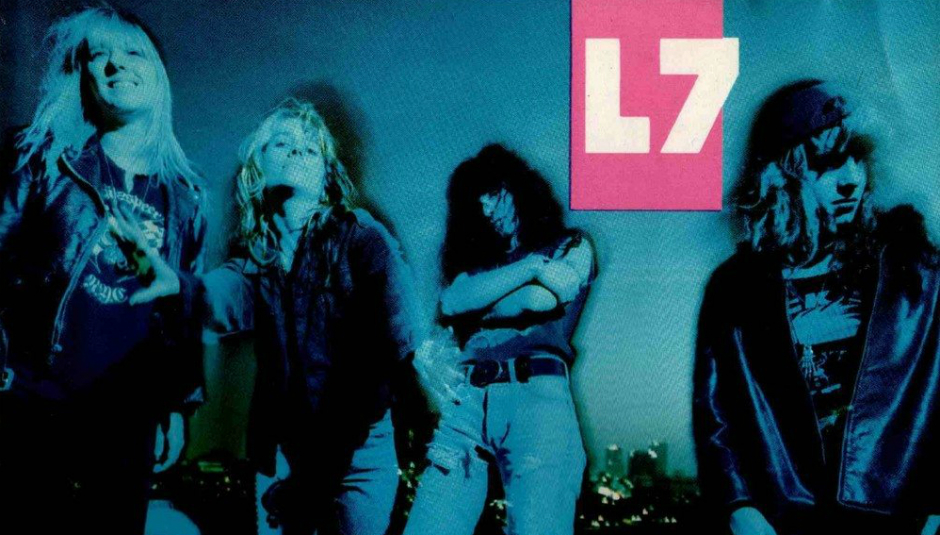 As a sneering, cynical 16-year-old goth, my heart was not easily won. But there was a certain little line on a certain album that had me howling with delight. I didn’t know who the protagonist of 'Fast And Frightening' was but I did know “She’s got so much clit she don’t need no balls”. The kind of lady I wanted to know. This was a band that was going to catapult me into a way of being a woman that was nothing like what I had grown up with. Dee Plakas’ machine gun drumming, leading into the screeching and revving of guitars mimicking motorcycles in the intro still to this day drives me wild. Put this on in rock bar and watch as all the women around you beat their breasts and instantly transform into howling hell demons, I dare you. Donita and Suzi Gardner’s vocals soar from Johnny Rotten R-rolling snarls, to punk rock sneering not unlike Poly Styrene of X-ray spex. This is grunge at its most punk.

These days I have a signed vinyl copy of Smell The Magic framed on my wall. As a just-as-cynical-but-now-30-year-old, I don’t fangirl easily. But this one’s special. I bought it in a record shop years ago with the signatures of all members apart from Donita Sparks. Little did I know, I would later have the opportunity not only to meet that fiercely sharp, relentlessly filthy demi-goddess in person, but actually support her onstage. I would even get to go dancing with her in LA and dance to Iggy Pop until we were blind drunk and the rest is a blur. They always say "never meet your heroes", but what if your heroes are wise, relentlessly authentic women with big, generous hearts like these here axe-slingers and tampon-flingers?

I have always lamented how I discovered L7. A devotee of the weekly music press, my exposure to music was curated almost entirely by those magazines… and they let me down. I was duly introduced to Nirvana (of course), Mudhoney, Melvins and other heroes that taught me to adore a genre I was born just in time to miss out on completely (huh, typical). L7 were conspicuously absent. The only reason I researched them further was because they kept on topping the “most shocking moments in rock history” charts for the Reading Festival tampon lobbing incident or for Donita’s infamous fanny-flashing TV performances. You still hear of male rockers pulling quasi-deviant stunts and they’re almost tedious now, but even in 2018, these inherently female acts haven’t lost their resplendent, scandalous supremacy. Naturally, this made me want to know more, but I was not prepared to hear an album I would adore musically as well. Once I finally got my hands on it, Smell The Magic, their only release on Sub Pop, was one of the fiercest, heaviest most punk rock records I had come across… and actually it still is. As a huge fan of Iggy and the Stooges, I perpetually live in hope of discovering bands who live and breathe the philosophy of Raw Power quite to the same extent. I found one- and they were vagina-bearers. Like me. Also vagina-barers. Not like me. But you get my drift.

L7 didn’t so much saunter into the rock’n’roll sausage party with hot dog buns and condiments, as storm the scene sinking razor sharp teeth into any wieners who stood in their way, infecting the atmosphere with raging lady testosterone. They were fiercer and seedier than any all-male band I had heard before them. L7 were here, shrieking maniacally on their ‘Broomstick[s],’ to rescue me. Their recent documentary details their fledgling days, stumbling from drag shows to poetry readings to heavy metal gigs in LA. A far cry from the dumb rock shock rock band I had been led to believe they were. Lyrically they may seem simplistic at times, but their power is in the irreverence; tongue-firmly-in-cheek. These words aren’t poetry, but livid declarations to be spat and sneered, not crooned… and are often hilarious (see 'Packin’ a Rod' in which Jennifer Finch’s jaunty little bass line leads us straight into a grotesque about what it might feel like to wear a wang). Even legendary movie director and ‘Pope of Trash’ himself, John Waters, recruited them as songbirds for his movie Serial Mom to play fictional band Camel Lips in synthetic pussy-padded leggings.

Shove. Is there an act out there that could be considered less ladylike? It’s all thrusting and elbows. And yet here they are declaring with menace that it is the solution to a whole list of annoyances from bosses to fathers to sleazeballs… oh and America. Shove America as well! This is my favourite track to dance to. It reminds me of the time my friend had her arse groped by a guy at a hardcore gig and we shoved him so hard he hit the floor, laughing in his face as we poured our beers over his stunned face. Did he think we were just going to sit back and take it? Thank you L7.

Another firm favourite is 'Just Like Me', which relentlessly slates the cheese and pomp of LA rock music (namedropping Guns’n’Roses and “pretty, pretty sex things” Vixen) which dominated at the time as they emerge from the 80s, still coughing from the hairspray fumes. As Suzi says in the documentary: “Our generation was about identifying the authentic.”

There is only one track which is forever tinged with sadness for me now. In Donita’s words “One of the first songs Suzi wrote was 'You And Me Til The Wheels Fall Off'... and they did.” In the documentary, L7 describe the frightening decline of their mental health, one by one having to support each other through crashes as the lifestyle began to take its toll. They speak with such honesty and vulnerability that is both touching and humbling to hear. We demand so much of our rock stars, bloodthirsty for their hedonistic declines and then cry or judge when they go too far. This in mind, the pride I feel in my girls that not only did they survive such turbulent times but have now come back even stronger and wiser, is immeasurable.

A slice of sisterly, girl gang effervescence, this album has the power and muscle to drag a girl by the hair straight out of any patriarchy-induced slump. It should be offered up as a cure.

Anatomical Venus by Black Moth is out on 2 March via Candlelight Records. You can watch first single 'Moonbow' here, and for more information about the band, please click here.

The Fangasm: Pornography by The Cure