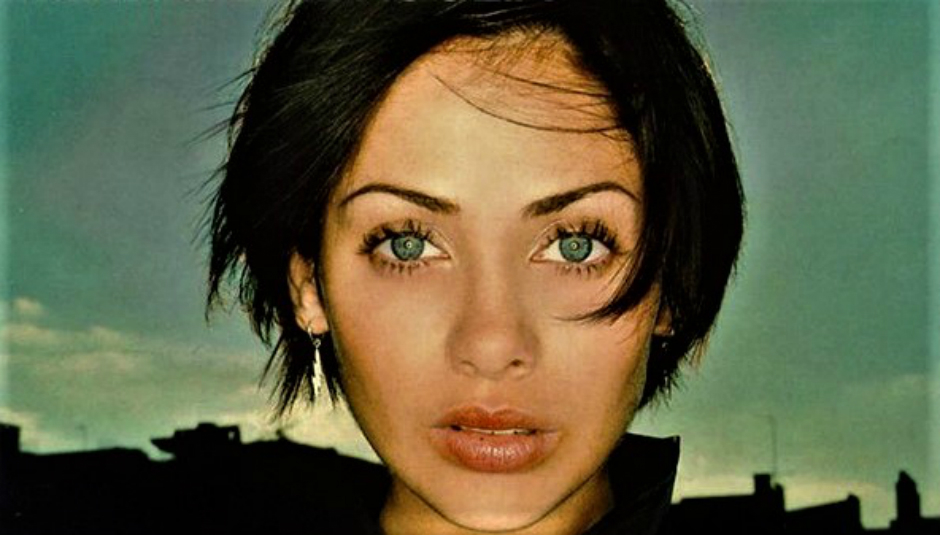 Something interesting happens at the 2:20 mark of the video for ‘Torn’. As the backing vocals guide the song to another immaculate bridge, Natalie Imbruglia looks off-camera, then down at the ground, as if suddenly appearing uncomfortable under the gaze of the lens. The walls of the fake TV studio-style house she is singing from begin to wobble and warp. For fully ten seconds – the equivalent of a lifetime in the average pop clip – she simply stands there looking bereft, fiddling with the sleeves of her oversized hoodie. Then the song kicks back in, and she comes around, fixing her eyes on the viewer again. Manufactured vulnerability it may be, but it is still a remarkable and faintly unnerving sequence to include in a debut video for what became one of the biggest chart hits of the nineties. ‘Torn’ announced the arrival of a pop star who was not only capable of unadorned tenderness but who combined this with an outspoken, no-shit-taking sensibility. Those qualities would become the twin hallmarks of Imbruglia’s career.

‘Torn’ was released in November 1997, peaked at number 2 in the UK, and went on to spend 21 weeks in the Top 40. It was a seriously impressive showing for a debut single – though of course Imbruglia was already a well-known face from her three-year stint in Neighbours, a show that was still pulling in millions of UK viewers. The song itself is a cover, as was recently ‘revealed’ on Twitter: originally written by Scott Cutler, Anne Preven, and Phil Thornalley, members of the band Ednaswap, it was then re-recorded with Imbruglia on vocals. (Thornalley would continue to write with Imbruglia on her debut album).

Its ubiquity has blunted the fact that ‘Torn’ is a properly sad song: a plaintive lament for the shifting sands of a relationship, sung with a maturity and quiet resignation that belies Imbruglia’s 21 years. For myself, as an 11-year-old first getting into music, it was probably among the gloomiest pop songs I’d ever heard. Famously stark lyrics – “I’m cold and I’m ashamed / Bound and broken on the floor” – are framed by production which is also accordingly minimal: those aforementioned backing vocals are key, lending the song a ghostly air, and the simple, soaring guitar part that closes it out – which could so easily have been fumbled or overwrought – feels like a release rather than an indulgence. As a neat, four-minute package, it remains a shining example of near-perfect pop performance.

‘Torn’ crowned what had already been a sensational year for songs written and/or performed by women. As male-dominated Britpop struggled under the weight of its own pomposity – by this stage the big hitters were producing difficult, experimental albums, and bland imitators were rife – a raft of interesting young female pop artists were breaking through, and they had hits to match. Notable tracks included ‘Free’ by Ultra Naté (released in March), Shola Ama’s version of ‘You Might Need Somebody’ (April), the astonishing ‘Bitch’ by Meredith Brooks (May); Aaliyah’s ‘One In A Million’ (also May), and ‘I Know Where It’s At’ and ‘Never Ever’ by All Saints (September and November respectively). These joined other singles from more traditional 90s chart staples including Janet Jackson, Sheryl Crow, Eternal, En Vogue, The Cardigans – and, of course, the ubiquitous Spice Girls. And while it would be churlish to suggest that the latter were entirely responsible for the presence of so many vibrant women in the charts at the tail end of the decade, it surely couldn’t have done any harm; many of the groups formed in the late 90s were a (wholly refreshing) by-product of the major labels’ scramble for the next Geri and co, and they shook up the industry at a time when it was badly needed.

But for Imbruglia, and more recognisably, for her contemporary Meredith Brooks, Alanis Morissette was the primary influence. It would be another year before Morissette released the follow-up to her 1995 monster hit record Jagged Little Pill, and there was an appetite – not to mention an enormous audience – for her confessional guitar-pop. While it might not have been as lyrically interesting as Jagged Little Pill, Imbruglia’s debut album Left Of The Middle, released a month after ‘Torn’, was aimed squarely at those fans. It went straight to number one in Australia, and made the Top 10 in both the UK and US, eventually going on to sell over seven million copies (including a million copies in the UK alone). It is far from perfect, its first half perhaps a little too in thrall to Morissette, with the second half guilty of trying too many styles; Imbruglia co-wrote Left Of The Middle’s twelve tracks with eight different songwriters, and it often sounds like it. Despite its inconsistencies, however, it was to spawn further hits: the raucous ‘Big Mistake’ (probably Imbruglia’s finest vocal performance, and the other true standout on the record) again peaked at number two while ‘Smoke’, a largely forgettable ballad, went to number five. Imbruglia was destined never to achieve quite the same musical successes again, although 2005’s mid-tempo ‘Shiver’ was an undeniably big hit worldwide, and she remains a fondly-thought-of household name.

But it’s ‘Torn’ that stands the test of time: a radio staple, a karaoke favourite (perhaps for the more melancholy participant), and the perfect introduction for millions of fans to an unusually downbeat pop star. Twenty years may have passed since its release, but its unique blend of assertion and vulnerability still renders it as fresh as ever.

The Fangasm: The Boatman's Call by Ni...