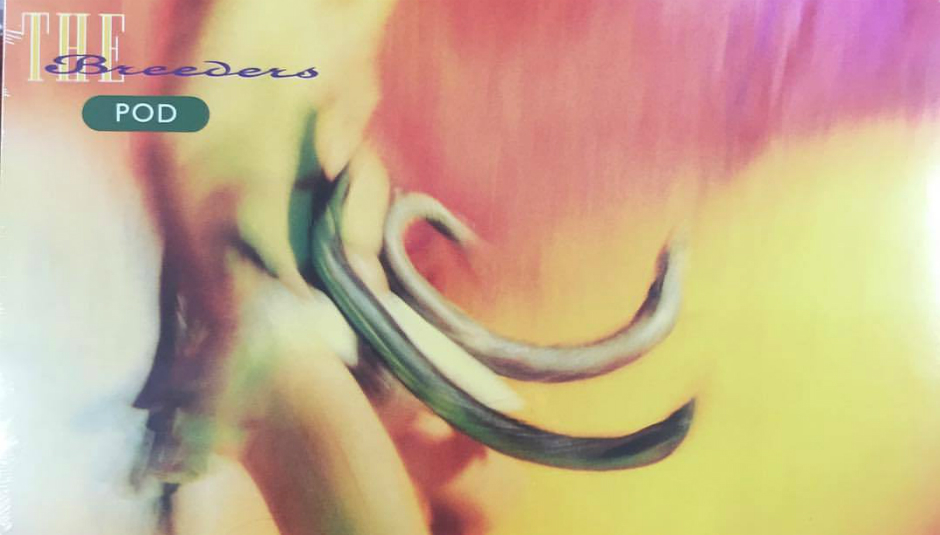 The Fangasm: Pod by The Breeders

The Fangasm: Pod by The Breeders

The idea of getting my best geek on for the Fangasm on a Breeders record is a happy yet troublesome prospect. First, you actually have to choose an album: one album, simple. Well, no. Whilst it's not Sophie's choice, I'll grant you, it’s a challenge. Although The Breeders’ back catalogue mightn’t rival a band like, say, King Gizzard & the Lizard Wizard in terms of quantity (six records in the last three years versus four in 27), sometimes less is more.

The obvious choice for most would be The Weirdest Record To Go Platinum™, more commonly referred to as Last Splash. Indeed, it was my own teenage entry point to the band. Initially seized like so many by the inexplicably strange charm of ‘Cannonball’ as it tumbled out of my radio in the early ‘90s, I remain gripped by the peculiarities of that rollercoaster of an album from top to bottom all these years later.

Then again, I could easily rhapsodise over the musical mood board that is Mountain Battles with its forays into foreign languages, spooky vibes, and some of the Deal sisters most sublime harmonies. Equally, it was so tempting to go off-piste - thus sidestepping making an actual choice - by covering Kim Deal’s interim project, the Amps sole album Pacer. But as I write this it’s nearing the end of festival season, and the thought of delving into that spectacularly booze-soaked record makes my liver shudder: some other time perhaps.

And lest we forget Title TK, which J.R. Moores decreed on this very site is the finest Breeders’ record, the connoisseurs choice no less. Although it's tempting to argue the toss just for shits-and-giggles, I agree... I think. The bottom line is, if I had a gun to my head in some sort of Desert Island Discs/Lord of the Flies scenario, Title TK would accompany me to an almost certain death at the hands of nature and a lack of transferable skills. Alas, he did such a good job of underscoring its unique appeal if folk are still not convinced, I can’t help: we simply don’t speak the same language, ya losers. So, after a pretty illogical process of elimination, I resolved to begin at the beginning with the delectable Pod.

The Breeders grew out of Kim Deal's and, then Throwing Muse, Tanya Donelly’s desire to make a disco record - what I wouldn’t give to have heard that. Instead, what they created, with the help of Slint’s Brit Walford and Perfect Disaster’s Josephine Wiggs, derailed common notions of pop and rock music. The original intention was that the first record would feature Deal’s songs and the second Donelly’s, due to some contractual hoo-ha. Instead, Donelly formed Belly, and The Breeders’ 1990 debut became the first true taste of Deal’s unique songwriting capabilities that would go on to live and breathe through various incantations of the band.

Pod raises its curtains with the slow grind of ‘Glorious’. It’s an odd song to open a record with; the lolloping groove offers as much in the way of fanfare as its elliptical lyrics provide transparency. Whatever Deal is singing about in this sly opener she’s resolute in the fact that it’s "Glorious," repeating the word as she does with unhurried purpose. Intentionally or not, its echo betrays what the next 30-or-so minutes will offer.

By 2002’s Title TK Kim Deal was "leaking pure white noise", but prior to that on Pod, she was toying with a riotous conflux of purity and filth. The Breeders were artfully rude, seeming not to give two hoots about expectation, or have any apprehension when it came to singing songs littered with sexual references.

Her sweet ’n’ salty vocal rivals dirty lyrics in delicious fashion. But this mischievousness shouldn’t come as a surprise, this is the woman who brought "BIG, BIG love" to the Pixies oeuvre after all. Nevertheless, Pod isn’t overwhelmed by carnal predilections either. It somehow wears its lyrical themes lightly, nonchalantly even, without forfeiting an ounce legitimacy. In part that’s due to the impressionistic nature of Deal’s word play. In lesser hands, this type of lyrical wrangling becomes prosaic, boring and tawdry (hello Cigarettes After Sex).

One point amongst many that I agree with in Moores’ piece, is that you don't have to understand what a lyricist is saying for it to move you. Deal’s lyrics are often oblique, avoiding patronising plain speak; they’re not rooted, make sense of them in your own way, plant them where and how you wish.

Now, to this day I’m not sure whether Deal sings "Trumpets" or "Top this" at the beginning of ‘Doe’. I’d like to think it’s the latter, only because the following line goes, "Da-da…da da / Da da da / Oh ho / Tripping", which is basically like saying: "I don’t even need actual lyrics to open this blistering tune I’ve crafted, motherfuckers" (a cheeky move she would later mirror on ‘Huffer’s "Da da, da da, da da daa’s"). It’s probably trumpets, or neither; anyhow, what Doe is is pristine. It’s so lean it’s a wonder Walford’s spare and brawny beats, Wiggs' rangy bass, and Deal’s urgent cries of "It’s all salty!" don’t all collapse into spent heap. ‘Doe’ thrillingly walks a tightrope that’s only safely negotiated as the final seconds play out.

Pod has a pace and litheness like none of their other work. Its limber musicality fucks with the listener from the offset. The structurally strange ‘When I Was a Painter’ breaks and builds, stops then starts. A somnambulant bass line and Donelly’s grinding guitar appear then vanish… then return… the violin lunges, Deal is all mellifluous verses one minute then demanding "Go, go, go!" the next. Christ. It’s dizzying, confusing music that makes you feel quite lightheaded. Equally, 'Hellbound’s rolling, jaunty chorus seems a little curious given it’s reportedly about a failed abortion - "It lives / In folds of red and steamy air / It lives / In misery" - but then they consistently sidestep expectation in captivating ways.

Take their cover of The Beatles ‘Happiness Is a Warm Gun’, which begins with a fag being lit, and ends with impertinent feedback, so brazenly unconcerned they are tackling the most hallowed of bands. And let it be said their cover has an urgency and playfulness not apparent on the original. Donelly’s riffs puncture the air violently, the chorus is played out more frantically. Obviously, I’m not gonna explicitly say it’s better than the original - that sort of shit gets you lynched (yawn) - but, you know… Incidentally, the Safari EP, which arrived two years after Pod, featured Donelly for the last time and a stonking cover of The Who’s ‘So Sad About Us’, which I’d posit - not even slightly apprehensively - pisses all over the original, not to mention The Jam’s cover version.

The record preserves a weightlessness throughout, and is never beholden to or buckled by extraneous influence or pressure. Undoubtedly, Albini’s production is, in a part, responsible for its immediacy. The air created around each element achieves a realism not found in the plethora of albums in thrall to studio trickery and embellishments. Donelly had a keen sense of the album's purity, describing it thus: "I think of all the records I've made, that one is the truest... It feels exactly the way it was when we were doing it." Pod is a rich world created within a sparse framework. It’s populated with eccentric touches like the mid-track raspberry blowing of ‘Iris’ and indiscernible background chatter on ‘Metal Man’ (which also finds Wigg’s redefining deadpan with a wonderfully English delivery of "That’s hot"). This is music made by human beings interacting with each other in real time, and you can feel it.

Pod balances a fine line between being both explicit and magical. There’s a thrilling tension between the fierce dissonance of tracks like ‘Iris’ and the charm of moments like ‘Only in Threes’ ladder climbing melody that’s unique. Amongst that confluence of opposing forces, their potent spirit erupts through joyful noise. The Breeders offered a vibrant sensory alternative to the often fervent hand-wringing of the grunge scene that rose up around both Pod and Last Splash (a buzz that was further aided by Deal’s shit eating grin). Although they were often lumped in with grunge, riot grrrl, and the vague and ubiquitous notion of alt-rock, like all the best bands, they transcended the scenes they were affiliated with immediately.

The Breeders remain as indeterminable as their sanguine debut record sounds box fresh, and bear in mind this was just the beginning. Each iteration of the band has yielded different treasures; we’d have to wait for Last Splash to experience the Deal sisters' beguiling harmonies, and then to Title TK for a vivid sense of the intervening years, and of life lived intensely. A sadness creeps in that had yet to reveal itself, and added complexities began to replace the simplicity of youth.

Ultimately, nobody writes songs like Kim Deal. They’re fucking weird: remarkably and bracingly weird. I wouldn't claim to really know what the songs on this debut record are about. But I do know that if Title TK would soundtrack my final moments, Pod would score the happiest. It’s all salty… it's good… it's real… it's pretty. Crucially, it’s real. It’s really real. And that’s hot.