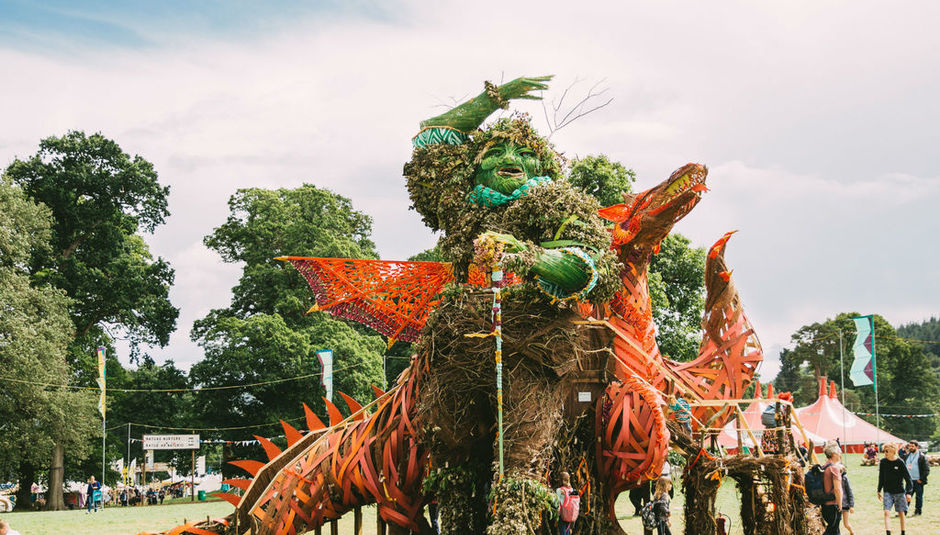 It’s easy to get caught up in Green Man’s own excitement over its fifteenth birthday this year. Set in the unbeatable surroundings of the Brecon Beacons, and delivering the highest calibre in folk-cum-general-alternative, it’s a festival which has built an unusually devoted audience. From humble beginnings of a couple of hundred people for a one-day festival, the present day iteration is now just the centrepiece to so many spin-off boat parties, beer festivals and St David’s Day celebrations. And it’s done all this without compromising on the quality of the music or the experience for their audience. It deserves the celebration it’s getting.

The glitter is on. The cider is good. The sun is (often) out. And walking around the site, it’s so great to see a festival of this size and ambition which an audience can feel truly a part of, rather than simply attending. There’s a warm sense of ownership shared by everyone who comes along. For me, it’s my tenth year. I’ve been attending since I was a teenager, living in Crickhowell at the time. Although I’ve moved away, I never fail to make the journey back to south Wales, and I’m never failed to be moved by the power of the landscape, and how wonderful it is to have such a cornucopia of delights plonked into it for a weekend in August.

As is typically Green Man’s style, it’s difficult to condense the highlights. Thursday boasted probably its strongest run of first-night music yet, with the fantastically talented Anna Meredith stealing the show. Her intricate compositions would be weighed down by complexity in lesser hands, but her set is alive with character. Friday night Far Out headliner Kate Tempest performed her opus Let Them Eat Chaos in its entirety, letting the full force of the album’s story surge through the tent, capturing our country and condition perfectly. And Sunday night’s closing moments on the Mountain Stage were Green Man at its cinematic finest: The Shins’ fine blend of folk-pop and soundscapes at the light fell, followed by PJ Harvey’s elegant and intense career-spanning set to close.

Of course, as has so often been the case over the years of Green Man, many of the truly unforgettable moments were tucked away in the nooks and crannies of the bill.Melt Yourself Down headlined the Walled Garden stage on Saturday, exploding into life with their blend of north African jazz and east London trends, inciting a wonderful, fist-pumping party. Liars pulled out a career-defining set, reaching across their sprawling discography to create something impossibly cohesive and punishingly visceral. And the amazing Richard Dawson appeared with a full band to demonstrate that he’s one of the country’s most exciting and accomplished musicians recording today, blending atonal jazz with ancient English folk to create a truly singular collection of songs in this year’s Peasant.

Sadly however, there were some uncharacteristic blunders in the programming this year. Typically, Green Man's organisers are master curators, knowing exactly how a day of music should unfold as a lived experience, rather than just how it looks on a poster to shift tickets. But the arc of this weekend lacked a certain definition, thanks to some strange placements of bands, and even more uncharacteristic sound issues. Jessica Pratt - who produced one of last year’s finest records - didn’t work on the main stage in the early afternoon, drowned out by relaxed chatter. Shirley Collins - a true delight and treasure - was squandered by her timing, failing to fight for attention. And Lambchop may as well not have played.

It’s a shame to have to say so for this much-vaunted fifteenth birthday spectacular, but on balance, this was probably one of the weaker Green Man outings of recent years, in terms of both firepower on its line up, along with how it actually unfolded in practice. It didn’t help that the organisers drew extra attention and scrutiny by making an absolutely massive deal over of the anniversary and the raft of delights they had in store in their early promo work, resulting in a classic case of overpromising (A FIFTEENTH BIRTHDAY EXTRAVAGANZA!) and under delivering (Future Islands). In reality, it was a good-not-great entry in Green Man’s oeuvre. A perfectly brilliant weekend, but not one of their classics by any means.

Of course, such grumbles only emerge when you’re measuring this year’s effort against the impossibly lofty heights of Green Man at it’s wonderous best. And to be delivering at more or less the same outrageously good standard for fifteen years now, it’s easy to forgive a year that’s slightly off the pulse, and even easier to understand (and share in) the outpouring of goodwill at the ritualistic burning of the Green Man, with a rousing rendition of 'happy birthday' from old regulars and new revelers alike, with fireworks exploding across the sky. This was the fifteenth Green Man, an achievement in itself for a medium sized festival at the moment. And I still love it with all my heart. If they’re up for it, I’m up for another 15 too.