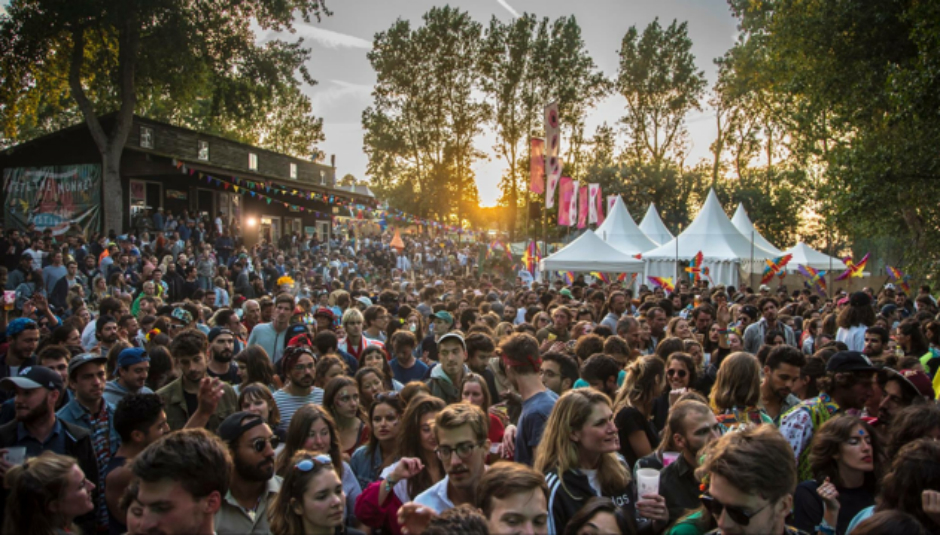 Every great festival needs a great story and, in the annals of great festival stories, Pete The Monkey’s is perhaps the greatest of all. In 2009, Louis Dumas was volunteering at the Jacj Cuisi monkey sanctuary in Bolivia and, whilst there, shot a short video of a monkey called Pete washing up some dishes. The video unexpectedly went viral and, inspired by the reaction, Louis and his brother Rob decided to start a party where all the proceeds went to Jacj Cuisi. Their first event was a 350-person soiree in 2012 and, five years later, the sellout Pete The Monkey has now grown to 2,500 people with four stages and a reputation as one of the continent’s most loved, under-the-radar boutique festivals. See?! Isn’t that great! It’s a great festival story!

Thankfully, Pete The Monkey is much more than just a cute tale and is, in fact, faultless in so many ways it would be churlish not to count them. So let’s go.

First: l’atmosphere. Basically, everyone we meet is from France, more specifically from Paris, and most of them so good-looking you want to smear sweet buttery pastries all over their elegantly glittered faces. But of course we don’t do this; mostly because it would be the height of impolitesse, but also because these chiselled Parisians are all so fucking nice. Obviously, I know most people are nice at festivals—V Festival notwithstanding—but in England this is because everyone’s so off their vajazzle on Tuborg and balloons that for 72 mud-splattered hours they forget the fact they’re piling up debt to continue living in a country they despise. But it’s different at Pete’s; for one thing, when you converse with people you get the impression they’re listening to you. Actually listening, as opposed to killing time until the Mystery Jets play, or wondering if you’re the one bloke here with enough gak to share around.

When we bump into people the next day—which we always do and helps engender that true sense of community that you just can’t create at a bigger event—they greet you with smiles and two-cheek kisses, before reflecting on a conversation that I, as an Englishman who thinks nothing of drowning his sadness at the bottom of a glass, would recall hazily at best. An example: on Thursday, my friend Mike and I have an in-depth conversation about 00s French tennis players with two excellent men called Hugo and Sebastien. We bump into both of them the next afternoon and segue seamlessly into comparing the unfulfilled careers of Tim Henman and Greg Rusedski. Now, I realise that if you’re not a tennis fan (and maybe even if you are) then these conversations will seem like the most heinous example of wasted oxygen since The Wanted, but to us, it felt like a symbol of camaraderie. More than that: fraternitie.

This isn’t to say that people aren’t cutting loose at Pete The Monkey, and as the days clatter into night you spot plenty of wobbly jaws and oscillating eyeballs, especially around the woods. But it’s not the be all and end all, and the days, if anything, are a family-friendly affair where you'll spot plenty of kids bopping around with silent disco headphones on. One of the festival organisers, Victor, tells me that a lot of them are locals who they invite along, and it gives the festival a definite sense of day and night, rather than just perpetual sesh. Anyway. Enough of this.

Second: the size! I like getting lost in a festival but the compact size of Pete’s means you’re never more than 300 metres from one end of the site. This means you don’t get home needing a deep tissue leg massage, though when you check your Health app on the iPhone it also means you haven’t done 30,000 steps a day, a la Glastonbury. So it’s swings and roundabouts, really.

Third: le voyage. I live in Brighton, so come via ferry from Newhaven to Dieppe, from which it’s a 30 minutes bus ride to the site. I have since decided that ferries are unquestionably the most relaxing way to descend on a festival. You can snooze comfortably, you can stretch those pins, you can surf the salty waves of the vessel’s free wi-fi. There’s a well-stocked bar which you can plunder without having to worry about asking some bolshy bus driver to stop so you can have a slash on the A13. If it’s nice you can go on deck, chat to the other festival-goers. Smoke, if you like! In the grand scheme of ways to reach your festival, I think it goes like this: ferry > train > car > bus. Coming back: car > ferry > train > bus.

Fourth: the location! The festival takes place in an impossibly pretty village called Saint-Aubin-sur-Mer, dotted into the green and hilly breast of Normandy. There’s really not much there except for houses, mooing bovine, and a beach. In reality, spending three days on the same quite-small site could get a bit samey but the beach is 150 metres from the festival and therefore perfect for early afternoon hangs and hangover kills. If I went again, I would 100% book into a local Airbnb after the festival and spend a few days amongst the cows and eating all the Neufchatel I could stomach with getting gout.

Fifth: the glitter. If you're one of those people who thinks glitter-wearing at festivals is the height of Millennial festival douchiness, then the glitter grouch inside you will ascend new levels of rage at Pete The Monkey. Percentage-wise, at least 70% of the people here were painted up; largely thanks to the efforts of a British artist called Amy Brown and her team of glitter queens. These days, most festivals have an array of people offering glitter for £5 a pop, but here they are doing it for free—though subsided by the festival—and it’s just one of any number of incremental things the organisers do that have a huge effect on the overall composition of the vibes. Have that, glitter grouch.

Sixth: the music. The line-up here is dominated by buzzy French bands, though they bagged Songhoy Blues and electronic legend Etienne de Crecy as headliners. On Friday, we watch a group of seven Peruvian brothers called Las Wemblers de Iquitos bring the crowd to the brink of Gallic insanity with their Amazonian cumba. You’d say Amazonian cumba is a South American cousin of Balkan folk, which is the music du jour for the alternative European festival. Later there’s all sorts of tech-house, afrobeat, disco and other things I could pretend to remember with clarity.

Seventh: the bars. They have a bar in the center of the site with mini-hammocks, which you end up having to share and have a conversation for an hour about Emmanuel Macron or your hat or tennis or something. Communal places like this, for me, are the centrifugal points around which every festival turns. I feel like we’ve been down this road already. Let’s move on.

Eight: the gang. I’m a festival geek, thus am always interested in what’s going on behind the scenes and how a team of people with normal jobs and lives give an absolute fuck-chunk of their time up so that a bunch of beautiful French people and some English dicks can throw on some glitter in the name of amusement. But when you speak to the guys that make this festival chug – Rob, Dimitri, Victor, Pauline, Louis and over 200 volunteers – everyone absolutely buys into it and is grateful for the chance to be part of it. How do they do it?

Victor tells me it’s because they look after everyone, which is clearly important (they even have a parade on the final day for all the artists and volunteers.). And the fact it’s not-for-profit blatantly helps. But I also think everyone realizes just how lovingly curated Pete The Monkey is. I know I’ve been a bit slapdash with reflections on the music—read into that what you will—but Victor spends a good half hour taking us through who we should see and it’s clear that they don’t just book acts for the sake of filling a bill; they do it because they believe in them. This attitude is mirrored in everything they do: infrastructure, food, artists, kooky French cabaret acts, even the free festival magazine they gave out was nicely-written and actually funny (well, the English bit of it was).

I guess it makes complete sense; if you’re giving up all your free time to create a temporary utopia of indulgence and bonhomie, then you might as well do it right. All great festivals might have a great story, but without the passion of everyone involved that’s all it’ll ever be. Thankfully, Pete The Monkey is much more than just a cute monkey washing dishes.

For more information about Pete the Monkey, please visit the festival’s official website.