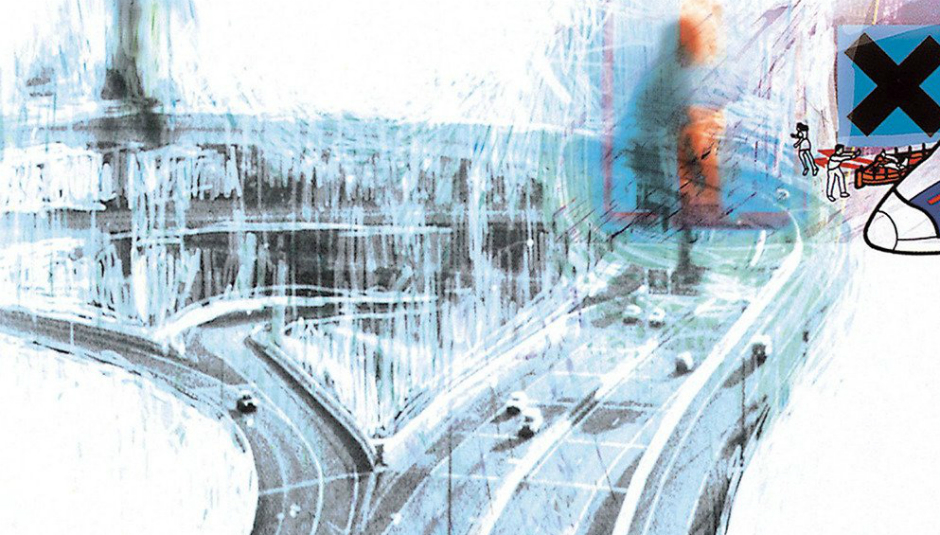 I was a young teenager when I trudged across the Glastonbury mud towards the Pyramid Stage in 1997. It was a typical Glastonbury rain-soaked deluge and this was my first festival. Terrified at the size and scale, cold and tired, I was still determined to get to the stage where my favourite band were playing. Just a few weeks earlier, Radiohead had released their third album, OK Computer and even then, as a gawky kid who really knew fuck all about music, I had an overwhelming feeling that the CD I’d played continuously over the past few weeks to the upmost annoyance of my parents was something very special indeed. I still do, twenty years later.

I was there with Radiohead for Pablo Honey – yes, I know it kinda sucked – but it did still have the grungy ‘Creep’, the first song of Radiohead’s I’d heard and loved. It brought me to The Bends, which took me to ‘Paranoid Android’, a song I heard Steve Lamacq play on Radio 1 for weeks when I got home from school. I taped it and played it repeatedly – all the while wondering how something could be so impossibly perfect. Britpop had started to die its long, slow death, and here was an album simply light years ahead of anything Radiohead’s contemporaries were making.

Of course, in 1997 I didn’t really understand the finer meanings of OK Computer as I listened to it repeatedly in my bedroom. I knew that I understood the confusion on ‘Paranoid Android’ and I knew that playing the ‘The Tourist’ would make me feel like it was okay to get lost in a grown-up lullaby for a few minutes. Yet at that time, my young teenage mind could only cope with melodies and arrangements – nothing more.

I couldn’t explain how I was entirely transfixed on the album. The ‘Bohemian Rhapsody’-like structure of ‘Paranoid Android’ alongside the tender simplicity of ‘No Surprises’; the rage of ‘Karma Police’ against the beauty of ‘Let Down.’ OK Computer was an album of exquisite musical juxtapositions and extremes, all the while reflecting the thoughts of a band trying to fathom the brave new computerised millennium then just three years away.

When Radiohead took to the rain-soaked stage at Glastonbury in 1997, no one knew the performance would later be considered the best in their career and indeed one of the most renowned in the long history of Glastonbury Festival. Yorke wasn’t even going to play the gig originally. Tired and exhausted after extensive touring and recording, he was emotionally overwhelmed and wanted to rest. That period of rest took a further two years to happen (he recently described himself as “catatonic” by the end of it) but it was clear the emotional wretchedness and anxiety so prevalent in OK Computer was something also prevalent in Yorke on stage that night.

Marred by repeated technical issues, Yorke was ready to abandon the gig and walk off. He seemed to be proverbially drowning, ‘No Surprises’ style, in emotion and anguish. But convinced by Ed O’Brian to stay on stage and complete the performance, Yorke’s delivery was gut-wrenchingly emotive and resilient. My teenage-self grew up a lot watching that gig and I was suddenly able to match melody to emotion: this was an album about personal and social anxiety and of having the strength to overcome that anxiety.

As the next few months went on, I knew I wanted to study English language and literature at university and suddenly everything became about words. I lost OK Computer for a couple of months in between discovering Mansun and Garbage, but by Christmas, I’d gone back to it, deconstructing the whole goddamn thing, word for word. As I now knew what a metaphor and a simile were, I figured I could work out exactly what Thom meant on ‘Subterranean Homesick Alien’, even if Melody Maker couldn’t. I also knew, from seeing them perform it live, that a lot of what Yorke was singing about suddenly started to chime with me in a way it never had previously.

See, I entered a dark cave during the autumn of my fifteenth year. I started to hate school. I hated its rigidity, it’s “belligerent ghouls run Manchester schools” atmosphere (this was a school in Greater Manchester, after all) and I hated being bullied every single day by the rich kids. I hated their comments about the place I came from, their quips about my appearance, and the jibes about me always getting top grades.

It didn’t stop there. I started to despise the teachers who failed to protect me, their lessons, the homework, the assignments. Back home, both of my parents were working every hour they could as both attempted to rebuild their lives destroyed in the late 80’s under Thatcher’s government. Both lost their jobs, and we nearly lost our home. Financially we were still on a precipice and as hard as they tried to hide it, I knew we were one bad pay cheque away from repossession.

Something suddenly broke in me; a nadir hit. At 15, I started to suffer from anxiety and a debilitating, dark, depression: each day was like walking through a thick, disorientating fog without a torch. I started to skive school. I couldn’t stand to be bullied a moment longer, nor could I stand to be in classes the teachers couldn’t control. Neither could I bear to be in lessons which bored me to fucking tears. My school was, in no uncertain terms, really fucking bad.

I decided to spend the remainder of my first year of GCSE study reading books and listening to music instead of attending school. I spent days getting lost in ‘Subterranean Homesick Alien’ instead of completing the geography coursework now three weeks overdue. What was previously a nice sounding song to me now had a new significance. I identified with every word Yorke sang: I was tired of being isolated and different to my fellow students. I wanted something, anything, to take me away from it all: Yorke wished for aliens, I wished for opportunity. Something better than all of this.

For kids from my estate, there were two options: get married and have a child by 20, or get married and have a child by 20. There wasn’t much of an option in the middle. I wanted to write and I wanted to spend every day of my life writing, listening to music, and attending gigs and writing about all that music. I wanted to go to university to study English and I wanted to escape a world which, at fifteen years old, had managed to completely and entirely grind me to a halt. Everything seemed so utterly fucking impossible: how could a working class kid like me grow up to be a writer? 1997's “education, education, education” rang hollow by the following Spring.

‘Let Down’ reflected the vacancy of that time in my head. Everything was emotionless – even the days when the depression eased and I actually managed to feel some sort of emotion, those emotions didn’t seem real. ‘Karma Police’s refrain, “I lost myself”, somehow seemed more real because I had lost myself: I was entirely adrift. I was unrecognisable not just to myself, but to my parents and to my friends who no longer knew where I had gone. I stopped looking after myself too. I dropped to a very worrying weight, stopped getting my hair cut so my fringe was half way down my face, and I stopped seeing my friends entirely. My only real interactions were with the music in my ears and the worlds in the books I read. My thoughts were getting darker as each day went on. “What was the point?” became a persistent question in my head on waking and sleeping.

It was a Saturday morning when the video for ‘No Surprises’ played on TV and the letter landed on the doorstep. The secret was out: a non-attendance at school letter sent to my parents into a worried spin. The lullaby-like melody somehow made it okay and safe to talk today even if I did feel I was drowning in the tears that suddenly poured from me for the first time in over a year. I told them everything, and I remembered how Yorke showed people on the Pyramid Stage in 1997 that it was okay to fuck up and recover. Somehow, if only momentarily, I was safe.

My mum called the doctor and my dad told me I never had to go back to the awful shithole of a school again. We worked hard to find an alternative school and by the end of the following week, my parents enrolled me in a college to sit the GCSE’s I actually wanted to sit. The very fact it took my school four months to let my parents know I hadn’t been attending school said it all. They were my ‘Lucky’, my ‘Airbag’, I thought, the superheroes pulling me out of the proverbial car crash I found myself in. I got help, cut my hair, and enrolled at college.

OK Computer was with me all the way through the recovery – because OK Computer is an album about survival, of tenacity, of fearing the unknown but facing it head on. ‘Let Down’ became the sunrise instead of the disappointment; ‘No Surprises’ became the calm as my mind found its balance again and I started to smile. ‘Airbag’ reminded me of my parents and their ability to cushion and support the bad days which I still had. Yet no matter how much came at me, I was protected and safe and tenacity would get me through; I knew this because Radiohead were always there, telling me so.

I got straight A’s a year later in all ten of my GCSE’s and later graduated university in between Hail To The Thief and In Rainbows with a first in English. As I stand at Radiohead tonight in Manchester, on the 20th anniversary of OK Computer, I wonder if I would be stood here at all without the album. ‘Let Down’ opens and ‘Karma Police’ closes and I start to cry.

Of course, this isn’t the full story. Back in 2011, I met a man and told him all about my love of Radiohead and OK Computer. I told him it saved my life; he told me The Bends saved his. As I decided right there I was going to spend the rest of my life with him, I never thought six years later he’d be cruelly taken from me twenty years almost to the day I revisited the album I had an inkling might save me. As I sit here and open the reissue, OKNOTOK, listening to ‘I Promise’, I have a feeling this album might save me all over again. Twenty years from now, I’ll let you know how that all went.