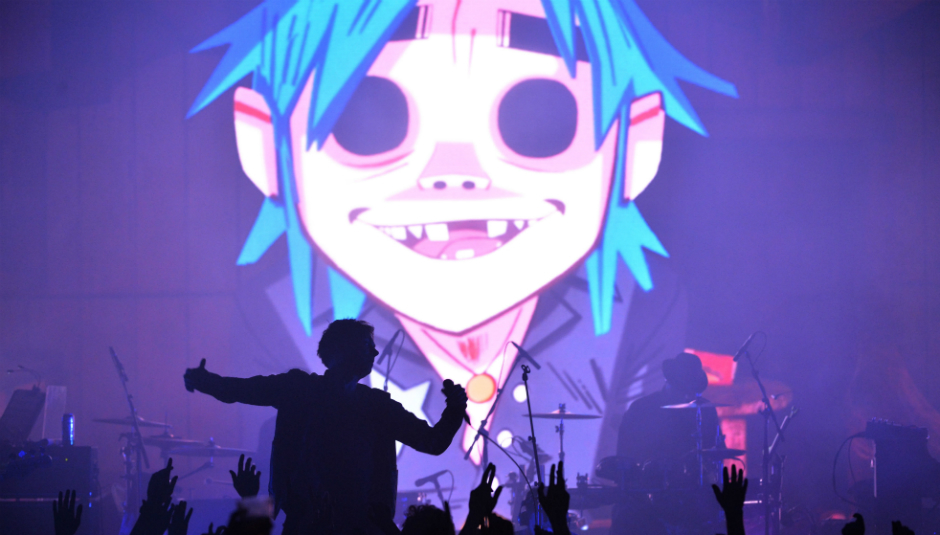 Seven years since Plastic Beach, we’re at a sudden, surprise launch party for a new Gorillaz album; the latest in Albarn’s hot takes on the current state of pop. On first listen, these songs fit the pattern of sounding like a Gorillaz record by virtue of it sounding completely different to the rest of their albums. It's difficult to draw a dotted line from the dour trip-hop of their debut to material like ‘Andromeda’ and ‘Saturnz Barz’. But then, Gorillaz records have always fit more seamlessly into their immediate contemporary context rather than their own discography, and the same sounds true of Humanz.

The most striking thing about tonight’s set - confirming what is hinted at by the four teaser songs already released - is that this is an album packed end to end with bangers. Albarn has never played with as much low end as this, and it works beautifully. The material goes off with pizazz and power, offering the sort of rhythm and physicality which they evidently failed to inject into their infamous Glastonbury set. It opens with the ferocious guest piece from Vince Staples (one of the few contributors absent tonight, sadly) and - astonishingly - more or less manages to keep the pace for the hour which follows it.

You could rattle off a list as long as your arm of obvious contemporary touchstones for the sounds of Humanz (in a sense, it plays a little like a jukebox musical of 2016) but that’s exactly what Albarn has an uncanny knack for doing so well with Gorillaz. Against all odds, the album's always play out as tremendous fun, rather than pastiche, retread, or imitation. And that, of course, is ultimately down to Albarn’s stunning instincts and abilities as a songwriter.

In tonight’s set, Gorillaz finalise the transition from being a solo outlet for Albarn (he’s hardly in want of those anymore) to being an unapologetic carousel of star power partnered with Albarn’s spasmodic, genre-hopping impulses. Tonight we are showered silly with delightful surprises. I have an early swoon when Danny Brown pops out for a verse. For the first time ever (how is this possible?) Del Tha Funkay Homosapien performs Clint Eastwood live with the band. And in a moment which basically proves the multiverse theory to be correct, Noel Gallagher pops out to casually do some backing vocals.

Almost all of these songs have one or more prominent guest stars, relegating Albarn to a featured artist in his own tracks - adding a verse here or there, or a hook for the chorus. It works fantastically. Only one or two songs are vehicles for Albarn alone, and only once does he succumb to his seemingly self-imposed rule that every album he does must have one melancholic, stripped back pretty one, regardless of what surrounds it. And so although I hate to venture an opinion on the record after just one live performance, it does seem likely that Humanz might emerge as their most coherent Gorillaz record, more or less committing itself to one aural concept for its entirety.

In the background, projections of Hewlett’s creations 2D, Russel, Murdoc, and Noodle are delightful and striking, but mainly serve to remind us how far Gorillaz have come from their conceptual origins as a satire of manufactured pop. In the early days, Albarn appeared to resent his public attachment to the project, appearing on stage as a silhouette, and presenting the cartoon band as if they were ‘actually’ the members in the press. When they performed at the Brits in 2002, they did it as massive 3D holograms of the characters. Now that Albarn is less prominent in the music itself, he proudly stalks the stage as the textbook frontman, leaving the sustained fiction of 2D and the gang to fall into a frivolity for social media, running in parallel to the ‘real band’. When they performed on Jools Holland after Plastic Beach, it was just Albarn and the gang with guitars; a bigger Think Tank-era Blur.

I miss the conceptual ambition of the early days, but it’s hard to begrudge Albarn his fun. (Not to mention that it’s now near impossible to sustain the fantasy that Gorillaz could possibly exist as a vocals-guitar-bass-drum outfit). In 2000, Gorillaz satirised pop with an eerie oddity of an album, a million miles away from the trends they were poking fun at. Over the years, they have drifted from this position, culminating in Humanz as an outright celebration of pop, unironically embracing it at its most excessive, immediate and gratifying. Plastic Beach didn’t really manage to generate an obvious single or a big hit. This time round, Albarn might well be spoiled for choice.