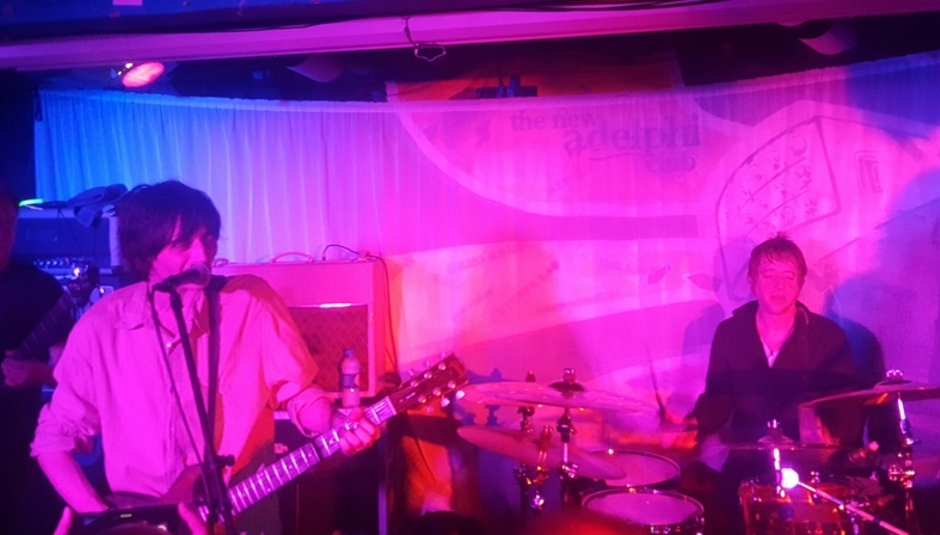 One Night In Hull: The Triumphant Return of Senseless Things

One Night In Hull: The Triumphant Return of Senseless Things

Hull, 2017's European City of Culture and somewhat unlikely setting for the return of one of the biggest cult bands of the 1990s. West London outfit the Senseless Things first emerged in 1987 at a time when word of mouth was the only way new bands would make any kind of headway outside of their own backyards, and in order to attain such traction had to play as many shows as possible. While there are some parallels with today - certainly in terms of instilling a live presence - it was an altogether different ball game back then, and bands like the Senseless Things alongside other tireless stalwarts such as Mega City Four, Kingmaker, and Thousand Yard Stare would literally spend the best part of every year travelling up and down the land in transit vans hoping to play to as many people as possible and maybe even put out a record or two in the process.

Which for Senseless Things paid dividends as not only did they release four critically acclaimed albums alongside a batch of well-received 45s, but also managed to gatecrash the top 20 national singles chart culminating in a Top Of The Pops appearance with 'Easy To Smile', their highest ever chart placing in January 1992.

The four-piece - Mark Keds (vocals/guitar), Ben Harding (guitar/backing vocals), Morgan Nicholls (bass) and Cass Browne (drums) - built up quite a loyal following during their existence before calling it a day in 1995 after the release of fourth and final long player Taking Care Of Business. Disillusioned with the music industry having been jettisoned to the sidelines (along with many other infinitely better bands from back in the day) by Britpop, their back catalogue littered with a host of gems.

The ensuing years saw all four members continue to make music in one form or another, Nicholls most prominently with Muse, Gorillaz, and The Streets, Harding in Three Colours Red, Browne also in Gorillaz as well as Delakota and Penguin Cafe, and Keds briefly with The Wildhearts along with Jolt, The Lams and current band Deadcuts, who also recently recruited Cass Browne on drums. There was almost a Senseless Things reunion in 2007 at a benefit gig for Mega City Four frontman Wiz Brown, who passed away in December of the previous year, but unfortunately, other commitments meant Nicholls couldn't join his three former bandmates and Hitechjet bass player Micky Wyle stood in instead for the short, four-song set in Islington that evening.

So having finally bitten the bullet and joined the ever growing list of reformations last December in announcing a one-off reunion show at Shepherd's Bush Empire 0n 25th March - their first show for 22 years - the four Senseless Things went one further by arranging a secret warm-up gig at Hull's Adelphi six days beforehand (Sunday 19th March). Chosen because of its prominence in the band's tour schedule while at their most active, the Adelphi is one of the last remaining old-school venues from the widely denounced but sorely missed "toilet circuit." Tucked away in between rows of terraced houses in Hull's Kingston area, its played host to anyone and everyone from the Manic Street Preachers and The Stone Roses to Pulp and Oasis plus many more before, in between and after. Indeed its status as one of the warmest and most welcoming settings of its kind makes it a hotbed for gig-goers from all over the British Isles, and tonight's first opportunity to witness the Senseless Things in the flesh for over two decades proves no exception. With many having travelled from various corners of the UK to be among the 200 tightly squeezed into the Adelphi's intimate confines.

Beforehand, its the turn of Midway Still - another band renowned for their past glories on the independent rock circuit, most notably 1992's debut long player Dial Square, which should have launched them as the UK's answer to Nirvana et al. Sadly, the plaudits received by said album never equated to sales and after releasing another record (Life's Too Long) the following year the band broke up in 1994. Having reformed in 2000 with a new bass player they've since put out four albums, last year's Go Team No Hope being the most recent.

Having supported Senseless Things many times back in the day, their choice as openers this evening was perhaps not that surprising. Playing a twelve song set lasting approximately forty minutes in total, Midway Still turned back the clock in style. Mixing newer compositions ('Wicked World', 'Cash Cow', 'No Guarantees') with a selection of more familiar material from back in the day ('I Won't Try', 'Better Than Before', 'Me In You'), their grunge flavoured alt-rock going down a storm with all and sundry, many of whom are resplendent in Senseless Things "Pop Kid" t-shirts and other assorted garments last worn a quarter of a century ago.

Indeed, tonight's show does have a nostalgic feel about it, like a school reunion of sorts, and strangers exchange stories with each other about gig experiences from days of yore. It's a genuine feeling of community that is sadly lacking from the present and as the Senseless Things take to the stage one by one, frontman Keds the last to emerge, they're greeted with a round of cheers reminiscent of the ones normally reserved for victorious sporting heroes.

Having already played a short set in the back room of a Richmond pub some 48 hours earlier, tonight's show proved to be anything but a rehearsal. Playing 24 songs in total covering their entire back catalogue from their very first release (1988's Up And Coming EP) to last month's first new recording in 22 years and current single 'Lost Honey'. This was more a case of unfinished business than an excuse to wallow in nostalgia.

While rumours had been rife on social media of Keds' ill health to the point of speculation he wouldn't be turning up this evening, all four members delivered a flawless execution of songs that deserve to live on. Each and every one of them a timeless reminder of why a band like the Senseless Things were so vital then and are sorely missed now. Often cited as a UK equivalent of Husker Du or The Replacements, the likes of 'Girlfriend' and 'Is It Too Late?' sounding as if they could have been recorded at any time over the past forty years, yet still sound so fresh and invigorating.

Of course, everyone in the room has their own personal favourite and when Mark Keds asks people to shout out requests each duly delivers. While a good 50% of tonight's set focuses on their earlier singles and Postcard CV output - arguably their most productive and ultimately unblemished period - it's also good to see lesser celebrated numbers from their last two albums given a well-received airing, a melancholic 'Watching The Pictures Go' being the pick of that particular bunch.

Unsurprisingly, rabble-rousing renditions of 'Hold It Down' and 'Homophobic Asshole' elicit the most rabid response of the evening, while a three-song encore culminating in debut single 'Too Much Kissing' brings about a stage invasion of sorts.

For ninety minutes, everyone was 19 years of age again. And boy did it feel good. Here's to next weekend's "proper" show at Shepherd's Bush Empire. Hopefully it will be the first of (too) many.

"As a musician you have a certain pow...