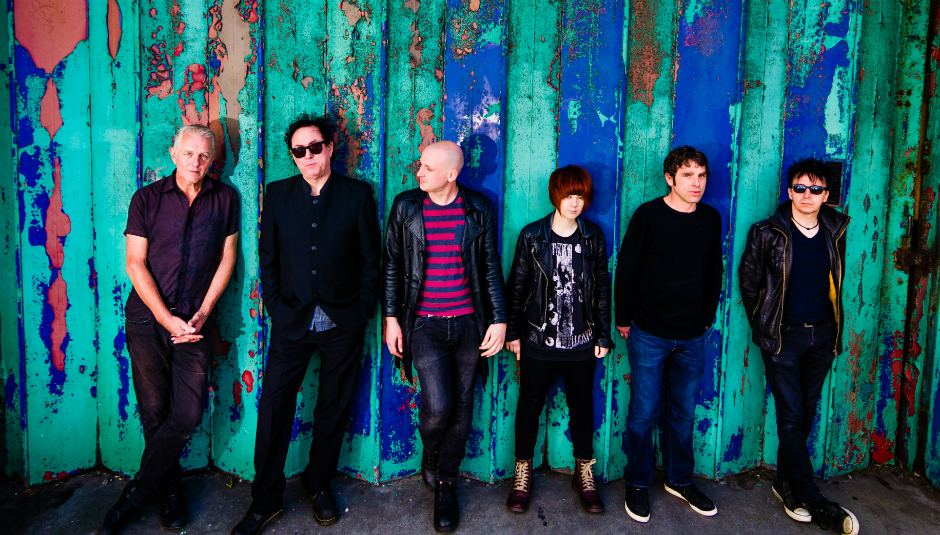 The Blue Aeroplanes' Track By Track Guide to Welcome, Stranger!

The Blue Aeroplanes' Track By Track Guide to Welcome, Stranger!

After a long break that threatened to be more permanent than just a 'hiatus', cult rockers The Blue Aeroplanes are back with their twelfth studio album. Their unique mix of rock, folk, poetry, punk, dance and art has long been an acknowledged influence on a wide range of bands, but such eclecticism came at the price of stability, the band at times seemingly more of a revolving collective than a stable group.

Such times seem to be in the past though, and Welcome, Stranger! was recorded with the the longest-lasting Aeroplanes line up to date. Original members Gerard Langley (poet/singer), and John Langley (drummer), sometimes with Wojtek Dmochowski (dancer), were joined by Gerard Starkie, formerly the main man of Witness and an Aeroplane since 2006, Chris Sharp (bassist and owner of The Fleece venue in Bristol), a band member since 2008, and the more recent additions Bec Jevons (guitarist and front-person of I Destroy) and guitarist Mike Youe,

We sat down with Gerard, who talked us through the making of their latest.

LOOKING FOR X’S ON A MAP

There has been some controversy about the use of an apostrophe in this track. Quite apart from the fact that XS ON A MAP makes no sense, let me point out that X here is an abbreviation of ‘cross’ and the apostrophe is for the missing ‘e’. It is pronounced Xe’s. Formal rules apply to written English. This is spoken English, and therefore the principal rule is to make the sound and the meaning of the word clear. The track itself is about a map to read signals by. How many X’s do you use?

A tune is a tune, whether sung or played on a guitar. Or a synth, come to that. This is a guitar tune with a sweet centre.

There is a street in Bristol called There And Back Again Lane. There’s nothing there and it’s difficult to find because people steal the street sign. This piece is about new love and old love, the waxing and the waning and the getting lost in the wood. It features a Universe with a sense of humour and a thunderbolt. It also features some sixties-style organ and harmonies.

Something that is beautiful but doomed to disappear must be appreciated while it is there to forestall the sense of loss. The words join the dots between crows and Peter Cook’s devil in the film ‘Bedazzled’, as someone was bound to do eventually. The music is a combustible update of the mood thrown up into the air by The Byrds’ ‘So You Wanna Be A Rock & Roll Star’ crossed with ‘Don’t Fear The Reaper’, only with a lot more riffs. And no trumpet.

WALKING UNDER LADDERS FOR A LIVING

Walking under ladders is always the top superstition. People who aren’t superstitious don’t like doing it. This is because in the old, draconian days of rough justice (and who’s to say we’re not heading back there?), when you could be hanged for stealing a loaf of bread, they used to run out of gallows space and hang people from ladders. So you would be walking through the spirits of dead people. How do we move through the space vacated by Lou Reed or Sandy Denny or Leonard Cohen? I don’t know, but we have to.

Based on a true story of hope versus expectation. It’s not the winning, it’s the taking part. Bec came up with the riff, which exactly fitted the phrase, and we finally used a cowbell again. It’s been a while, but generally there aren’t enough cowbells in contemporary music. Or indeed songs featuring Elvis impersonators.

NOTHING WILL EVER HAPPEN IN THE FUTURE

We live in a continuous present. The past and the future are separate countries and the tracks are unreliable there. By the time we actually get anywhere, we’re still here. Our wants, needs and loves trail behind us like puppies, and we use up continents till there’s nothing left to explore. Is that the sound of gunfire, or is it the sound of fireworks? We added strings to this for a kind of cinematic sweep. You can stick around at the end for the post-credits extra.

Bec’s song. I love that idea of welcoming someone into your skin. Identity is increasingly important in an age where many of your friends will be pixels. Woah-oh, absolutely.

HERE IS THE HEART OF ALL WILD THINGS

An opportunity to compare will and intention. Just because something is difficult or unknown doesn’t mean you can’t try. Nature is various and can encompass anything from sensitive guitar-picking to Stooges-like thrashes. Just part of the same thread, the same track, the same destination.

Ronnie Hawkins came up with the idea of ‘Frank Sinatry’ and I kind of had Dan Stuart in mind as Gregory Peck or Gary Cooper. ‘Poetland’ is a land of contrasts, where beautiful sounds and scents accompany the singing of evil children as they throw rocks off motorway bridges. Meanwhile, back at the castle they’ve pulled up the drawbridge and they’re practising very fast guitar runs. Then everything ends with a Beatles chord.

Welcome, Stranger! is out now via Art Star Records. for more information about the band, including upcomng tour dates, please visit their official website.

"Obviously it's a total fucking disas...

"I just want to appreciate it rather ...