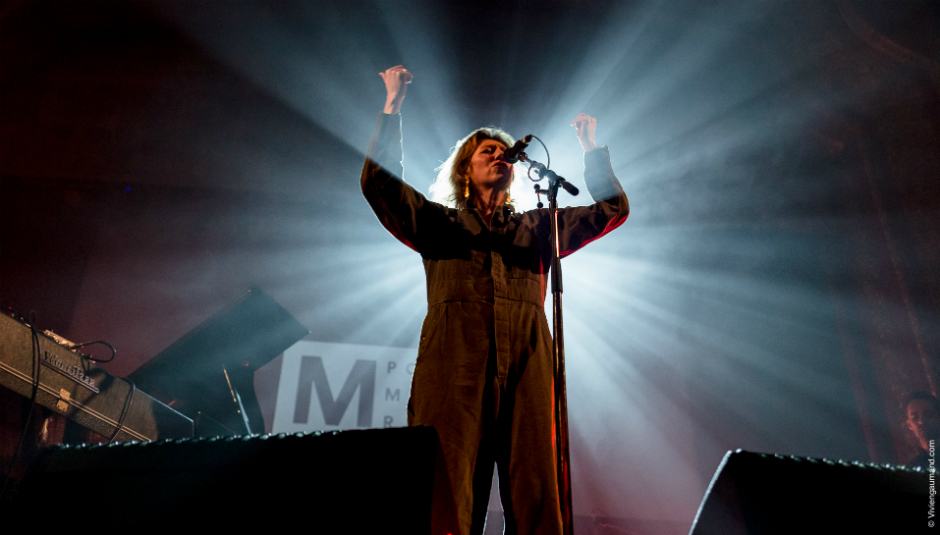 For a city with such a centralized population of 1.65 million people, Montreal is a place that very much punches above its weight when it comes to music, with an alumni so rich, the rest of Canada – nee, the world - almost looks on in envy. The list of names read like a who’s who of indie: Arcade Fire, Martha Wainwright, The Dears, Godspeed! You Black Emperor are just a few to reel off the list.

M For Montreal Festival showcases the best of what the city, as well as the surrounding area, has to offer, in the hope of adding to this illustrious alumni of names above. Spread over 4 days, it’s an opportunity for up-and-comers to showcase their talents on a platform that gives delegates as well as punters from all over the world to see the best of what mostly Canadian artists have to offer.

We also need to bring up the small matter of Leonard Cohen – a memorial near his place of residence in the Saint-Laurent district was adorned with flowers, messages, and candles. There was also a tribute concert at the Rialto Theater shortly after Martha Wainwright had finished her set on the main stage, with local artists getting together to cover various Cohen songs.

On a personal level, despite the new found love I now have for Montreal, there was a time where I thought I may not even enter country and being held up in immigration for nearly 3 hours on the basis of my middle names matching those on their vast database of names on their list. That, and supposed ‘passport issues’. I don’t put it down to racial profiling whatsoever. Nope.

But once I’d arrived and settled in, the following day it was time to go and watch some bands perform. I mean that was why I flew all this way right? So I started off at the grand settings of the Rialto Theater to catch Groenland and Martha Wainwright.

Groenland are a group which mixes Sabrina Halde’s soulful voice with harmonic string arrangements and electro experimentation. Nice to listen to, but is at times a little derivative of other groups that perhaps do what they do a little better.

Martha Wainwright on the other hand plays her set of tunes, mostly from her new album and her two LP’s and EP’s in between attempts at speaking French to her audience before flitting to English. Wainwright has a soaring, powerful voice and is in fine form tonight. After a couple of encores, Martha finishes up with ‘Bloody Motherfucking Asshole’, introducing it as ”The new agenda. Fuck Trump” to rapturous applause.

Hologramme are quite possibly my new favourite band at M For Montreal. An instrumental band and also Montreal natives, they’re reminiscent of early Metronomy and Air. Ethereal, inventive, and imaginative, they’re a breath of French-style electro-pop music in a sea of mostly indie groups. Their hooks are in all the right shapes in all the right places, their song craft is second to none, and they’re easy, pleasurable and a joy to listen to. Hologramme are a wholly recommended listen.

Lee Harvey Osmond is a name you’ll probably hearing a lot more from in 2017 with plans to tour on these shores in the future. No, he didn’t shoot JFK as his real name is Tom Wilson, but he’s a bluesman with a set of lungs on him. Sounding and looking like he had wrestled a bear, he is the former frontman of 90’s band Junkhouse. He is joined by his son onstage with a bass guitar as they play original tunes in the style of bluesman from days of yore.

If you were after a band with plenty of sex appeal, Les Deuxluxes definitely fitted the bill. They are a garage rock duo – again, from Montreal – and a hard pair to ignore as their lead front woman Anna Frances Meyer wears a stunning silver latex suit whilst rocking out two-minute raucous garage songs from their albums, including their latest, Traitement Deuxluxe. They’ve been described by the festival as "mixing glitter and sweat into their fiery blend of rock ‘n’ roll." With such intensity and glamour, we wholeheartedly agree with them.

Staying with noisy affairs, there’s a bit of a buzz and excitement surrounding Toronto-based grunge band, FRIGS. There’s a good reason for this – they’re pretty damn good live. They mix the emotive and evocative grunge of PJ Harvey with interspersions of quiet, then loud, then quiet. Then there’s the psychedelic and grunge influence of Sonic Youth.

From grunge, we switched over to spoken word, storytelling, and acoustic songs with 90’s starlet, Bif Naked. This was a sit-down affair that went on for a couple of hours, with her regaling tales of running away from home with a friend to Toronto in her teenage years, to be an aspiring actress, to how she married her guitarist and how he proposed to Bif Naked in Paris.

The Word Up! Battles have kids queuing up around the block – literally – for French-language hip-hop. For those that don’t speak the native tongue of Montreal, it’s still quite entertaining to see two MC’s in a freestyle battle against one another with some English words thrown in every now and again, referencing Donald Trump. The crowd as mentioned above are pretty young and fresh-faced and as a result proved to be the most attended event at M For Montreal.

Eleven years strong and the festival shows no signs of letting up. If anything, it's going from strength to strength, and a credit to the city of Montreal and its inhabitants. C’est Magnifique.

"We thought we had a chance to change...