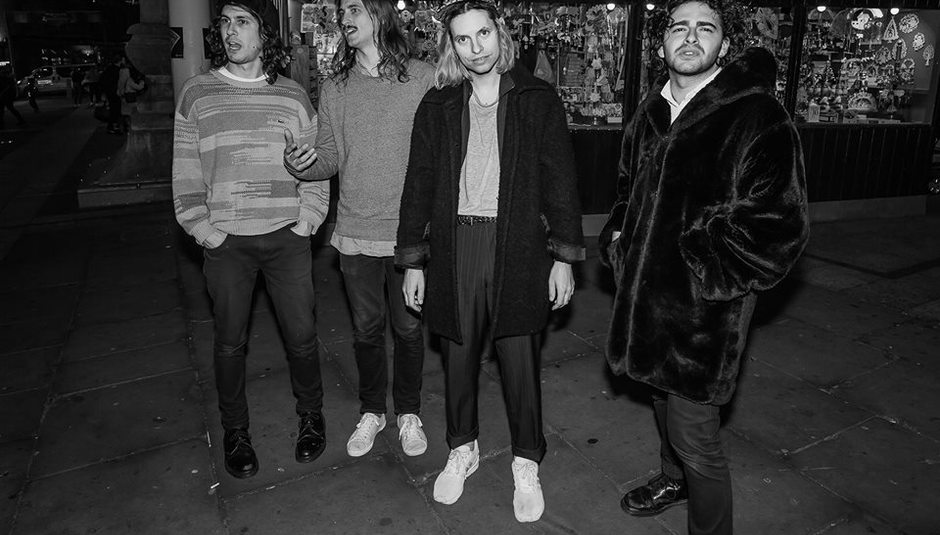 What a difference twelve months makes. This time last year, most people outside of their native Malmo were unaware of Fews. So it's quite a remarkable feat that they'll end 2016 on a sold out European tour with indie rock legends Pixies before heading to the studio to lay down tracks that are hoped to form the basis of a follow-up to May's debut long player Means.

Tonight they'll play to an enthusiastic audience at Leeds Academy, all of whom may be here for the headliners, but the majority are undeniably converted to Fews' rapidly growing fanclub by the time 'Ill' closes their set. Afterwards, vocalist/guitar player David Alexander told DiS about the band's incredible year and their plans for 2017.


DiS: 2016 has been an incredible year for Fews, starting with the Eurosonic show in January, then the Spring Tour in February, onto releasing your debut album in May through festival season culminating in the Pixies support slot in November and December.

David Alexander: Definitely! It was pretty much exactly one year ago when things started to take off. We did some shows before that but it was around this time we recorded our album and everything started to build from there. Having Craig (Caukill) as a manager, having a great producer in Dan Carey, having magazines and blogs like yourselves supporting us. We've had lots of support from loads of different people.

The band's reputation has spread by word of mouth, which is a throwback to how bands used to get recognised before the internet.

DA: It has. I think the Spring King tour was an important one for us. Most people didn't know us before those shows, but many of them have come back to see us since. Obviously, with this tour, we know people are here to see Pixies, which is fine. But it's also a perfect opportunity for us to reach out to even more people. Like tonight for example; I think this venue holds around 2000 people and lots of them saw our show. If only a small percentage go and tell their friends about us and they bring their mates to see us the next time we play in Leeds or wherever it makes these shows all the more worthwhile.

What are your plans for next year?

DA: We're going to end this tour by going into the studio for one day. We want to do something and jam just for fun. We've played together so much now that we just want to go into the studio for a day and see if anything interesting happens. Then we have a tour lined up for February and March.

You've been playing a new song ('La Guardia') in the set since the summer, which is quite heavier than most of Means. Is that representative of the direction you're hoping to take with the new songs?

DA: I'm not sure yet, but we do want it sound a little bit heavier and maybe a little less poppy.

How many new songs do you have at this moment in time?

DA: Too many! Obviously we've been touring a lot which is great, but it's also a problem because we can't write as much as we want to. So that part takes a lot more time. We still do write and create a lot on tour. We don't have lots of finished songs but we do have the basis for a lot of songs so I don't think there will be any problem in creating a new album. I'm looking forward to it and, since we've been playing a lot live, I think we can tell what works and what doesn't straight away. There are songs that we want to write which we might not want to play live. Then we have songs like 'Ill' for example, which isn't radio friendly but it's a great song to play live. We'd play that song for forty-five minutes if we could! This is how we want to sound but at the same time, we need the pop songs as well.

Are you aiming to release the second album next year?

DA: I don't know to be honest. We have our first ever European headline tour in February and March then will probably go into writing mode in the studio straight after that.

Are you all still based in Malmo apart from Jay (Clifton, bass) who lives in London?

DA: Officially we are, but I'd say we're pretty much based in London now. We rehearse in London, and our management and booking agency are based in London. Every tour we do starts in London, and even though this one started in Vienna, our last show is in London. I'd say it's our base, but there's always that money thing isn't there? It's expensive to live there; even though we don't need much, so for us it makes sense to be there, but not if we spend money we can't really afford on a place and be away for ten months a year. It's definitely a struggle. We recorded our album over several periods last year, but the main period was during late November and early December. It was funny because Fred (Rundqvist, guitar/vocals) lost his passport so our manager said he couldn't leave the UK because he might not be able to get back in, and we had a month's worth of recording scheduled. So we just rented an Airbnb and the others stayed here while I went home to Sweden and brought some clean clothes back for him!

You also have a solo project, Summer Heart. Are you working on any new music for that?

DA: Fews and Summer Heart are very separate things, so I try not to mix them too much. I don't really talk about Summer Heart when I'm talking about Fews but there will be some new material out shortly. I've been working on new songs for the three months Fews had off this year. It's a weird one because Summer Heart isn't that well known in Europe, but it's doing really well in the States.

I don't think many people realise just how much hard work goes into being a musician, particularly when you have more than one project on the go.

DA: The thing is, I really like hard work. I think it's become more difficult to be legendary as an artist. You need to keep it up and be constantly out there making music and touring. Very few artists become massive stars overnight.

How many shows have Fews played this year?

DA: I don't know the exact number but it's definitely in the 100s. We've played Eurosonic and South By Southwest, toured with Spring King and Fat White Family, then played Great Escape, Dot To Dot and loads of other festivals, did a UK headline tour and finally these shows with Pixies. So we've done a lot of shows and played more than one set at many festivals as well. Next year we've already got around fifty shows confirmed and that's before we get into the summer or start thinking about festivals.

What's been your favourite other band or record of 2016?

DA: That's a really difficult question because everything I've listened to this year has been old. Actually, I've been listening a lot to Amber Arcades. They're really nice people as well. Me and Annelotte (De Graaf, Amber Arcades) keep in touch a lot and they were over in the States when I was there recording the Summer Heart tracks; we arranged to meet up but didn't manage it in the end as were both so busy. This is a question for Fred as he's really up to speed when it comes to new music.

Fred Rundqvist: I've been listening to this great band from Berlin called Diät. Also the Preoccupations and Cold Pumas records are great too.

DA: When I listen to something new, I'll play it for a week and then I tend to move onto something more familiar after. I try to listen as much music as possible. I listen to a lot of hip hop and electronic music as well as guitar based stuff.

That doesn't surprise me as Fews sound is quite difficult to pigeonhole into any one specific genre.

DA: Lots of people have said that we don't sound like anyone in particular. That we sound new somehow. Still with reference points but nothing too obvious.

The way yourself and Fred swap vocal melodies during songs for instance.

DA: That was something I initially questioned myself. I thought, "Should we do this?" But it works really well. I was afraid we would sound like two different bands at the same time. I like a lot of hip hop and electronic music. Stuff with lots of repetition going on where you add layers to that. We have that a lot.

What are your plans for Christmas?

DA: After the tour we're just gonna stay and hang out in London. Go into the studio for a day then meet friends, have a party to celebrate this year pretty much. Then I'm going home to not listen to music. Have no crisps or raw vegetables with dips, maybe work out a bit. I'm a vegan, which works great when I'm at home or in London, but is a nightmare when we're on tour.

For more information on Fews visit their official website.