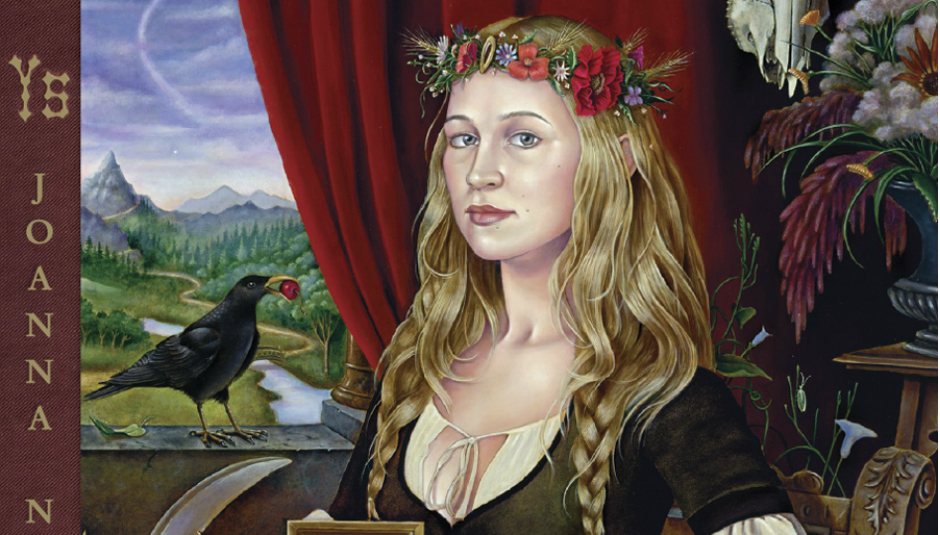 Ys, Joanna Newsom's second record, celebrates its 10th birthday this week, and if that seems incredible, there’s probably a good reason for that feeling.

Coming at the end of 2006, the second half of what by then we knew would be a George Bush elected, war-ridden decade, this was the year American indie acts took control of the public's conscious. In the first half of the decade, guitar music was still largely hungover from Britpop. While this era's most successful exports The Strokes, The White Stripes, and Interpol all offered a "new" American sound, they still owed quite a bit to the Brits who had come before them. Meanwhile, British acts like Radiohead and the then young upstarts The Libertines still had a large stake in being recognised as significant parts of this now transatlantic scene.

However, the success of The Strokes in particular (along with the 9/11 fallout they and many others faced) saw a shift in tastes not seen since Nirvana announced their arrival ten years earlier. Thus, in much the same way, labels started to look elsewhere to "sign the next Strokes", much like the fallout of "Grunge" in the 90s, and audiences did the same. A time of vast political and cultural change, along with faster Internet modems, saw music become more accessible and harder to define. As a result, Indie labels started to get much more attention after two decades of plugging away, and DIY scenes finally started to come to fruition as people began to discover different styles of music which would later become the umbrella for "indie" music and what we recognise now as the rise of the hipster.

The first few years were pretty inconsistent; The Strokes and White Stripes inevitably became festival-headlining mainstream acts, but no one yet stood up to fill the gap they had left behind until 2004. Canada did particularly well during this time, setting up arts funds to nurture its young talented musicians, and following the example given by Broken Social Scene before them, along came Arcade Fire with Funeral and the cultural world changed in an instant. Perhaps in another time, Arcade Fire would have been laughed off as too earnest and too over the top. Perhaps now would be that time.

All the same, they took off and "American Indie" was now a force to be reckoned with. They represented an artistic scene and sound in their native Canada, and this was something also seen in New York with "dance-punk" made popular by The Rapture, Clap Your Hands Say Yeah!, and LCD Soundsystem and, also crucially, "freak folk". This was an extremely loose and vague term, but what it broadly meant was indie artists who took folk influences and turned them inside out (often using electronic devices) such as Animal Collective and Grizzly Bear.

Despite hailing from the other side of the continent in sunny California, Joanna Newsom and her parent label Drag City were given the same broad tag. People recognised a difference, but the label's most prominent member, Smog's Bill Callahan, was seen as a vital contributor to this new sound. Newsom released her debut The Milk-Eyed Mender in 2004, and due to her distinctive sound, was recognised pretty instantly. While her child-like voice was a bit too much for some, almost everyone who heard it instantly recognised her talent as a songwriter and composer and as an artist to watch closely in the future.

Fast-forward two years, and Newsom more than delivered on that promise. Over the space of five long-form tracks, Newsom announced her arrival as an important and vital artist, answering those who dismissed her first record as "childish" due to writing odes to her recently deceased dog Sadie by creating a magical piece of work, Ys, and along with it, announced American Indie music as the dominating force for the rest of the decade. The short-lived "freak folk" tag could no longer be applied here; Newsom had created something of a contemporary piece of classical music from her harp, while composer Van Dyke Parks conducted an orchestra who only ever accentuate but never exaggerate.

Ys and Newsom's greatest triumph, if nothing else, is to take the listener on a journey through what would often get dismissed as "difficult" music. Just take opener 'Emily', a song which explores the stars and indeed the entire universe, but is always brought back down to earth by the singer's real-life sisterly bond with Emily, an astronomer who provides backing vocals on her own track. Musically, Newsom's harp, along with the orchestra, take us on this journey, inviting the listener to visualise the stars and the sister's conversation on constellations. Ys works because, despite the impressive vocabulary and musical arrangements on display, the listener never gets lost along the way; Newsom is right there pulling your hand through these allegorical worlds she has partly created, to cover the real-life events she is signing about.

Meanwhile, on 'Only Skin', the album's true epic, Newsom recalls childhood reveries brought to mind by her current relationship with the aforementioned Bill Callahan. Given what we now know (largely attained from her next album Have One on Me), 'Only Skin' is an especially difficult listen in terms of personal relationship strife, particularly in another meta-moment when Callahan appears on the track to provide backing vocals. While Newsom is careful not to reveal too much, her lyricism reveals a poetic quality that could easily be deeply analysed and discussed akin to much great literature. In this instance, our heroine lights a metaphorical fire to show the quality of her love.

The album's peak, however, is its centerpiece 'Sawdust & Diamonds'. This is the only track that features no other instrumentation or voices, just Newsom's and her harp singing desperately into the great void of death. Here she sings about the passing of a close friend in the year prior, and much like Arcade Fire, captures that moment of intense catharsis brilliantly. While the choruses are a sprint on the harp, she slows the pace down to reflect in a breathtaking section which to this day remains difficult to top:

Anyone who has seen Newsom perform this live will attest there isn't a dry eye in the house left.

So, ten years on, not only does Ys stand the test of time, it actually improves when considering what has come since. I believe 2006 to be the turning point where American Indie became a widely recognised, significant, and independent thing, a year in which TV On The Radio released Return To Cookie Mountain and Grizzly Bear put out Yellow House, both of which are arguably the bands’ peaks. But on top of this, this embrace of indie and folk music meant that in the following years, Animal Collective, Fleet Foxes, and most significantly, Bon Iver had space to rise to the top of their respective games. Joanna Newsom would return to reclaim and solidify her crown at the turn of the decade with the incredible, 2-hour, 3-disc epic Have One On Me, and while that album is also a masterpiece, it is also a commitment to listen to. In comparison, the relatively light Ys flys by and, for many, remains her greatest achievement.